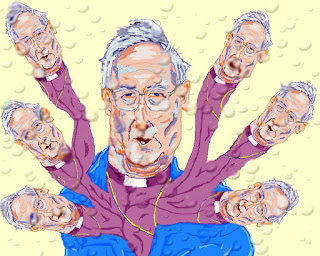 Quite interesting. Carlisle voted for. That's where they've had that fundy bishop who thought that heavy rainfall resulted from increased public homosexuality. So that's the sort of vote the Archbishop of Canterbury can rely on. There's also a yes from Coventry and that has an Open Evangelical diocesan bishop. Four were against, with both clergy and laity in liberalish Ripon and Leeds, heavily rejected in liberal Southwark, laity and clergy heavily against in liberal leaning Worcester, and although Bath and Wells was closer against the bishop house also voted against (a tie in Southwark).

Norwich, Liverpool, St Albans, Chester, Ely, Lincoln, Oxford, Blackburn, Exeter, Guildford, Peterborough, London, Manchester, Southwell & Nottingham, Chichester, Newcastle and York are still to vote and I can imagine three more obvious noes and about the same yesses. Others will predict better. I can hardly see Lincoln voting for, though the new bishop might, and it is just five more noes to kill the Covenant.

Many a bishop must have walked through the yes lobby knowing that the others were going to vote no. What pathetic leadership.

I've no idea what happened to that second motion, the one that asks bishops to look for ways to strengthen the Communion!
Posted by Pluralist (Adrian Worsfold) at 18:47

The bishops in the Church of England are out of touch even with their own clergy. It's sad that 82% of the bishops follow the herd instinct. You know there are bishops in the bunch who believe the covenant is a mess of a document and not the solution to the disagreements in the Anglican Communion. As Jim Naughton of the Episcopal Café said, it's "governance by hurt feelings".

The following motion passed in Southwark, with an amendment making it somewhat clearer that the first three sections of the Covenant were fine. I voted against that one too.