Recently, the Rt. Rev. Cameron Greggs, changed sides regarding the Anglican Communion Covenant. He was interviewed by Huw 'the Newsreader' Edwards, the most verbose newsreader in the world. [Note: in the real world, someone similar has put out an argument that is easily countered point by point.]

Huw the Newsreader: Is your change of mind due to anything to do with coming over to Wales from England as you did when you became a bishop and was elevated as it were? Would you like a cup of tea?"

Cameron Greggs: This has got nothing to do bung with moving from humm the Church in England gung to being hung in Yr Eglwys Yng Nghymru mum Huw.

Huw: You've got a lot of Churches haven't you in Anglicanism, but it is not one big Church isn't it? 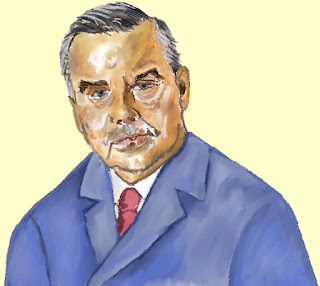 Cameron: Forty Three, wee, Huw, Puw, Barney McGrew; there are, in the Anglican Communion - that's Churches indeed don't you know and I think now well that's a lot of diversity isn't it, Huw, yes. So we would expect, wouldn't we now, all sorts of differences of view about human sexuality, with women bishops and lay presidency at the Eucharist and all that sort of thing ding. Let me just have that panod o de, diolch. So, like, the teapots we call Anglicanism, a few have been dented, now, we do know, so it's like this isn't it.

Huw: Iawn. Well bishops, primates, lots of important people and we can count them on the fingers of a few hands.

Cameron: 200 bishops didn't go to Lambeth Conference and I don't suppose this Covenant would get them to go to the next one either.

Huw: Primates - and viewers, ladies and gentlemen, boys and girls, this means bishops in charge of Churches, not our animal cousins swinging in the trees. I mean, Cameron Greggs, they were not attending...

Cameron: I'm sure the 7 primates who didn't join the Archbishop in 2011 won't be persuaded either by this document.

Many attended the GAFCON thing in Jerusalem, and I'm sure they much prefer their confessional statement to our Covenant which is not confessional at all, well not except when Churches or their high representatives (like me) step out of line. That's when people confess, and video confessions are perfectly acceptable.

But of course this is my confession. I think the vote is going against us, so I am getting in my confession now.

Huw: So you are jockeying for position? I'm sorry to have to ask you that.

Cameron: No no yes no. Well, now, three people resigned from the Standing Committee on principle, which is quite something in Anglicanism, you know.

So I changed my mind really because, to summarise what I have said already, the Covenant that is yes my baby is not going to make a damned or saved bit of difference to anything much isn't it. No. Yes, sir, here's my baby but I may as well put her out for adoption though nobody much wants her I can guess.

Huw: Of course there are lots of covenants about.

Cameron: Do you know, Huw, that when I kept writing all those bloody articles, I don't know why but I kept writing 'convents'; it must be how my fingers are wired to my brain, and the spellchecker was no damned good but I pressed on regardless. Lovely tea.

Yes, but the thing about covenants between denominations is that none of them tell the other denomination what to do. None of them restrict, whereas this one I drew up with other very high level people was all about submitting your plans for change to a central body to make decisions, and the idea was to put the brakes on before a decision was made. That's right. Because no one who wanted to be on the inner ring would want to be told they must go to the outer ring.

Huw: So it's like no one on the North Circular Road wants to be told to use the M25.

Cameron: Hey? So the Covenant won't restore trust. And I thought, humm, if Christians don't recognise faithfulness in other Christians, what difference would this piece of paper make? Would anyone be fooled that there was a uniformity among Anglicans because we can wave this piece of paper about.

Huw: You are reminding me of Mr Chamberlain off the plane from Munich. Not personally wrth gwrs but from the newsreels of the day, you know. Now do you prefer chocolate hobnobs or bourbons?

Cameron: I'd better keep off the biscuits, Huw. I once thought the Covenant reminds Anglicans of what does unite them, but then we already have the Quadrilateral.

Huw: The whatilateral? Is that quad like a yard at the back of Lambeth Palace? Is there a plaque there or something like that at all?

Cameron: Oh no no yes no. By the way, Huw, in my bag I do have some cakes. I can't have any myself, isn't it, because I am a bit well roly thanks to the family firm.

Cameron: And we have our Hooker too, you see.

Huw: What? Is she behind Lambeth Palace in the yard as well?

Cameron: No no no yes no. Scripture with reason and then tradition and then five marks of mission.

Huw: I can imagine she has, perhaps with needles and drugs and all that kind of thing, your Hooker, in the yard like.

Cameron: And of course the Covenant just repeats this and then well, no way is the Section four just nuts and bolts is it. It's nuts all right and might get you by the nuts so to speak, isn't it, but the idea it's soft is not soft, though we did say it was soft and essential.

Huw: Well let me just challenge you about that, if I may. There are things in life that are soft and essential. I mean, I need that quite regularly you know since I started eating muesli in the morning.

Cameron: OK, so the Covenant could just be soft and essential like that, but normally to say something makes so little difference and yet is essential is rather a contradition. And I realised this when I kept trying to use the argument previously you see.

Huw: What might be called the toilet roll defence.

Cameron: Indeed. I noticed it was being used a lot, and it was rather a gift to the other side of the argument. So really the Covenant doesn't make a better way of doing business, nor does it make no damned difference, but it makes potentially a big difference depending on a bureaucratic ethos taking over as often does happen.

Huw: It's something that broadcasting and the Church might share. Don't you think that? Now have you finished your tea there. Do you want another?

Cameron: No yes no. I'm not stopping long, Huw.

Huw: Twenty four hour news, you know, and we have to fill it with something. The pot is still hot.

Cameron: No yes then. You be mother. You see, the Covenant tries to force people to have conversation, consultation, and co-operation but do that and they not having that are they? I can imagine a conversation like: I want to bless gay relationships. If you do we cut you off. Well if I don't will you talk to me? No, there's nothing to talk about so long as you don't. Humm. So I thought about that, and confess I got this wrong bong.

Huw: Look now. I have to ask you at least gently you see. You did accuse the other side of being hysterical. In fact did you not call them murderous Nazis once? Did you not say, once, 'These people are the lowest of the low; how dare they oppose what we are deciding?' or did you not say that?

Cameron: Well, this is part of the need to get my confession heard. Yes. I accused them of being unAnglican. Others have said they are Baptists. Some have said they are closet Unitarians. Ok, some have problems with Covenants, like the Scottish and New Zealanders, so they said a Covenant was unAnglican. And of course, as I now see, to them it most definitely is unAnglican, though we did try to make the Covenant a bit unCovenantlike like humm.

And yes there is this expectation of submission to a central processing area for controversial actions. We know that if we had to formally change canons and constitutions then a number of Anglican Churches could not adopt the Covenant, and some if adopting it willingly might actually change canons and constitutions. We knew that but didn't want to say so. And of course,in changing my mind, I admit that the effect on the Church of England, providing the Archbishop of Canterbury like it does, could indeed slow it right down when the Standing Committee offers advice where a development threatens unity, isn't it now how.

Huw: You honestly thought that the Instruments of Communion would be like the United Nations. Are you saying that now?

Cameron: Well, nag ydw, but the difference is Security Council members each can veto the UN, whereas in our Covenant case the centre could in effect attempt to veto the Churches action. Look at it this way: a member state vetoing a resolution doesn't get chucked off the Security Council, does it now? But if a Church attempted to veto the Standing Committees attempt at a veto, it could suffer relational consequences isn't it.

It's that which allows the big boys to say no you can't, and expect you not to do it, and of course that is directed at the US and Canada mainly, and we ought not to try to deny it though we didn't actually to be fair.

I used to argue for it on the grounds that, I think I said, 'the covenant is pretty hopeless - there are no effective anathemas, and no effective sanctions' but of course that was trying it on well Huw.

Huw: Well, just before we finish then, and go and see what the weather is doing, a "No" to the Covenant doesn't say: 'We can't say what it means to be Anglican, let's ignore our sister Churches when it suits us, and so what if up to half the Communion walks away.' What do you say about that?

Cameron: I confess that others, like me now, without a Covenant, can identify Anglicanism, are interested in the different Churches in the Communion, and are concerned with actually opening up dialogue where it has perhaps shut down. So I think I have changed my position, now that the English dioceses are voting as they are and could do still and I suppose I want to be ready for that, indeed.

Huw: Well, thank you very much for coming in and talking to us. That was Cameron Greggs talking to us there about why he has changed his position regarding the Anglican Communion Covenant when he was one of those - would you say - remote and high up people who drew this document up and then expected everyone to rubber stamp it but they are not, apparently.

Cameron: It would have made my life a lot easier. Thanks for the tea.

Huw: Iawn. A diolch yn fawr so much for the cake.
Posted by Pluralist (Adrian Worsfold) at 07:27

A lot of fun, Pluralist; but with more than a slice of veracity.
Agape.