Now Saturday is upon us again, and I shall like many be awaiting the news of the dioceses involved in voting on the Anglican Communion Covenant. These are Blackburn, Exeter, Guildford, Lincoln, Oxford and Peterborough.

There are still some dodgy practices taking place from above in terms of one direction of information only (that is: for the Covenant, with no presentation against) but people elected to Synods are well capable of making up their own minds.

We referred to the Anglican Communion Covenant several times in our In Depth Group when I was at Barton. No one thought anything of it in positive terms and I heard clearly that the parish view under development was that the rules of behaviour and belief were sufficiently set down by Anglican formularies plus relationships and there should not be any more. There is even a rumour that the presentation in Lincoln diocese is going to be one-sided. I can hardly believe it - if it is true then the 'powers that be' really must be daft in making it appear that they regard synod members as automatons or just mugs.

Those interested have all been talking about this Covenant for a long time and if the presentation is going to be so obviously one-sided then the equally obvious response is that this indicates what a pro-Covenant Church will be like and why it should be disposed of straight into the legislative drainage system.

Let's be clear about this. We weren't anti-Covenant because there was a bishop then (John Saxbee) who'd indicated that he'd talk about it but wouldn't accept it. We were anti-Covenant because we reasoned ourselves that it would prevent the Church of England being responsive to its own situation. It would freeze, and offer itself and Archbishop to be 'in' and regulate the brakes applied by other members of the Anglican Communion in very different situations. 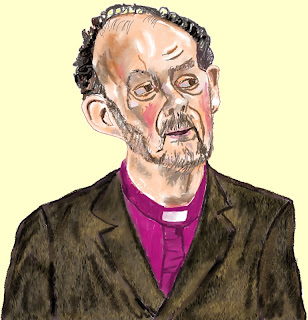 The Covenant has sufficient text for others to wave it about and demand the freezing of initiatives until slow discussion processes have been worn through, with only then some centralised verdict produced about what is and isn't compatible with the Covenant. This itself interferes with Synod decision-making processes. If the links are there with other Anglican Churches, then the views of others will percolate through to such decision making processes within the Churches. For example, now, with links to New Zealand and Hong Kong - how are they to be isolated as outside the Covenant if the Church of England is inside it? Rather, the argument has been: drop the Covenant and then all get a chance to be in on the many ways discussions take place.

And as for GAFCON responding by taking on the Church of England, then do a Neil Kinnock regarding them. If they are out to overturn the Church, then deal with them appropriately.

Look, I'm a liberal and really outside the boundaries of the Church of England. I can make my argument as a sympathiser, but I am now in a liberal Church. If you are outside the boundaries then better to be honest and clear. If I wanted advantage, I'd say have the Covenant and the liberals can become Unitarians (we'd have ordinariates of Anglican practice for free liberals!) but instead I retain the view that I held.

And with any luck two dioceses will vote no to the Covenant and this Saturday will see it dead for the Church of England and crippled internationally. Good luck voters: enjoy voting!
Posted by Pluralist (Adrian Worsfold) at 04:44