So Lesley has had a dodgy dream, and a number of commenters have analysed it, including me.

I analyse dreams on the basis that our brains create narratives that try and ease the way ahead based on what we've been doing.

I did have a remembered dream last night.

I was driving in the car I have, with my (now deceased) mother in the passenger seat. She was more capable than in her dementia days, but she plays no significant part in the dream. We are driving in an area of narrow, straight roads, in an area partly like the roads north of Goxhill up to the Humber, and partly like going to the East Coast. There is another car driver, a chap named Roger Strachan (pron. Strawn), long deceased, who used to uphold Christianity in the Hull congregation and regard me as a trouble maker. In fact in 1994 when I returned to the church he virtually, not quite, told me to clear off.

He is driving along too, and it is obviously some sort of day out. He then overtakes and races down this narrow road, which I looked at and found reckless driving. I went much more slowly, slowing for oncoming traffic. Eventually I passed him, in his car, parked in a field, near the 'attractions' (I'll call them here); he's on his own but there are a number of people milling around. There is a visitor centre somewhere. It looks like I'm taking my mother on some holiday trip.

The attractions are, however, like some of the concrete bunkers you get at these desolate river and coastal sites, but people were milling around. 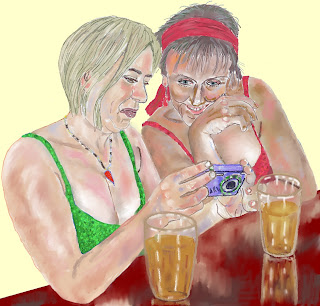 There was a wooden jetty above. In one of these bunkers, with a narrow corridor, with thick concrete either side, there was a band playing and people singing. There may have been Rebecca Pashley in amongst them, one of my drawing 'victims' of recent times, along with Alison Kaan the daughter of a hymn writer. I was looking around for toilets. Incidntally, in real life Alison told someone about me who then became another Facebook friend - she is Anglican and is thinking of being more involved with the Unitarians. I'd been looking at Rebecca Pashley's singing schedule last night before I'd had enough of gazing all over the place via computer.

So what was all that about then? Well I sat on the bog and picked up my diary to write it down, as I knew instantly what it was about.

It's about me going to Unitarian College tomorrow. I'm going to a no-commitment-either-side meeting of potential ministry trainees. Of course I was selected once, and spent a year there, only to be removed on the basis of not matching the denomination - where would I go, one of my reports wondered.

So I am going slowly, this time, and there is my opposition and racing ahead, but he is isolated. I'm wandering around some clapped out places, old bunkers and the rest from the past. It is of the past, because there is also a hint of both New Holland and Withernsea about it, and this is now left behind and gone (I've not been back other than for one detour soon after leaving).

All I am doing is looking around, but look - there is my current congregational role, which is the music and the choirs. The jetty above goes to, well probably nowhere.

I've told no one locally that I am going to Unitarian College to listen and see - recent blog entries have been a test of if this blog is read by locals (answer being probably no, not regularly anyway).

What the dream demonstrates is my ambiguity about the whole thing. I'd put myself forward but I am no fool, and I was too ignorant and optimistic about the denomination when I went for training. I learnt a very sharp lesson. The fact that I am looking around old bunkers and desolate stuff might suggest what it is about - and is a visitor centre something of a idealised vision unseen?

My opposition raced to the site but then had no interest. Job done. He is - I'm hoping - of a generation of cliques that have largely gone. The people now realise that they have to push the unique selling point. I think the visitor centre is the denomination and its publicity.

So there we are. Dream on. Lesley wasn't in the dream. Nor anyone else than those mentioned. It was just someone of the past, my mother as passenger, and at least one representing music.

Other interpretations might be interesting, but I'm happy with my own.

Posted by Pluralist (Adrian Worsfold) at 17:35

I once had a dream in which my husband was speeding and putting all our lives in danger. I think it was because he was working too hard at the time.
When I woke from the dream (about 5am) I then woke him up to tell him off about his behaviour in the dream. Apparently (because I only vaguely remember it) I had a real go at him and he lay in bed feeling resentful for the next hour and a half, I'd gone back to sleep! He thinks it is a bit harsh that he gets told off for things he does in my imagination.

I think my now distant wife found me more interesting in her dream life than in reality.

It's a bit disturbing when you are googled and one of the first things that comes up is your dodgy dream, Adrian....