On March 7th I attended the Requiem Eucharist that marked the return of the bones of those buried at St Peter's Barton-upon-Humber between around 950 to 1850 CE. The church is operated by English Heritage, and the bones are kept where the organ was in temperature controlled storage in individual boxes. 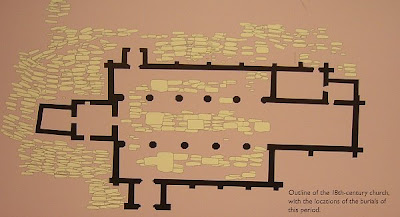 The service was based on the first Prayer Book of 1549, the Eucharistic Prayer had to be from 1662 (the music for the Eucharist came from John Merbecke of Beverley for the 1549 Prayer Book), the Bible was the 1611, and there as music that was originally in Anglo-Saxon, and the Lord's Prayer was heard in Anglo-Saxon and Latin as well as in English. Hymns dated from between 600 and 1270 CE. The eucharist used a mobile altar table where the old altar was positioned; the altar as was at the end of St Peter's regular use (the 1970s) and the choir stalls in the chancel came into use during a late section of the service particularly focussed on those bones nearby. 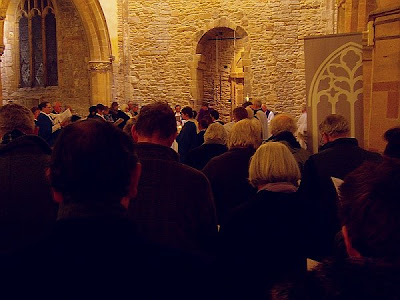 This picture shows preparation of the Eucharist. Click on it to see it a little better. I took pictures through the service in restricted lighting conditions. One below shows a movement to the other end of the church, the newer location for the altar table before the church closed for regular worship. 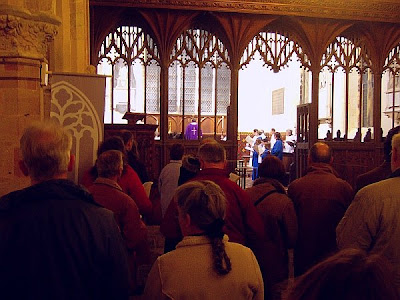 A video camera (looked to be broadcast quality) recorded the whole service.

Then the next day (March 8) came the Mediaeval Banquet, provided by the youth group and its leaders E1W (Every One Welcome). Those Mediaeval young people and helpers did know how to cook. I wore my green and gold gown, which, ahem, sort of represented Paganism or, as someone pointed out from all its symbols, is a bit iffy. Someone came dressed as a former Pagan who had just converted. But I had some Pagans around me, all right, or perhaps I went to them. There was much in the way of foods, dancing and a general all round Mediaeval look.

St Mary's will join the twenty first century some time soon: well, Common Worship (2000) is still in that agricultural and feudal netherworld.


Note that I am intermittently without workable broadband at present, and so heavily restricted. My provider is Tiscali and I can only describe the service as appalling for the last three evenings (it was stable daytime today), and the advice via someone in India yesterday late was worthless. I will blog more when the broadband becomes usable again: I shall of course be changing provider. The fault started with some engineering work but now they claim it is all solved: however, you cannot speak to anyone who actually responds to situations.
Posted by Pluralist (Adrian Worsfold) at 01:38

Interesting. The BBC World Service ran a story on this event.