This is what Peter Jensen has told everyone

The words "death is so permanent" are actually not true. After Jesus was put to death, he came out of his grave [my italics] - not as a ghost, but as a whole person. He did not merely survive death - he conquered death and he did it for us. When you trust in Jesus Christ, you are trusting the one person who can take you through the greatest calamity of life and bring you safe to the other side.

I think that is pretty clear. Here are the words of Rowan Williams (which are not, which is why there are more of them):

Easter is not about denying death, and the resurrection doesn't make the nightmare death on the cross unreal. Death is exactly what the artists and scientists and psychoanalysts say: it is a full stop to human growth and response, it is night falling on everything we value or understand or hope for...

When we look at death, we look at something that can destroy anything in our universe - but not God, its maker and redeemer. And if we accept that we shall die and all our hopes and schemes fall into the dark, we do so knowing that God is unchanged. So to die is to fall into the hands of the living God... 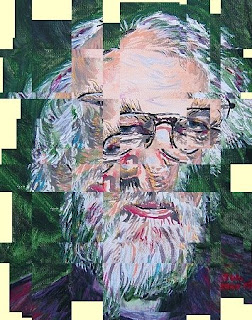 The Easter story is not about how Jesus survived death or how the spirit of Jesus outlasted his mortal frame or whatever [my italics]; it is about a person going down into darkness and the dissolving of all things and being called again out of that nothingness. Easter Day, as so many have said, is the first day of creation all over again - or, as some have put it, the eighth day of the week, the unimaginable extra that is assured by the fact that God's creative word is never stifled or silenced...

The vital significance of the Church in this society, in any human society, is its twofold challenge - first, challenging human reluctance to accept death, and then challenging any human acceptance of death without hope, of death as the end of all meaning. Death is real; death is overcome. We are mortal, and that is basic to who and what we are as humans. But equally we are creatures made so as to hear the call of God, a call that no power in heaven or earth can silence.

There is a lot in between all of that, and around these selections, but Rowan Williams is saying we do die, completely, and should face it, and Peter Jensen is saying Christians do not die completely and don't have to face it as we come out on the other side. Williams is saying there is hope in God (presumably for the mortal Jesus too), and Jensen says Jesus came out of the grave and Christians too will beat death (which is why they shouldn't bother with ghosts).

So, to make the myth work, Jensen says it is simple, and Williams says it is not as people do die. For Williams there is:

...the sense of a glory embodied in our mortality because it has been touched by God. Death is real; death is overcome.

For me, neither of these work. Jensen is talking claptrap and Williams makes no case at all. Death, he says, is not the end of meaning. Meaning interests him, as does narrative; but if meaning comes with biological, talking people, as it does, then death is the end of meaning, except for those still alive.
Posted by Pluralist (Adrian Worsfold) at 19:54

"Archbishop of Easter" is presumably a typo for Archbishop of Sydney. His Easter Message certainly doesn't suggest he knows what Easter is all about.

Or maybe he should be translated to Easter Island. Preferably without a dug-out canoe.

Thank you. I've had to correct the error and it was offering him a rather grand status given his obvious ignorance of the use of any kind of scholarship.

Williams is close to Barth, who stresses that the Bible presents humans as thoroughly mortal beings. The early Church believed that God was bringing abour a New Creation, calling the dead to life, and the things that are not into being. What empirical warrant did they have for this belief? Encounter with Christ in the Eucharist (perhaps the basis for the Emmaus story and the upper room appearances, and even the appearance to the 500 mentioned by Paul), the joy of being filled with the Holy Spirit, the belief in the forgiveness of sins in Jesus' name (Rom 3-8). Paul on the way to Damascus did not just see Christ, rather Christ appeared to him, taking the initiative, CALLING and CONVERTING him. This turn about in the lives of individuals and communities, not caught up in a dynamic Kingdom-oriented process, is another aspect of the empirical impact of the risen Christ.

Flimsy warrants? Does it all hang on too slender a thread? Well, the total NT witness seems a more solid basis for faith (coterminous as it is with the entirety of the Xtian experience) that the alleged empty grave and the attempt to take the mutually contradictory appearance-narratives literally.

He could be close to Barth, if Hans W. Frei accurately represents Barth in Frei's postmodern narrative of the biblical text without objective root. I often wonder though if Barth would agree with this approach. I actually think Williams is more positive about culture and religious culture, and you see it with him talking about other religions and indeed multiculturalism. Such is not Barth's position.

You say Christ appeared to Paul, calling and converting him, but then that you take the Christian witness as a whole. There is a contradiction there, and also the question has to be asked if it is taken as a whole then how is it rooted? If it is not rooted in history, for which individual events matter, then what is this 'theological space' and how does it operate? It's possible, but I don't know the difference between that and saying there is a tradition as a whole. What is an 'encounter' as a whole, for example? For me, the 500, or 120 in Acts, is one of those numbers that represents something and here it is the congregation, the faithful: that makes the 500/ 120 exist 'as a whole' and tales it out of history but there is a sense in which you seem to want it both ways. An 'encounter' that is its own evidence is a tradition, even a young and dynamic one.