A Eucharist of Requiem at the Church of St. Peter, Barton-upon-Humber, held to mark the return of the remains of those buried there from about 950 to 1850 CE on March 7th 2008 is now online.

It can be accessed directly here.

The service is as in the booklet given to members of the congregation with a few extra titles and reformatted for web viewing similar to some other pages on the Spiritual Area. 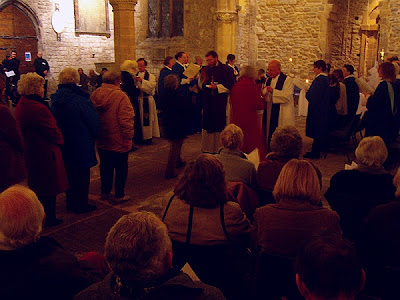 Posted by Pluralist (Adrian Worsfold) at 04:50

Is the centre figure Fr. Rowett? Pity about the stripped walls, tho' Nice picture. Thanks for posting it.

It is. Alan Wright, David Rowett and Ernest Hepworth.

Controversial point coming up. Isn't it better without pews? The lighting (our eyes adjust better than cameras) bring out the walls well. One photo I took makes the St Peter's church look like some ancient abbey - and it is ancient.

Without getting into detailed history of nave pews yet again (late medieval; usually not many of them) I would say unquestionable far better without pews. My congrats to Fr. Rowett next time you're in touch.

The walls were scraped late C19. Believe it or not in about 1850 some clown bunged a W Doorway in (in AS style) because he believed that 'All AS Churches' had a W door.....