It is interesting coming back to a congregation after some years, as I have with a Unitarian gathering. It is quite small, but seems to be at a point where difficulties of the past have ended and could move on. 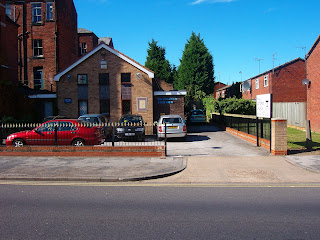 There is historical money for a minister, and the group seems to want a minister. But before doing this there will be a Congregational Assessment, a sort of examination of its characteristics using, in part, the well-worn SWOT approach.

On the Sunday a former General Assembly President concerned with these matters paid us a visit, and the service was taken by a Wakefield member, confidently presenting to and involving the congregation in the worship theme of The Secret Garden. In theological terms the worship presenter that day comes from the Romanticist neo-Pagan side of the denomination, though her Ph.D was on Christian-Muslim relations where the Muslims thought she was a Christian and the Christians thought she was an atheist - as she examined the difference between friendships and assumptions in the churches across faith lines in community settings and the rather unapplied and rarified pluralistic-inclusivist theology of the academic conferences - conferences that include interfaith worship sessions!

Although it was an open meeting, obviously I could not and do not wish to put a great deal about the meeting here.

Nevertheless it is a situation that surprised me, after years of being away, that the previous and now late minister, who began in 1955 and retired around 2000, has still a huge shadow across the congregation - this after two short ministries in between. It seemed to me, therefore, as there probably has to be thinking outside the box, that either a successful minister has to be someone confident in his or her authority and come with denominational experience, and so can handle these expectations, or someone, perhaps a student with a minister mentor, on to whom no expectations would be given. Whatever, there is not a lot of choice and, normally, not so many vacancies.

Among quite a few comments made by me, I did mention the parish church I attend and how its appointee had moved it in a broadly Anglo-Catholic direction, after a long ministry before him, and has a kind of authority in post, but in a liberal-democratic setting an individual of opinion (and additionally unable to relate to the breadth of the congregation) could lead to fracturing and argument. One person indeed was asking for proper space to be given to the religious humanist perspective (which it gets now with the members, friends and outsiders taking services). A new attender was able to give a viewpoint outside the shadow: he never knew him, or the two ministries in between, or indeed some of those who once attended and do no longer, as well as those who have died.

It s a tall order, following a very long ministry, and one in which that individual became a Hull person, with his own other job, with his own home and family, a part time minister most of the time who was much more, and who - with the vocation and his personality fused - resisted retirement (but involved others as it approached) and who did have this breadth of approach and clearly related to the congregation. Then add this to the isolation that Hull can mean: the nearest Unitarian churches being Lincoln, Doncaster, Wakefield, York and Scarborough. There is a successful church in Manchester, where any appointee would be surrounded by colleagues, and yet it is having trouble appointing, with a long time minister retiring. Comparison was made with the very capable minister in the thriving Dublin Unitarian Church - and that is isolated if ever the was one (the Northern Irish churches are Non-Subscribing Presbyterian, thus ideologically narrower and Christian). But then there is still a supporting churchgoing culture (Hull is one of the most secular and resistant areas of Britain), the church in Dublin is well known, it is distinctive from the rest and a haven for another religious point of view, and (I would add) fits the modernisation of Ireland happening now. And how successful was the successful minister in his previous appointment?

So it is not just a question of money and, indeed, money is not an issue. So the congregation will, it seems (decide next meeting), take up a self-examination. The nearest Anglican equivalent is a parish profile - I kept a copy of the Barton one - and these are done before appointments. Such Unitarian self-examinations are also assisted by outside advice (as was this meeting to discuss this initial stage).

I think the 'solution' will inevitably involve some originality. Whoever becomes a minister, should one be appointed, will have to be an outward reaching one as well as doing all the usual duties of the minister, and be an enabler of the congregation. Part of the reason to have a minister is that he or she raises the profile of the church, but this one would have to be a facilitator so that congregation people do some of the roles of ministry. He or she could then be even more outward orientated.
Posted by Pluralist (Adrian Worsfold) at 16:22