I'm just going to milk this for a moment. These pictures were added to Facebook in the last two days. All the people featured here were 13 at the time and are 50 now.

The problem with adding pictures to Facebook is that, unlike here, when clicking on images, they do not necessarily reproduce at full size. 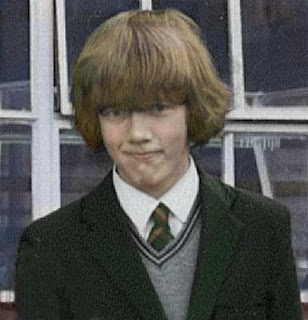 These three examples (and there could be one more, but not sure) are an example of taking an extreme close up of a physical photo and, involving graphical processes that lose information, trying to make most of what is achieved, and then adding relief and distinctiveness through colourising. Now colourising does not produce accurate colour: like photos of old they remain 'grey'. But that is not the point. The point is that colour adds to difference, and difference allows a picture to stand out in relation to itself and between the subject and its background - indeed across all its elements. It also adds to a process that has undergone editing losses. The expansion of a tiny picture by multiple dots per inch and by percentage expansion produces a blurry picture of extracted detail with the paper pattern and interference pattern showing through. 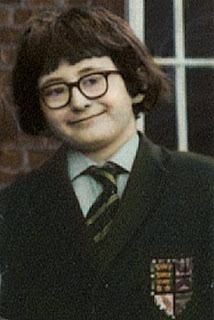 An unsharp picture rushes the picture into clarity, with the cost of almost a squares or brick like pattern to the picture. I then blurred some of that off, and sharpened again, to lose some of that pattern. However, colourising (at very hgh levels of tranparency - it is already a colour overlay) and with lightening and darkening tools, and some smoothing over the skin, does improve the picture. Incidentally, the severity of the patterning means that edge detection, the basis of producing a computer generated drawing, doesn't work. You can get away with a bad .jpg if the picture is also distinct, but the patterning from an extreme close up overwhelms most of the picture we still see.

So the images are here too as a way of seeing them full size in their expansion, and also as means of being found more easily. As for who they are, two remain drinking friends and more to this very day, and the two females have a past to be private 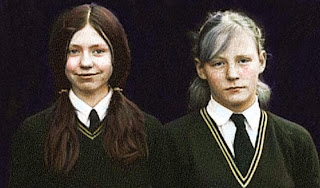 in public regarding me, but basically the discovery of this class photo is the recovery for me of their images. And the pictures are saved by first names not (former) surnames so as not to reveal or even aid Internet searching - but it will be interesting to find if anyone who knows them, or they themselves, ever discover these via the vastness of the Internet and via several or many still remaining friendship connections that span from here to either of them. Plus, whereas they may have dropped into the privacy of anonymity (and can keep it that way) I am rather more of a public Internet presence given this spidered blog and large website.

Once again, here, pictures are revealed as full size when clicked on.
Posted by Pluralist (Adrian Worsfold) at 06:05