I am honoured to have been sent the text by Mark Townsend of his book (2009), The Path of the Blue Raven: From Religion to Re-enchantment, Ropley, Hants: O Books.

It is the story of a priest tired with Churchianity, whose personal events facilitated ongoing theological tendencies and change. A marriage broke down, and he had an affair with a married woman. 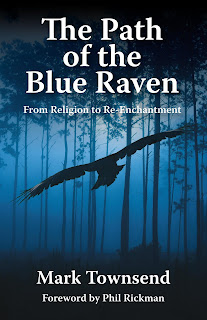 This was all unconnected with his second marriage, but he wanted to be honest with his Bishop. As a result, the bishop came back to him and denied him his next full priestly job, so that he and his new wife dropped into poverty while she tried to develop a business and he became a cleaner of toilets among other things. He also developed his skills as an illusionist, a magic he saw as connecting with the greater magic in the natural world. From the beginning of being a priest, he wanted to be open and broad about his theology. It had been Pentecostal in his earliest Christian conversion days, but going to the Holy Land saw him more interested in the magic of the appearances of the Christian religion than the closeness of biblical texts, and thus his later liberality was a joining to what can be labelled the more esoteric. Rites of passage were central to his ministry, and he bent around how he did them to suit the people involved rather than the Church authorities, about which the people were very grateful in all their religious and secular diversity.

Reactions to his developing his childhood interest in magic in the church world as a visual device included children who could see very well that this was an illusion and wanted to know how they could do it to stupid adult fundamentalists that equated this with the satanic. But during the phase of being ejected by his bishop, he performed his more developed and religion-inclusive Derren Brown type peformance to a group of Druids (he could tell denominations by colour and word association, and these Druids included Christian Druids who were church attenders). Such a coincidence was one of those life-turning connections that make up our autobiographies, and this book is very autobiographical including some lifted illustrative dialogues with himself out of his journal.

His continuing connection with ministry also happened because a woman he had helped with a secular bias in a funeral sought his ministry again. He assumed he should not do it, and then discovered that this is what happens - funeral directors do engage independent people as celebrants.

This is not (yet) a tale of someone on the road to becoming an episcopi vagantes. He includes one in his account of other people, Alistair Bate was a Unitarian of Druidic tendencies who went via the LCCI to the created LCAC and is a good example of an esoteric Christian (a fine distinction between the magical and the supernatural, particularly around the Eucharist, as set out by founding Liberal Catholic Bishop Leadbeater), who then has within Druid and other sides. He also still preaches to Newcastle Unitarians. The latter part of the book has many such examples of other individuals and their stories, categorised (slightly odd as the author dislikes labels), from those who range from mainly Celtic biased Christianity through to Druidry, and then adds in American Indian traditions for good measure.

The book is very recent to its events, and the actually biography is unfolding. It may be too close to events. Nevertheless, there are some themes in there that I recognise myself. A key theme is liberalism:

An ancient Christian doctrine that I have always appreciated is The Incarnation. Traditional Christianity understands this as the becoming flesh of God, the place where God literally steps into our world in the form of one man. However I have grown to see it as a symbol of what already is, as if there is a hidden divinity to humankind itself. So Jesus somehow represents what is true for all humans, and perhaps for the whole of nature too - that God lives in it and through it. (Townsend, 2009, 77)

This is the doctrine that was developed by James Martineau, the Unitarian Free Christian theologian from the late nineteenth century, of a general incarnation, not a particular one. The whole interpretation from Mark Townsend particularly focusing on ritual becomes such a naturalistic one, as it is.

The real power of baptism is in the symbol of being buried and risen which, of course, will happen time and time again throughout life. In life we go through many deaths, be it a death of a career, a relationship or a literal death. Jesus (like the many god-man-Christ-figures before him) is, in part, a powerful symbol of what is true for all humankind – life, death, re-birth. Baptism acts this cycle out, which is why it appears in many other ancient cultures beyond the world of Christendom. Jung would possibly call it a universal archetypal ritual. (78)

...At a Eucharist [and here is where I’m likely to be accused of sacramental heresy] the priest, by ritual and drama, makes present the memory of something both shocking and wonderful that happened many years ago. The truth of this act is hard to fully comprehend [indeed there are possibly many truths] and the ritual enacted brings it to mind again. The most basic meaning is again Incarnation - we eat and drink bread and wine said to be the body and blood of God - because we are in some strange way the body and blood of God ourselves (humans filled with deity). Thus again it makes true what already is. The more I think about it the more the whole Christian story is about making true what already is. (78-79)

This is a realist and world affirming position, and not quite mine. But I want to address an alternative, say for someone who focuses on ritual and is keen to be within the Church of England (and I am not of this view I'm about to describe).

This alternative is a Celtic-rejecting, Benedictine using, ritual-discipline based Christianity that is indeed Churchianity, and exists as a kind of Radical Orthodoxy or postmodernism of Christian stories and of saints through the year. I suppose a question I have about this is motivation and its inherent anti-liberalism whilst being on the surface liberal within. For me, and clearly for Mark Townsend, the liberal spirit is that of freedom where really it wants to go. I raise this alternative because I am something of a postmodernist myself, but I find the closed and conserving version (if otherwise 'liberalish') sterile. It is full of, what Mark Townsend would call, "bullshit" and that bullshit is all those endless saints about whom we know bugger all but continue to mention, as if it is good for us. Of course bullshit comes in all sorts of forms, and one might be ritualism too. But then again, in the world, we act, and we repeat, and we develop rituals as reflections on how we see things.

I am a little bit more of an interpreter first, the world 'out there' next than is Mark Townsend, I think. I give more to language, and language is symbol. But like Mark, and indeed Alistair Bate, you do have to spread your wings a bit. We live in this wider world.

Another reflection is that of enchantment. As a sociologist I know from Max Weber all about disenchantment in this world of bureaucracy and rationality. Indeed the Unitarian tradition of rationality was joined by Romanticism in the Anglo-American tradition. This leads to the insights of the Unitarian Pagans or Pagan Unitarians, as well as a tiny bit more ritualistic understanding among liberal Christians. Certainly art and the image, movement and music, in religion must be more important.

So the book is one person's story, and then many others that relate to his own. He doesn't know his future, but the connections all the way back suggest an unfolding tale to go roughly as it has gone.

I doubt he can squeeze back into the Church of England. If he can it will be after it has got over its increasing troubles. It needs to have its women ordained as bishops, it needs to shift out the traditionalist Anglo-Catholics and lose some of the worst Conservative Evangelicals. A number have built their boats or had a galleon provided. But even then it may not be welcoming to the distinctly radical of various colours. There will have to be some sort of networking of the marginalised - those whose Blue Raven transformations cannot relate ministry to the Church of England - but the liberal groups are not very good at getting together. They should.
Posted by Pluralist (Adrian Worsfold) at 07:23

This alternative is a Celtic-rejecting, Benedictine using, ritual-discipline based Christianity that is indeed Churchianity,

Is this the only alternative? And what do you mean by the words Celtic and Benedictine? Are they really opposites?