Some people are having problems interpreting the new Roman Catholic document ANGLICANORUM COETI BUS as it is called. This bus image may help. 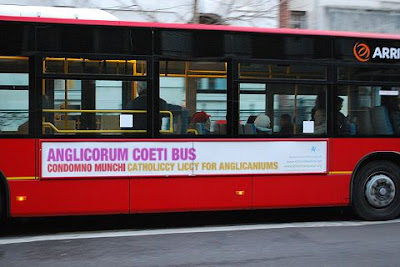 BENNY 16TH, formerly the Joseph Ratz, AKA Fingers the Crusher.

In recent times the Drunken Spirit has moved groups of Anglicans to pester the Clochmerle communion individually as well as corporately. The Apostolic Pee has responded favourably to stop the nuisance petitioning. Indeed, the successor of Pee the First, mandated by the Lard to guarantee the unity of the e-piss-copate and to preside over and safeguard the universal commotion of all the Meeting Places, could not fail to make available the means necessary to bring this vital desire to realisation.

Until now, all such Coetus Pissus without the Missus meeting places have been static and smelling of urine, and have been places of lurid sexual activity.

So the Holy Pee has decided that there should be one public toilet for every male, moving, on a coeti bus, and no longer divided into public and private, managers and workers, and other categories, but still reflecting sacred male hierarchy. So there should be One Bus from One Lard, run by alternatives to but not excluding the E-piss-copate, but with little places in the One Bus of Roomiruses, called Urinatiares, all gathered around the same plumbing and removing exhaust pipe. Condominium machines will be removed, of course, but Cathololiccy liccy is encouraged.

This should make everything clear for the future.
Posted by Pluralist (Adrian Worsfold) at 18:36

Adrian, do I recall correctly your saying in an earlier post that you had never attended a Catholic mass?

I ask because it seems to me that if you're going to be continually dumping on Catholics ("RC's" to you) that, as a social scientist, you should at least do a little field work. It's not like you first need a grant to fly to Bora Bora.

My field work was visiting the public loos in Hull and watching Clochmerle on television.

Rick, it's RC to me, too. RCs are not the only catholics. The leadership of the RCC puts itself on public display so frequently, that I don't see what attendance at a RCC mass has to do with discussing the activities of the leadership of the church.

Oh, and I attended RC masses for 60 years.