XXXXXX of the Political Research Associates (PRA) has emailed me about its latest culture wars report Globalizing the Culture Wars: U.S. Conservatives, African Churches, and Homophobia.

The report exposes the U.S. political right's promotion of an agenda in Africa that aims to criminalise homosexuality and of course this is very timely.

I tell my Unitarian friends that, whatever arguments go on there about the name and differences, this is small compared to the institutional shaking now going on in the Church of England and the broader Anglican Communion.

The business of the 'New Puritans' and the far theological right that involves these African countries is Western in origin and feeding. My analysis is this. The far right theologically are a minority, undermined by other evangelicals and especially the liberals and broad range of Anglo-Catholics. Their agenda is a lost cause within the Western Churches. Whether individualist (like many far right evangelicals) or Erastian (like much of The Church Society), the far right achieves little in its narrow expressions, as can be viewed by what the new Bishop of Peterborough wrote back in 1993.

So what they have done is set up, by

Leninist entryist methods and means, a small organisation that draws on the ballast of the more supernatural and magical religious views of Africa and broader afield, inventing in effect a worldwide Anglican Church with international oversight bishops, using the homosexual agenda and less so the female authority agenda to pursue their aims. The GAFCON/ FCA business has been an exercise in pre-arranging outcomes to establish a Primates Council to do some overseeing of international boundary crossing ministries and fellowships, which in North America has meant a form of separation whilst claiming to still be Anglican and to be within the Anglican Communion.

They have been helped by this by an Archbishop of Canterbury who seems to have escalated his own position and those bodies immediately around him. In this case the international Anglican fantasy has been Catholic, to produce something of a consistent international identity recognisable to Rome for ecumenical purposes, and all around the Covenant. In this case it has been less about boundary hopping than Church hopping, seeing bishops and dioceses and then Primates together before coming to the Archbishop of Canterbury. So the effort has been towards centralising using a Covenant, with the Primates Meeting, the Lambeth Conference and Anglican Consultative Council given forms of recognition in the Covenant beyond the informal place they have now. In so far as the actual

Churches remain the legally coherent decision making centres of Anglicanism, these international institutions will be new competitors for authority.

Evangelicals have jumped on the Covenant so far as it is convenient to assert anti-homosexual positions and means to isolate those pro-baptismal equality and promote those in breakaway.

It should not be surprising, therefore, that the Catholic-bureaucractic project for centralising and the arrogance of producing a Covenant, partly in response to pan-Anglican disagreements that would not matter in a continuation of a looser arrangement, has led to silence (excepting only the put-upon Canada - The Episcopal Church is being very strange) regarding the proposed destruction of human rights in Uganda. This was always going to be the case, that the bureaucratic Church project pursued doggedly by this worst Archbishop for centuries has profoundly unethical consequences, silencing utterly desperate ethical demands, and ruining his position for speaking about anything.

The funders of this right wing evangelical effort are clasping their hands with glee. They couldn't give a toss about Anglicanism or any other body. What they want is the means to influence and this is one such means. But their money, the far political right assisting the tactics of the far theological right, and the outcome of pursuing anti human activities and gaining silence from religious leaders, is exactly what they want. The loonies are running the asylum.

But there is an interesting parallel activity going on regarding all of this self-generated if externally funded crisis of Anglicanism - and it is that of Anglo-Catholicism, 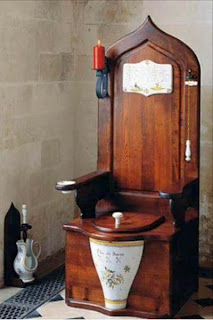 Rome and women in authority. Women joining men in authority involves the same stream of ethical activity as gay people (all genders) joining in with legitimate authority. And the Anglican Churches have been moving already in this direction, and the Church of England is doing so. The effect of this has been to undermine the actions of the schismatics of the far right evangelicals as well as traditionalist Anglo-Catholics.

The traditionalist Anglo-Catholics sort of hitched up with the far right evangelicals, as a sort of outside (while inside) organising to disturb and change the inside of Anglicanism - to take it over via such entryism effectively. Then, this Pope, more concerned about women's ministry than gay ministry, and its adoption in the key (mother) Anglican Church, dropped his bomb. Bye bye ecumenism. Needing a few extra clergy himself after his own image, he sent a big galleon across to pick up the right wing Anglo-Catholics. This not only makes a cleaner move towards women's full ministry more likely and emphasises further the division within the make up of

GAFCON/ FCA. The duped Africans have responded to the Pope's anti-women initiative by still rattling on about homosexuality.

As a group like Reform realises only too well, women's full inclusive ministry splits the evangelical constituency again and makes it weaker. In other words, the whole GACON/ FCA project has to be women exclusive if it is to be a successful entryist body. But this move in the Church of England actually makes an 'Anglican Church of Europe' under this Primates Council more not less likely - it forces the entryists to become more separate. In other words, the means by which traditionalist Anglo-Catholics leave the Church of England becomes the effective domino falling by which far right evangelicals will leave the Church of England. What they will do, of course, will move via processes of 'disobedience' and alternative oversight, but in the end the Church of the land has no need to become embroiled in the sort of property wars of the United States,

though my become embroiled in legal wars of authority and occupation. The far right evangelicals think they can survive alone and run their own financial affairs, and by such means they will either leave of their own free will or eventually be pushed out. When they are out, of course, their influence falls away, and the culture wars attempt will have failed at least here.

It doesn't do a lot for the fate of Ugandans, but it might lead to an ethical Church being recovered in some places so that there can be support to the job of governments in making their views and influence about a potential holocaust of death sentences and imprionments effective.

It's amazing isn't it. Someone like John Sentamu can jump out of aeroplanes and go on and on about Mugabe and not wearing his collar, but when it comes to the threat in Uganda (where he comes from) his mouth is zipped up. I have no time for these people. They remind me of reading history books about the majority German Protestant and Roman Catholic Churches under the Nazis. One wonders.

(It is World Toilet Day - sort of relevant, really)
Posted by Pluralist (Adrian Worsfold) at 19:14