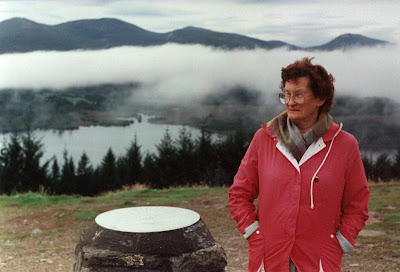 It is my mother's funeral today, and I am taking it. The complete script can be read here. The prayer, sermon and committal were written by me and are consistent with my mother's and my beliefs (the musical content was chosen by my sister). The gown and stole I wear was made by my mother.

It is hard to reflect on a funeral service, attended by relatively few and almost all of that location. I was taken by my very generous friends. We were in Clowne well before time, and this included going to the chapel of rest. I have to say, I think it was hideous as I looked carefully. My mother when alive her last moments, and indeed when she died, was, however thin and of loss, who she was. The preservation had the effect to me of undermining the work of the fire later, as if it had already been done. In one sense it made doing the service easier. I thought the crematorium chapel was an uninspiring place, and had a certain poverty about it. We didn't sing: the people doing the CDs interpreted 'All Things Bright and Beautiful' as a CD track from Brassed Off. I did wonder if that would happen. A good photograph had been printed out before arrival at my sister's, and I suggested we had that at the front, and so we did, but the coffin, now closed, was placed to the side, so it was not visible and the curtain closing had no ritual impact. However, coming to saying the committal was anticipated as difficult, and I sort of rose above it to do it and say the words (which had been difficult in preparation and rehearsal). When it was done, that was it, and I didn't 'greet' afterwards because, in the reality, I was not a minister but just facilitated. A side element was it being pleasing to meet my nephew after a very long time, who struck me as very kind. After the service we joined the party and their food for a short while before we three headed back to New Holland for myself and then Hull.

Posted by Pluralist (Adrian Worsfold) at 04:39

I was very sorry to hear of your mother's passing and I send you much sympathy.

I am very moved by the funeral service you have written for this day. Your mother sounds to have been a very individual and special lady, and will obviously be much missed.

It was my partner's first Anniversary yesterday, and although he did not suffer from dementia, the gradual and long breakdown of the physical body is quite difficult to watch and dreadful to suffer. I am much comforted by your words and thank you for putting them here so that we may all learn from them.

My thoughts and prayers are with you as you bid farewell.

What a wonderful service, it must have been so hard for you to do it!
I'm glad you were able to.