Anyone who visits my website will see that I still keep material on it about Bonskeid House. It is over ten years since I last went there. Now it is a private residence, for rich pals to go shooting. As such it denies the public access to some fantastic wooded grounds on a hillside down to a fast flowing stream. The Pass of Killiecrankie nearby is where I had my first major back spasm, in that having come up a hillside I went up a further three steps and hit the floor in agony. I then had these for six years and have had none now for four years, although the odd warning shot gets felt.

I did some work while there, with trips and paid expenses. I took my mother each time. On one occasion the Rev. Professor Robert Barbour, who sold Bonskeid to the YMCA in 1951, was a link by which my mother and I took part in a Scottish version of Songs of Praise, swelling the numbers in a chapel high in the nearby hills. Hymns were sung several times I think for the future time of Advent (not sure) so that the camera had different angles on the same people.

I only mention this because recently, when I sit on the bog, I have been re-reading a book on the history of Scottish Christianity with its brief chapters including about the Great Disruption in 1843. There was a bust of Thomas Chalmers in the Bonskeid House library 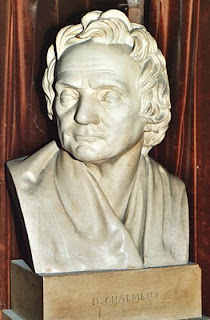 and he led a removal of ministers and what became a middle class Free Kirk. The Free Kirk eventually united with other previous seceders, including the United Presbyterian Church, but it also had a history of dividing. Although evangelical, it like other main Churches shifted its position to some extent so that a literal acceptance of the Westminster Confession was not required.

At the time towards the end of my visits a woman contacted me about the early socialist John Murdoch, an ancestor of hers. I went on to have a short relationship with her. He was in the area between 1821 and 1827, until he was nine, at which time Gaelic was at its margins in that mixing area, but collapsing after the clearances and depopulation. What was oppressive was the instruction of religion. He wrote:

The catechism was at that time, as it is now, one of the instruments of education in Scotland; and I remember being kept religiously locked up in one of the big rooms at Bonskeid House so that I could not stay away from learning it. There was some feeling of dislike for the book implanted within me by the confinement. I question if any good came of it.

As you go into the hills, you go across to eventually a route to Glen Coe, and so the Jacobite influence intensifies, and so Bonskeid would have been at the crossroads between the Jacobite old ways and Scottish modernisation, of which Murdoch and Chalmers were a part, in their own ways.

The Free Kirk was middle class because the landowners and working class (in as far as they were involved) remained with the Church of Scotland; the Free Kirk needed to expand rapidly and this involved middle class new money and personnel.

The Jacobite invasion of England as far as Preston, in an attempt to restore the line of James, led the English to push back the rebels and ethnically cleanse western Scotland (destruction of the clans and the removal of much crofting); as a result Gaelic culture retreated faster into the islands. The Episcopalians, setting up separately from 1695 and clearly in 1712 for those loyal to Anne, were further marginalised because of association, and became a fringe Church in Scotland, and those days when the Church of Scotland had both presbyteries and bishops in haphazard fashion were well and truly a memory. James before his departure was pro-bishops and pro-liturgy that smacked of popery to many Presbyterians, but it is worth noting that the Presbyterians supported the restoration of Charles II because Cromwell had allowed Baptists, Independents and other seceders to exist within Scotland and they broke the monopoly of the Church as it then was, muddled as it might have been regarding its systems of authority. Fully set up by 1808, the Episcopal Church became most distanced from the Presbyterians later in the nineteenth century when it breathed in the Oxford Movement winds (though all felt the effect of the Gothic revival) and the Presbyterians hardened their identity on the basis of being anti-bishops.

The Scottishness promoted today in tourist centres and seen at various highland games etc. was that of the Royal family - seen in dress such as kilts. It was a sanitised and approved form of Scottishness from the landed and the English imported class system that then had the Scottish landed grafted on to it by subservience. However, the lowland Scots of the Enlightenment had been pro-French in sentiment but not pro-Gaels, who were seen as backwoodsmen, and these Scots found plenty in the English for modernisation.

Radical Unitarians were pro-French and pro-American in revolutions.

As for the Unitarians, there was a Unitarianism among Campbellite and Millerite movements co-inciding with the Priestleyite and even earlier outlook: they were biblical literalists and unitarian in theology, but these did not form a Unitarian movement. Each of the four Unitarian churches in Scotland has a specific history, and there is also a Unitarian retreat centre on Orkney.

The Edinburgh church has seceding origins, in 1776. The strictest Covenanters, who had seceded from the Kirk because William and Mary wouldn't sign the Scottish Covenants, split into Calvinists and Universalists in 1749, and the latter from Berwickwhire descended on Edinburgh to form a congregation but took up the Unitarian name only when it became legal in 1813.

In 1833 in Aberdeen a small group of liberals invited the Rev. Archibald MacDonald of Greenock to conduct Unitarian services in the city. From this a congregation was established on Sunday 13th October, 1833 and a new building was ready and called a 'Christian Unitarian Church' on 9th August, 1840.

The Dundee church was founded in 1785. A self-educated and wealthy William Christie preached at Montrose and gave Arian type Unitarian views, considering that the Trinity was a papist heresy. He was encouraged by Joseph Priestley regarding the scriptures, and Thomas Christie, William's nephew, attended the first named Unitarian chapel by ex-Anglican Theophilus lindsey in 1776 (Arian by liturgy). Thomas Fyshe Palmer, who founded the Dundee congregation, wrote to William Christie at Montrose, stating about the Anglican Church:

I consider her liturgy corrupt and anti-christian, and her articles to be not only an injurious violation of the liberty wherewith God and Christ have made us free, but a jumble of absurdity.

Palmer would not subscribe to Anglican articles, stayed with Christie for two years at Montrose, and then founded his own congregation in Dundee in 1785. Dabbling in politics he was arrested for sedition and ended up going to Botany Bay.

Christie himself was anti-establishment, and regarded establishment as the cause of evil behaviour by the Church. He went to Glasgow in 1794 and across to America after Priestley. The Montrose church didn't survive; in the 1790s it had ten worshippers.

A unitarian preaching room was opened in Glasgow in 1787 by preacher and businessman 'Jemmy' Wardrop. After various leaders and preachers, the congregation conked out around 1795 after William Christie had emigrated to the United States. Then Calvinistic Baptists who had adopted Universalist and Unitarian views, expelled from the Baptist Communion, connected up with a Paisley Society having undergone a similar ejection. The Paisley group had arranged for assistance from the Unitarian Fund and in 1808 the Rev. James Lyons of Chester came to Scotland on a Missionary tour and a Unitarian Fund was established in Glasgow. Rev. Richard Wright came in 1809 when as many as 2000 who came to hear him had to be turned away at the door. A congregation formed at the Provan's Hall split, and it was the moved group at the Trades Hall in 1810 that formally set up a Unitarian Society in Glasgow, with the remainder at Provan's Hall people coming the Trades Hall to then all move together as one to the new Union Street chapel in 1812, a year before Unitarianism became legal.

The Scottish Unitarian Association comes from 1813 and a certain George Harris was involved in its founding and its secretary for a time. In 1816 he published A Statement of the Principles of Unitarian Christianity addressed to the Inhabitants of Greenock and Port Glasgow, and to the Friends of Free Inquiry throughout Scotland, by a Unitarian. A Unitarian chapel was opened in Port Glasgow him in January 1822 but he was in Bolton (where his controversial stance around 1824 led towards the York Lady Hewley case that might have stripped Unitarianism of its trust funds; the broader liberal Christians were later to turn on and supersede his denominationalist type of Unitarian). He to Glasgow and the 'front line' in 1825. In 1841 he moved on to Edinburgh to pump some life back into that congregation but four years on went to Newcastle-on-Tyne.

Just so you are aware, you reference links appear to be broken. Very interesting post though.

Even for those who think they understand the background of Christianity in these islands . There is always something usefull to be gleaned .