Grimshaw up in Haworth... was very keen that people should hear the message, so before the sermon he used to announce a Psalm, usually Psalm 119, and he would then leave the church and go around the village, allegedly with a whip, to make sure that people came to church to hear the message. So they worked their parishes.

Here then is a new strategy for Reform! Actually, this is quite an interesting booklet, coming from 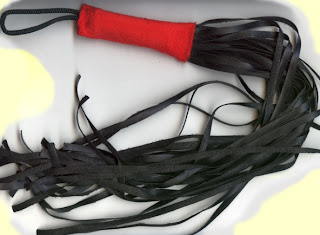 Jonathan Fletcher, as introduced by Rod Thomas of this pressure group, and discussed online. The quote above comes from that. This whole presentation is also highly biased, surprise surprise, and is Back To The Future: Reforming The Church of England - Learning From The Past.

It is arguing that the situation of the Church of England in the eighteenth century was worse than it is today, and yet there was an evangelical revival. The talk is a curious mixture of past and present, where past does not always justify the parallel with the present and some present day concerns get a throwaway remark - for example, the unconventional but not illegal activity of some of the evangelicals of the past equates to the Covenant for the Church of England, the thrown-together document that was pounced upon the Archbishop of Canterbury a few years ago.

Well history shows that not only did the evangelicals revive, but so did Catholics, but also so did the Broad Church. In fact the whole institution became more ideological throughout, and less a sort of moribund institution equated with the State. It was in the eighteenth century that the Reformation version of Arianism became influential (for example out of Exeter), that Cambridge grew as a centre for an identifiable liberal theology, that the Latitudinarians expanded, and although the Feathers Tavern petition against subscription to the Thirty Nine Articles failed, Reform members seem to forget that the aims of that petition pretty much came to fruition in a different era some centuries on. Then, into the nineteenth century, there is a movement from these to biblical criticism as coming in from Germany. That it became more ideological was part of the sociology of religion (sociology of knowledge) as the Enlightenment took some hold and the Church began its long adjustments towards the margins of intellectual thought - so it became more distinctive and less statist.

So there is the ideological position set out, as following on from a talk the previous year by David Holloway:

The Church of England, as we heard last year, is not halfway between Rome and Geneva; it is halfway between Luther and the Anabaptists, which brings you to Calvin - we stand for moderate Calvinism.

The group prefers bishops on the basis that they are better than a committee (is that it?), and they have a whole list of doctrinal touchstones, and yet Keele in 1967 had the evangelical compromisers as influential too. They don't want to compromise: sometimes one wonders whether they do want to be in the bigger Church than them, whether they can accept that they are but a small part of it.

So in the worse eighteenth century they have their heroes, like Grimshaw, who kept to the Church of England, who scattered about, did some things differently, and had their holiness (the story of him whipping people in at Haworth while the remnant wearied their way through Psalm 119 may be apocryphal).

The lessons from the past, then, are to stay evangelical:

When some of us were in our Christian Unions or helping on Pathfinder or CYFA camps we were called narrow, blinkered, obscurantist, fundamentalist and extreme. This is what we are still called, what we were called in the Church Times recently, and that suggests that we have not moved, and that is good.

I fear some of us have mellowed since then; the Archdeacon told me that he thought I had mellowed, which I took as an insult.

But this is a divided broad sympathy:

So I want to issue a plea to those who are not here, broadly speaking the Fulcrum constituency: you were once with us, and we love you, you are our brothers and sisters; will you not stay with us? As for ourselves, we must stay true to our theological convictions, our evangelical doctrine.

Unlike Fulcrum types, presumably. Reform types should also behave themselves and stay holy, and they should stay in the Church of England:

There are people going to Church of England churches who are clueless and lost and we must not desert them! Geographically and pastorally, it is significant that the Church of England has been able to maintain at least a physical presence in tough areas, because we are a connectional church, whereas the Methodists and other churches have had to close.

Clueless faithful? Searchers and seekers, rather, and often well capable of forming their own views. Also, I thought that Methodism was connexional, but there we are. There are, in any case, plenty of Anglican churches being allowed to drift to face an inevitable end. It's a kind of equivalent after-Beeching strategy of piecemeal activity, infrequent and irregular timetables of services, no appointments to man the churches and allowing confusion to reign on just about everything - but the people are often the most faithful whilst they have to put up with neglect as a form of management (bishops and committees).

Another lesson is to go to odd places, even if it means wearing robes, in order to revive them.

'Oh, I can't go there, I might have to wear robes.' Robes are totally unimportant. We must be prepared to wear them for the gospel's sake. Phillip Jensen (Dean of St Andrew's Cathedral, Sydney) says that if you have the opportunity of going to a church which has not had an evangelical tradition, then what you are to do is to take the services really well, you are to preach really well, and you are to go visiting around the parish. So we must not forsake the Church of England.

They should not just go to suburbs. They should not resist Urban Priority Areas or rural areas on the basis that these do not throw up evangelical leaders. There may have to be patience. Patience? Is patience a virtue?

Another lesson is to think outside of the box; Fresh Expressions gives them an opportunity.

Also a lesson is to maintain unity. For example, they should not push something like lay presidency at the Eucharist:

'Look, it was a matter of judgement. I do believe in it doctrinally, but my judgement is that this is not the right moment.' That opened things up for me. It meant that I disagreed with his judgement over the timing - I think that lay celebration is something we ought to go for - but judgement issues are areas beyond the Bible where we may disagree. We have got to be very careful that we do not fall out over those things.

There are things to get burnt for, however:

On the other hand, there should be humility when it comes to subjects like creationism, limited atonement and annihilationism. Charismatics are all right too, so long as they don't rely on experience.

The myopia here is that Reform is a tiny group with visions of greatness, impossible in a sectarian reaction now far further on from those days of eighteenth and nineteenth century adjustment. That's why so many want to go to suburbs - they are islands with a base that can be built up by incomers and make a financial noise. Nevertheless, what now gives Reform too much influence is the over attention paid to the Anglican Communion, which is allowing a bigger wind from parts of Africa to blow over what happens in a different cultural setting.

I believe in meeting people where they are, and in small steps, and encouragement, and to see some of the purposes found in Christianity promoted rather than all the dogma, which is just irrelevant to so many people's lives. Let's create settings where people can build themselves up with others, through the central ritual activity that expresses a unity between them. It may be gentle, it may be small steps too, but it respects intelligence and searching for what is important. Primarily a church should be a pastoral space where those bigger, overseeing issues are wondered about in a prayerful context. The Christian tradition offers a resource of support and building up, an ethical base (if it is only allowed to emerge) and a way to consider what is holy.

The Reform project is all about a list of beliefs and aggressive neo-Calvinism, all strategies and recoveries. It tramples over the other; my interest is in the other. Whips can stay in glass cases.
Posted by Pluralist (Adrian Worsfold) at 03:34