The letters for bishops doubtful about a commitment to the Covenant and Windsor Process, and thus to examine whether they should turn up at Lambeth, were going out "presently" well over a week ago now. It depends on the definition of presently. Perhaps that video talking about the Lambeth Conference was instead of the letters - though why should it be? BabyBlueOnline, ever hopeful, passes on the report that it is not. Perhaps one cannot properly single out some bishops and not others who have doubts about the Lambeth Conference agenda: there are surely more with doubts about the agenda than some consecrators of Bishop Gene Robinson (who, actually, might be positive about the Lambeth Conference agenda!). I made the joke that the letter could go to all bishops so that they all ought to examine their consciences regarding the agenda.

There is still time, of course, but the chances are now that the reaction to the premature announcement of the letters was such as to deter Lambeth Palace from sending out the real thing, assuming that Tom Wright was properly informed in the first place. 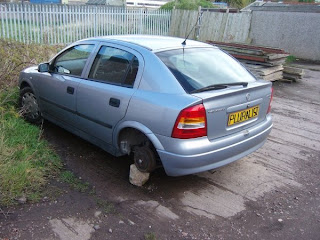 Meanwhile, just to reiterate, I have no connections with Lambeth Palace or have any particular insight, and have never even been near the place. I have never met or heard Bishop Tom Wright. I have never met or heard Archbishop Rowan Williams. I have been to Bishopthorpe (York) twice, and did meet Archbishop John Habgood there, and in a rural parish church I frequented then, but that was back in the broader minded 1980s. I'm just a poor, marginal, boundary-crossing worshipper up in a lost spot of northern Lincolnshire, where two weeks ago someone or some people nicked one wheel from my car and left that part on a concrete block.
Posted by Pluralist (Adrian Worsfold) at 17:17