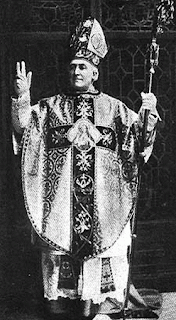 As pointed out here (100 years ago today) and here it is 100 years since Arnold Harris Ochterlony Mathew (1852-1919) was consecrated bishop (28 May 1908 - my blogging clock is 50 minutes fast) and subsequently came to the United Kingdom to form the Old Catholics here and whose main legacy became, by default, the Liberal Catholics (who broke away from him).

Many in Anglican circles may well have forgotten about this minor figure for Anglican history, but he had a relative importance around Anglo-Catholics and was regarded as something of a nuisance by the hierarchy, leading on to an antagonistic relationship between Anglicanism and a semi offical view of Episcopi Vagantes, as they get called.

It is a viewpoint I would reject, and regard as unwarranted. He was ecumenically minded, but his (never realised) potential was feared, particularly at a time of difficult memories around the rise of the Oxford Movement and an issue keenly felt about the Catholic legitimacy of Anglican orders.

There is more on Arnold Harris Mathew here and also I wrote about him and much more.

Here were some of his stages on the way. Interesting regarding today's Anglican controversy, he was always discovering homosexual activity and running away from it! Also not the pretty lousy encounters with the Archbishop of Canterbury, Randall Davidson.

Posted by Pluralist (Adrian Worsfold) at 00:42

Good heavens -- a more tangled journey even than that of Orestes Brownson -- but roughly contemporaneous -- maybe it was the times...

Brownson was around earlier, surely: your point stands though in that there was something about the turn of the twentieth century that set romanticism and Catholic ritual to come together briefly, the end of the Oxford movement escalator perhaps, and a difficulty of institutions at that time. All else is from this. AHM was a part of this, though also tried to be a standard Catholic, and could not fit in anywhere. From him the romanticism had a liberal turn, as it had already elsewhere.