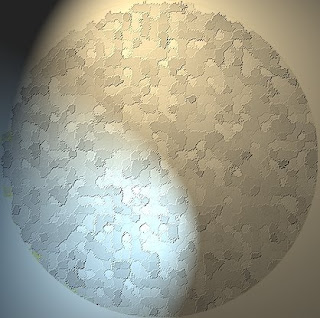 I speedily wrote a comment at Fulcrum that I have decided I want to alter and develop at more leisure. The context here is deliberately left out and thus there is no direct link - ha ha!

There is a large house where smooth-surface concrete floors were put in downstairs as a revolutionary, even prophetic, technique. The result was an unforeseen boomy quality of sound when people talked, as well as it feeling cold underfoot. The head of the household then decided to have a fitted carpet in each room (rather than rugs) because it made the occupants' feet less cold and the floor softer to walk on and, of course, with complete coverage, each carpet dramatically cut the echo. However, he left one room uncarpeted because he and his family liked to sing and entertain, and in this case the bare floor added to the sound quality they and musical instruments made whilst some rugs were actually hung from the walls. A diary writer, he made a note of why he had the carpets put down and why he left that one room without.

Many decades later the house is owned by a musician and a recording studio is built in the house, in the same room that did not have a carpet. It is stripped back to the concrete floor that is then treated. The room has some egg box shaped wall sections added to precisely moderate the sound quality. The musician finds a history of the house in the local archives and reads the reasoning that carpets were put down. The new occupant notesin his diary on his computer that the household head obviously foresaw that the qualities of a recording studio was the uncarpeted room's ultimate purpose, and in his journal writes at length about this reflection, the sound qualities of the recording studio and this room, and the general history of the house.

This journal is made available to the public, and the fans buy the book in quantities and marvel at the prophetic history of the house. The diary waits to go into the archives after the musician's own death when, probably, only enthusiasts and locals will want to study the archive.
Posted by Pluralist (Adrian Worsfold) at 21:15