In the Tradition of Francis David - and Not

It is not my intention now to draw attention to discuss Liberal Catholicism, other than on my website as a historical existence. I did have a brief enquiry with a group, but it is clear that I am out of sympathy with its esoteric and almost magical stance as to what happens at the Eucharist, and I am not persuaded in any rational sense about the laying on of hands down the ages (it is no more than an identifier of continuation: nothing specifically 'happens').

Furthermore the ethos of wearing elaborate dress and repetitive consecrations, after which the consecration lines are again rewritten, is not one I share. It is just not important, compared with the actual functioning of forms of ministry and faith with what one calls a congregation, however that congregation may be formed (even online). For me, the key focus is the congregation.

The other ethos element I reject is that which cannot see the difference between persons and ownership of a religious group as distinct from persons and the bureaucracy/ identity of a religious group. For example, when in Anglicanism we have disagreements between tendencies, we know the difference between arguing about the tendencies and about the people in the offices of those tendencies. There is a thin line here, but there is that difference between role and possession. The problem with Liberal Catholicism is that it is so small, and the organisations generated so precious to the founders, that the criticism of the body or part of the body becomes a personality clash, and people fall out. It is one reason why there is a high level of movement from group to group, and why some Episcopi Vagantes really are wandering around. So there is a need to tread carefully.

So I mention again a small group with lots of grand-sounding titles, but only for a specific drawing of attention to a claim of connection. I think this has to be raised, because it is somewhat misleading as regards a connection made between the Liberal Catholic Apostolic Church and Francis David.

On the newly changed website, a claim is made as thus:

The history of the Liberal Catholic Apostolic Church is in one sense the history of Christian liberalism throughout the ages, from the earliest pre-Constantinian times, through the Unitarianism advanced by Ferenc Dávid (c.1510-79), to the major liberal resurgence in nineteenth-century hermeneutics and the twentieth-century independent liberal churches.

Now any group can claim any connection it likes, but this connection to Francis David is erroneous at best. These are as chalk and cheese. As I understand it (and people can find out for themselves) the LCAC claims to be Catholic, Liberal and esoteric, and affirms over and again Apostolic Succession; its liberalism is derived from the elements built into the history of Liberal Catholicism at its birth and development, social inclusivity and Catholic universalism.

Well, all that is for them. However, Francis David heads a central European tradition of Unitarianism that is purely Protestant in character. It grew as part of the left wing of the Reformation, to do with an interpretation of the content of the Bible, and made possible under the shadow of Turkish influence coming further over Europe, and was connected in contact and debate with the Socinians headed by Faustus Socinus moving from Italy into Poland.

Whereas the LCAC has features of elaborate dress, consecrations and titles, and the mysticism of the Mass, the whole ethnic Hungarian tradition of Unitarianism emphasises simplicity and rationality: it differs from Anglo-American Unitarianism in that it took on a Catechism for original reasons of expediency when political conditions became rough, that prevented further evolution of belief as a deal by which it could exist (at the time when the Polish Socinians and later the Hungarian Unitarians were destroyed). This Unitarian difference is maintained even today. The Unitarians in Transylvania and Hungary have bishops: these two are simply superintendants. They reject apostolic succession. Architecture has remained simple and even severe (whereas English Unitarianism had a partial gothic influence that was a reflection of rising social status).

This image comes from one of Knut Heidelberg's blogs and shows the Bela Bartok Church in Budapest: 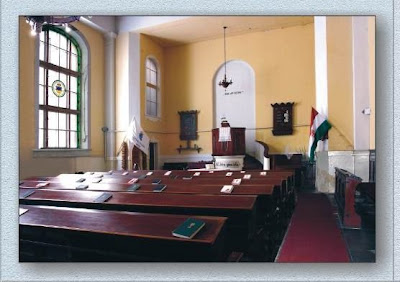 Some Liberal Catholicism involves, its seems, fast changing identities according to what additional groups get attached to particular persons. So a previous group in the line of this LCAC includes the Liberal Rite, and its various name-changing origins included the English Liberal Free Church. Now it was inspired in part by Joseph Morgan Lloyd Thomas. He was an anti-denominationalist Unitarian minister and produced, with some ecumenical friends, what can be called Free Catholicism. It broke up rather quickly as its sacramentalism gathered pace. The Congregationalist W. E. Orchard eventually went into Roman Catholicism but J. M. Lloyd Thomas, who kept his Birmingham church out of the new General Assembly, went back to Wales and concerned himself with education. Lloyd Thomas produced A Free Church Book of Common Prayer (1929) that included the Nicene Creed, specifically rejected by Unitarians. When I have talked about J. M. Lloyd Thomas to Unitarians, they seem to regard him as something of an aberration, which is a shame, and it is a sidelined part of Unitarian history. There is much to discover about the place of symbolism as a support in worship particularly in postmodern times. Anyhow, when this English Liberal Free Church ceased, Rev. Stephen Callander left and returned to semi-independent Unitarian ministry (there is a tendency that makes up the Unitarian Christian Association, which stretches from Unitarianism outwards into Protestantism - including links into Northern Ireland).

There is a different connection between Unitarianism and an independent strand of Liberal Catholicism: that started by the Oxford based Ulric Vernon Herford. His attempted monastic church movement went nowhere particularly, but his acquiring bishop's orders (for a dream of ecumenical contact between East and West) means that there are all kinds of movements, orthodox (both senses) Christian and otherwise, that trace back through him. That uses the belief in apostolic succession, and has nothing to do with Herford's maintained Unitarian beliefs as such. Incidentally, he ordained W. E. Orchard as a priest.

Allowing for that connection of inspiration, nevertheless a claimed connection of Liberal Catholicism of any kind or whatever sense to Francis David is rather stretching matters too far. Groups will claim all kinds of connections, of course, as it suits their purposes and claims, but I respectfully suggest that in this case there are none, and that some violence is being done here to the influence and traditions of Francis David.

Still, I'm no religious policeman in this matter, and I do no more that offer a view and draw attention to this claimed connection of sorts. Whilst I have made contact with an expert in the tradition, he or another religious historian might come along with a corrective, but I cannot see any.
Posted by Pluralist (Adrian Worsfold) at 19:19