So Anglican bishops are calling the government immoral and corrupt in its policies. The Daily Telegraph has this:

The Bishop of Manchester accused Labour of being "beguiled by money" and "morally corrupt".

They were joined by the bishops of Winchester and Carlisle who claimed ministers had squandered their opportunity to transform society and run out of steam.

The bishops said Labour sacrificed principled politics and long-term solutions for policies designed to win votes. One described the Government as "tired" and another said its policies were "scandalous".

This follows the strange reporting in the same newspaper of Rowan Williams's comments, with his vague entry into economics and theology and criticism of pursuing principles that lead some people now into unemployment.

Most bishops are similar in their criticism but one is rather different.

The Bishop of Durham's criticism

is Labour policies not meeting its promises leading to the rich getting richer, the poor getting poorer and hopelessness: the bailing out now of big institutions but not ordinary people who are losing their jobs and seeing their savings diminished.

The Rt Rev Nigel McCulloch, the Bishop of Manchester, focusses from an economics and moral angle on the government encouraging further private debt. The government encourages greed and a love of money that the Bible calls the root of all evil. The government has suggested a lifestyle of always getting what you want (that has collapsed). Labour has been Thatcherism that was condemned back in the 1985 report, Faith in the City. The poor feel that they have been betrayed and, arriving at Durham's political view, says the gap between rich and poor just gets larger.

The Rt Rev Stephen Lowe, the Bishop of Hulme, gives a similar economic based criticism, that the Government isn't telling people already deep in debt to stop, but instead is putting pressure on the public to carry on spending in order to revive the economy. He arrives at the politics that this is cynically timed for the next general election, taking political credit whilst gambling with livelihoods.

Bishop Scott-Joynt, the Bishop of Winchester, thinks tax redistribution has failed, and that getting itself re-elected has affected policy rather than help directly 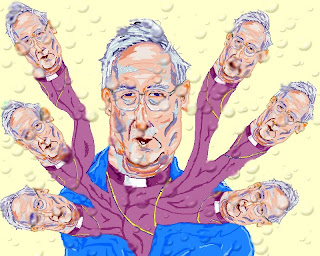 Not surprisingly, given his past record, Graham Dow, the Bishop of Carlisle, gives a different focus. He again gives his view about the breakdown of his understanding of the family (agreeing with the Conservative Party) and thinks Labour is tired. He thinks a failure to back his model of the family is because Labour needs votes from other forms of family.

The question that arises from this is why they didn't criticise about debt when it was growing and be a little prophetic that this would lead to disaster? It is easy to come in after the event, and during the aftermath.

Perhaps they might address the policy now of deliberately paying an unsustaining Jobseekers' Allowance that is meant to force people into work, when the rate of unemployment is soaring, and will force poverty. The idea that looking for work leads to a job defies sense: looking for jobs makes not one extra job. Why is it also, when this system delivers levels of unemployment based on technical efficiency and comparative advantage, the only value given to people from the government is that of doing work? Work Makes You Free, says Gordon Brown and his Protestant Work Ethic.

The government is going to respond to unemployment by extending workfare, which means the unemployed working at no expense to employers for their dole. When the Conservatives did this in the 1980s, people worked half time for union rates at community projects in places like art galleries and museums. Now it is for nothing but a small addition (or has been so far: it could soon be for nothing) with any employer who is interested. Gaining skills and work experience is valuable, though people are often given the wrong training (the stress being on very basic literacy, numeracy and ICT), and insurance concerns prevents some actual training, but it is the use of compulsion against those who lose out with the economy we have that is objectionable.

When these people do workfare they are not counted as unemployed; when the come off it and start signing again they are no longer counted as long term unemployed. In other words, the government fiddles the figures.

These religious personalities should look a bit deeper and express their economic and positions earlier. Where is the criticism of the inappropriate workfare proposals, for example?
Posted by Pluralist (Adrian Worsfold) at 17:54