A Meaning of Christmas

So I went to the Midnight Mass, among some friends, and as ever a great number came in who the friends sometimes know 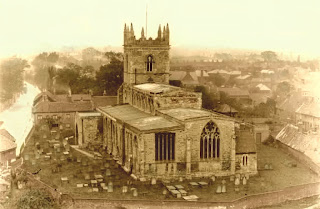 but are not seen in the place afterwards until the next year. The annual worshippers sing the carols, they hear the sermon again, and many have a once a year communion. May be it is odd that I do not now take communion (at least not for now, while I puzzle about things).

Why is it that in a church the two per cent regular attenders swell to five or more per cent of the population? There are different annual people in other churches too, so that 'the day' is made special by the effort of attendance at a church either the night before or during, and this religious observance adds to all the other rituals of 'the day'.

What they most definitely are not celebrating, nor are they called to celebrate, is a baby who was born and destined to be killed in order to save people. There was no compulsion in the mythic-history of the drama, and nothing was laid out in advance. To say that this is the only interpretation is sheer arrogance.

At this midnight service, and at other times, people are given the Christian myth, and given the breadth of it, and given an insight, even permission, to search. However, people are resilient, and, just as with rites of passage, they put their own interpretations on to their observances.

There is more similarity than difference between popular observant Christianity and Hinduism than some may think, and I would suggest that Christ functions as a kind of Krishna.

There is Baby Krishna, and there is a naughty teenager Krishna 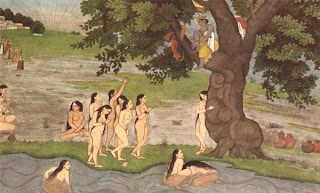 (he steals the clothes of the local bathing girls) and there is the adult, principled Krishna in dialogue with Arjuna, and the adult says, "Do it." At every stage Krishna is in contact with the heavens and the ultimate, because he manifests the ultimate.

A clue to this was provided by one of my pub friends on Tuesday this week, who is a Methodist and is raising her nearly three year old child with a consciousness of Christianity. She has said to him, and I quote accurately, "It is Jees... it is Baby Jesus's birthday." 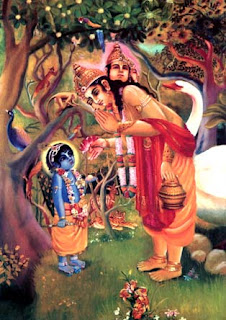 and just like Krishna at one stage, what is being celebrated here is the divinity of the Universal Baby.

Christians may examine Luke's lowly account of a birth hardly noticed after an unhistorical walk to Bethlehem, and compare and contrast Matthew's grander fiction including the visit of apparent Zoroastrians (or whoever) from beyond looking at the night sky. They might then add John's first born of creation account, afterwards. But what the visitors do is combine them all together, and produce the Universal Baby, a Baby that is divine and a baby that tells us something about us.

The story of the birth of Baby Jesus is the story that affirms our own having sex and reproducing personalities who continue us, humankind. This baby is a fully formed baby, like Krishna was a fully formed baby (who yet as a child opened his mouth filled with mud and the whole universe was seen).

Now of course Jesus was a real person, a teaching, preaching and healing itinerant rabbi, but the birth narratives are, by any reasonable examination, constructions of the early Church using existing scriptures that create important messages about the coming of the Messiah, the central person who would soon do the work of God and bring in a transformed reality, a liberated reality. But the myth of the birth, conflated and told, works at this different and ever repeating level.

In other words, a linear myth, drawn from Judaism and time that began and will end, becomes a circular or spiral myth of the ever repeating essence of humankind, the value of humankind

and the place of us in what is important about us. More than this, this myth of humankind draws in the animals as company, and is virtually held in the outdoors.

And of course, it is but a small extension to see not just hope in the small child that is everyone and draws in the creatures, but life in the greenery still around us and life in the days that now get longer and will prod the new growth of the ever coming seasons.

With such a thought, I wish all the people who come by this sometimes cynical, sometimes stupid, sometimes thinking-through, blog, a Very Happy Christmas.
Posted by Pluralist (Adrian Worsfold) at 02:53

A very happy Christmas to you, Adrian. Thank you for sharing your quizzical thoughts, knowledge and insights here. They are a great gift to many people.

Blessings to you and your loved ones,

"However, people are resilient, and, just as with rites of passage, they put their own interpretations on to their observances"

And isn't that most encouraging when so much of Christendom tries to tell us exactly what to think?

Thank you.
And a happy Christmas to you. And many blessings in the new year.

And I hope you start eating bread from the altar until it comes out your ears!

I don't think those discs come out of ears. I think they dissolve, vanish, something like that. Perhaps they fizzle and rise up after a while, so that no crumbs are ever left.

Yes the resilience of the population is one thing we can rely upon.

Robert Beckford on Channel 4 was breaking a few obvious ones open, though when James Tabor says, "I think we can be sure," I'm saying I don't think we can.

The sad thing is that the only way the Church of England seem to be able to teach the faith is as if it's all literally true - the idea that there might be such a thing as religious truth, as distinct from literal, historical truth, seems to be something which escapes the likes of most bishops.

Perhaps they misunderstand the concept of performance related pay.