Probably my latest offering to Episcopal Café will appear after Advent and even Christmas. It makes parallels between economic exchange and ritual gift-exchange, and thus develops parallels between financial trust and religious trust/ faith, and how even in Churches such trust could undergo a chaotic collapse. I'll leave it as it is, for later appearance.

For centuries civilisation has been confused about money. They have taken its value to be in the medium. Even the ten pound note promises to pay on demand the sum of Ten Pounds. That meant gold, but now you'd get another note. Essentially it is the promise, and that promise is trust. Money value is really the value of goods and services. What money does is effect a time-shift, through saving and borrowing, that barter cannot achieve. When States monopolised money they used to undermine trust in it by clipping and by producing more, and that lack of trust came out as inflation. The state though facilitated larger scale handling of money, so that risk became generalised over larger amounts saved and lent. That risk allows leverage, that for the most part only a small deposit is needed for a lot more lending, and this is fractional banking, but such leverage also relies on trust. Loss of trust equals a run on the money. To get around lack of customer deposits, banks have borrowed from each other, thus with more leverage money has expanded. However, when a bank fails, there is a house of cards effect.

The more integrated and faster moving a system, the more chaotic it becomes. All that has gone wrong with our system has been intensified by computerisation and producing one world economic system.

I taught chaos recently in a church Wild West event where I managed the roulette and craps. 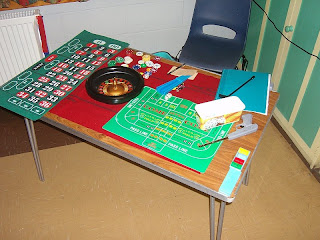 I told a girl to lay a single chip after she had won on a half to half bet (though less than 50% chance because of the zeros) such as red, black, even, odd. When she lost, she should double the next gamble on that bet. Having won but lost many chips so far, this proved to be a nice earner. Her pile got bigger and bigger. However, there was a miscalculation here: that each spin of the random number generating wheel has no memory, and it only took a string of blacks for her red gamble to wipe out her pile as she doubled and doubled. The lesson was, don't gamble. Of course, in our banking world just crashed, they used to keep borrowing to get a pay out.

Once upon a time governments issued bonds (from mid 1700s), to be paid back later or never, but paying a rate of interest. Issuing bonds means keeping taxes lower. Then corporations produced bonds and we have even seen bonds for mortgages, called Collatoralised Debt Obligations. Agencies marked them too highly, and sliced and diced mortgages within a bond paid an interest rate. When the mortgages failed, bonds themselves could not pay their rate of interest, and their price fell, but the unpaid debt shot through the system - the bonds still existed but were worthless.

Share markets are secondary markets based on future profit expectations. The expectations come not just from earnings on shares (the dividend) but rising prices. When money is cheap, and interest rates have fallen, it tends to transfer itself into the future expectations of share prices. Here's the problem: the 1970s inflation may have gone but the asset prices of shares (and more) were forever rising, and they started to produce a bubble waiting burst.

Property too was asset price inflationary, and only the inflation was paying for the bad mortgages wrapped up in the bonds. Too many people without assets of their own for deposit were getting mortgages. The asset value is essential to the lender, not the borrower (despite negative equity) because the lender cannot realise back the amount lent towards the borrower making the asset purchase. With an overstretched mortgage market, the asset values fell, and the lenders were caught. The assets are sold, the money is not realised, the borrower cannot repay the missing amount (nothing there) never mind the interest rate, and so there is a financial loss.

Most insurance works because it spreads risk of bell-curve events and passes this on to individuals. Sometimes we can see that our own risk management is better than deals available: for example the rubbishy extended warranties that mean paying more than the bill for occasional repairs to an item or, indeed, its replacement. Some events, though, can be so catastrophic to an individual, that the insurance is necessary because the gamble is too great. Now the problem in the economy is that systems have developed to insure against an economic downturn. The problem is an economy is a chaotic system and severe recession has no bell-curve feature of predictability: when the economy collapses insurance cannot cope. The derivatives that built up against downturn have themselves become victims of the downturn.

All of this has been compounded by China having a savings glut and the United States especially having a huge debt but necessary for China to sell. China has been lending to the US in particular and the West in general so that the US can consume. That lending, being relatively cheap, has found its way into asset prices of property and shares and bonds. Credit cards have been bulging with nothing: UK households were far more leveraged than could be good for any long term view. As each of these failed, so has money that expanded shrunk back.

Also we have cheats and bad practices, such as Mr Madoff who made off with over-encouraging pyramid paying deposits.

All these have led to a huge crash in money and trust that is at the heart of money, and it is why banks are not lending: they cannot. So public debt is now spiralling to replace the money supply lost in the expansion of lending and the liabilities that never came from assets. Yet there has been a shift in the equilibrium from what would have been the case a year ago had lending been so close to 0 per cent.

All this is evident of a chaotic system, that once the crash happens, there is little that can be done about it. My view is that what is needed is not cheap lending, or tax cuts (except for the lowest paid, and benefit increases) but project spending: spending on housing stock for rent, roads, rail, fuel cell cars, Internet and the likes that employ and that lead to real added-value in the encouragement of spending for other added-value goods and services. The Archbishop of Canterbury would be right to criticise government for returning to the drug if public debt replaces private debt only to continue to consume; it's not about fairy dust or, instead, tangible thingies being made, but adding value in what you do, and investment is further expanding the capacity to add value in the future. The benefit of spending on housing is that it would reduce the potential for its asset price inflation in a recovering economy. The shape of the curves has altered now away from the monetarist stance towards the Keynesian, and the monetarist view (of a 'natural' rate of unemployment built on technical efficiency and trading competitiveness) will only come in once activity is restored to a higher equilibrium.
Posted by Pluralist (Adrian Worsfold) at 19:14

I don't know. I haven't done it. There are others too. Is there an interventionist God?

Well Adrian,
Perhaps it goes even further than what you have thusfar explained. In the Turning Point, a book by David Korten, money - cash - has subverted the economy. Because barter kept things on an equal footing it balanced he economy. The advent of money has tipped the balance to the point that someone can overpay for some good or service - in essence out bid and drive the price artificially "out of sight". This has created a faux economy that has essentially killed the middle classes.
This is a very BRIEF synopsis and probably a poor one but there is much here to be discussed.

Sustained inflation via velocity of money or supply allows for price inflation of goods/ services /asset prices, however money itself does have a time flexibility through borrowing and lending that allows for investment.

A barter economy simply is too rigid regarding investment, nor does barter take away the marginal indifference by which some hope to make a surplus on a deal.