So what am I denying myself? It's more basic than atonement theory or anything else. It's about spirituality and the consistency of appearance and an inner state in what is going on.

For years I attended churches and not had communion services.

My view of it is not as God's self offering, but (this may seem similar) exists as a form of spiritual gift that we construct. The idea runs that everything between us is an exchange, usually to do with a psychological view of utility and its margin (basic economics), but we also find that exchange is something that brings people together. It's true in small societies, it's so in binding Europe together as an economic market and then a political union. But there is also the added anthropology of the spiritual gift, which does this more, and is thus a one-up gift-exchange. This is where someone or some group goes out of its way to make a material sacrifice (going out of its way is part of it) to receive a potential spiritual gift. That gift is usually contained in some sort of otherwise fairly useless token. The effect is a perspective on life and further binding of the group and a going out in a condition of refreshment. 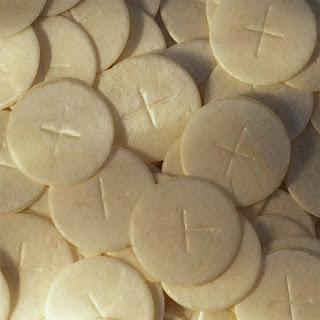 I think that the Eucharist fits into this well, and I view it this way around. The spiritual gift is somewhat ineffable, and it may come with impact or with little effect.

The peace, where one makes hand connecting or gesture with some others, knowing that there is a pattern that connects some to all, has a similar function, so this will have to do for me - while I consider things through.

Roughly speaking, the whole litugy is attitudinal, but it is just a drama and process that contains what it contains in these elements and it is a kind of reflective discipline.

I'd be happy to operate at this level, but without being any kind of literalist, there are realist expectations around what you do in liturgy, and I don't meet them; there is an expected consistency of outer appearance and inner stance that was not being met by me.

The problem is further that membership and consistent acceptance is defined as being at the communion rail.

If there is another view for participation, then I'll change back.

One of the interesting aspects of this 'collapse' is that it has not been via any competition with another group. All other enquiries and interests have been closed. Such a condition of change like this is unusual for me, because in the past I've been to two or more places at once. Even Unitarian College was the ecumenical one, to mix with others (and they were fine, it was the Unitarians with whom I had all the problems). It is just that my present approach to faith hasn't seemingly maintained itself.
Posted by Pluralist (Adrian Worsfold) at 05:35

“It is just that my present approach to faith hasn't seemingly maintained itself.”

What “faith”?
Put bluntly, you have spent your time trying harder and harder to analyse the components of faith with logical thinking, rejecting any possibility of a core truth that cannot be verified through scientific enquiry.

Of course, on those terms alone religion cannot survive and nothing ultimately makes any kind of sense.

That is not self denial, but an insistence that only that which the self can comprehend within the framework it has set has validity. It’s almost the contrary of self denial: an elevation of self to being the arbiter of what is truth and what isn’t.

And if there’s any chance that the truth of Christianity can only be met in the inexplicable numinous, then it’s the most rigid barrier against “faith” anyone could built up.

Faith is not the same as belief. I'm quite happy to say that there is much that is unknown and numinous and foggy, and cannot be penetrated by reason.

But when it comes to specific, logical statements that require assent, then there is the difficulty.

Statements such as perfection and God in the womb are statements that should be open to verifiability of one kind or another. Now either they are a kind of illusory aspiration, and let's be clear about that, or they are unverifiable for actual concrete sense making and not worth the mention, and certainly not the foundation of an argument about real issues.

I'd agree with you there!
But I had taken your previous comments that there is no "supranatural" to go beyond the rejection of a literal belief in the virgin birth or the resurrection. Apologies if I misunderstood you.

I wonder whether you might not be better off amongst the Orthodox Churches of the East?

"Augustine did not have patience with the teaching that the Angel of the Lord, the fire, the glory, the cloud, and the Pentecostal tongues of fire, were verbal symbols of the uncreated realities immediately communicated with by the prophets and apostles, since for him this would mean that all this language pointed to a vision of the divine substance. For the bishop of Hippo this vision is identical to the whole of what is uncreated, and could be seen only by a Neoplatonic type ecstasy of the soul, out of the body, within the sphere of timeless and motionless eternity, transcending all discursive reasoning. Since this is not what he found in the Bible, the visions therein described are not verbal symbols of real visions of God, but of creatures symbolizing eternal realities. The created verbal symbols of the Bible became created objective symbols. In other words, words which symbolized uncreated energies like fire, etc., became objectively real created fires, clouds, tongues, etc.

"This failure of Augustine to distinguish between the divine essence and its natural energies (of which some are communicated to the friends of God) led to a very peculiar reading of the Bible, wherein creatures or symbols come into existence in order to convey a divine message, and then pass out of existence. Thus, the Bible becomes full of unbelievable miracles and a text dictated by God.

"Besides this, the biblical concept of heaven and hell also becomes distorted, since the eternal fires of hell and the outer darkness become creatures also, whereas they are the uncreated glory of God as seen by those who refuse to love. Thus, one ends up with the three-story universe problem, with God in a place, etc., necessitating a demythologizing of the Bible in order to salvage whatever one can of a quaint Christian tradition for modern man. However, it is not the Bible itself which needs demythologizing, but the Augustinian Franco-Latin tradition and the caricature which it passed off in the West as 'Greek' Patristic theology."

It might also be worth mentioning that the Orthodox do not hold the doctrine of Penal Substitutionary Atonement.

With God-in-the-womb, the major question for me would be, "Did God become incarnate?" The details of the how of the action are less important. The Babe in the manger is a lovely story that expresses the truth of the incarnation - for me.

I try to have an Eastern Orthodox attitude as a means of handling Anglican liturgy! Thanks for those comments.

The problem is my answer "no" to the question if God became incarnate in one person, except as a myth going on to some ethical considerations.

I'm very careful before I use terms like hypocrite. I can usually tell when someone is being creative, but not always, and sometimes a long way around regarding handling belief is all that is available.

We inherit ancient forms of faith constructions, and we do not have to mean them in a modernist way. However, the simple question I asked myself was about the promises clergy and lay readers etc. make, and it was from that (not a change in belief) that I said less in the liturgy and then decided I needed more consistency.

Someone has said, 'When you get hungry, go to the communion rail', and this is good advice. I'm not hungry in the sense he means it.