Death to Life and Religious Myth

Some programmes are the finest we can watch, and one must be After Life: The Strange Science of Decay. For anyone interested in themes of simplicity into complexity and in themes of resurrecting, this is a must. It's up there with Armand Marie Leroi's What Darwin Didn't Know, the programme that looked at how two lakes independently produced the same number of interacting fish species and how by genetics that we now know that the eye evolved, stage by stage, just once.

The programme on decay was an experiment (with some themes off) of a best sealed room in Edinburgh Zoo where the temperature is high and animal and vegetable food is left. 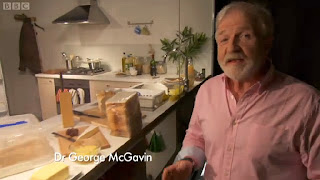 Some is in packs and some in the open. There is the contents of a typical family barbeque. A few flies are let in. There is also a big of composting going on. People can go around and look in, and Dr George McGavin makes his visits with other experts and asks the public to sniff things and even retrieve a £5 note from lots of maggots.

The main agents of decay are mould, bacteria and maggots during the room's 80 days. The three agents compete, and the flies produce maggots and then there's an explosion in fly numbers, must of which get drunk on wine and rotted vegetables.

Two aspects I found particularly interesting, and one was simplicity. Fungus broke down living matter, but then trees developed and for 50 million years stayed ahead of fungus and locked in carbon to make an oxygen rich earth that made for larger insects than we see now. Indeed the earth developed life. Eventually fungus evolved to get at the wood, and now turns dead trees white as it does its decaying job.

But a slime mould is a single cell body and can be huge. It is now shown to demonstrate pattern behaviour (like lots of birds forming efficient patterns in the sky: they just do). 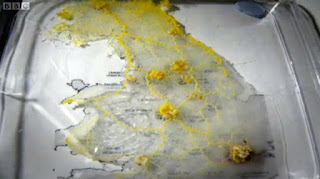 The mould spreads, finds food, cuts back leaving channels, and does so with back ups. The single cell must get its food, not cost too much and tackles damage. Create a map of 'centres of population' and a slime mould will produce the most efficient transport system. The efficiently planned one around Tokyo is superseded by the slime mould. In the same way, slime mould can do motorway planning in Britain, which can only be an improvement.

Like the maths of fractals, we have simplicities that appear to contain intelligence because simple rules create patterns. That's how the fractal works - an iterated virtual number equation from which beauty comes.

These are what I call signals of transcendence.

Then we have the business of decay. The atoms of nitrogen get moved from the decayed matter into growing matter. The forces of decay break things down, and clear away the mess, but also create the constituents that form new life.

The religions of the far east reflect this in their rebirth myths and that of circular time. For the more linear time approaches, the Iranian belief in resurrection imported into some Judaism and into Christianity is about death becoming life restored (and made full). So religions are reflections upon wider natural processes and also ethical behaviours for us more self-conscious ones. Yes, there are particular myths and old stories that relate to wider universal themes.

But an interesting point to add here (as regards the previous blog entry). If there was some tomb for a body that some claim was uniquely so far restored and transformed into a spiritual body, then when death occured not only would the brain have died and died pretty much immediately but the maggots would have got to work at an instance. More likely, as a historical point, the bodies of the executed were dumped by the Romans into lime pits so to precisely speed the rotting and gas bloating that would take place more openly and obviously - and the lime pit also goes for the bones.

The reason for making these connections is to try to plug religion back into the natural world and to give religion some life again itself. It's not that the stories of religion no longer work, but that in secularisation they are being shortcutted - we may as well go direct to the science and these narratives. Yet there is a lot still in Shiva as a God of destruction and recreation, for example, as there is in moving from death to life. My objection is simply in the particularity, where much of religion (and Christianity I know best) doesn't work on its own terms, by its own claims. I'm not a person to start praising Jesus or the work of the Holy Spirit when these are myths for what are ordinary processes that fascinate and are themselves incredible: particularly the maths and science of patterns and the way systems interact in the processes of change and renewal.

Note: all the images are from the BBC online broadcast and are here as illustrative.
Posted by Pluralist (Adrian Worsfold) at 04:09

It's wonderful to read such commonsense on here. I agree - when you're dead, you're dead - no amount of theological woo-woo, resurrection myth or wishful thinking can change that. Let's just live in the here and now and love each other as best we can.

Fair enough, but then, one might ask, what's the point of all this chit-chat about theology if the whole thing is 'woo-woo'? Why devote your life to analysing what you believe to be nonsense? Who cares?

I'm not trying to be rude. I'm just wondering if, beyond being a minority academic interest, attempts to squeeze Shiva (for example) into other, less mythical boxes do anyone any good in the real world? Is there much of a market for this sort of thing? It's well hidden, if so.

Your "Fair enough" is fair enough!

I'm a life long atheist who thinks theology is a waste of time - I devote only an occasional few minutes reading blogs such as this, so don't devote my life to it. I had no interest in any of it until 3 years ago when I became the partner of a gay man who was a clergyman in the CofE and I felt I should find out something about what he was involved in.

Since then I've have been appalled by pretty much everything I have found out about the church and Christianity and am delighted I have nothing to do with it - other than being a citizen of a country that has umpteen bishops sitting in the legislature as of right and who are trying their best to prevent me from marrying my partner.

Ah, so it's a question more for Adrian than you, then.

As for bishops, they can't stop you getting married, can they? You can't marry in their churches, but that's another matter.

If all they offer is 'woo-woo', maybe it's not all that important that you have the CofE's blessing!

You are doubtless aware that it is not possible for two people of the same gender to marry in the UK. We want a civil marriage and can't have one until the law changes. The Bishops in the House of Lords will doubtless do their best to hamper and delay the relevent legislation. Neither of us could care less what the Diocesan Bishop thinks and no he won't be able to stop us when it becomes legal for us to marry. Also, who says I criticise my partner's faith? - we have different views and I respect greatly the work he does as a hospital chaplain. He no longer works for the CofE as he could not get a job after he came out as gay.

There seems to be a contradiction between saying that you don't criticise your partner's faith yet also saying that you're 'appalled by pretty much everything' you've found out about Christianity! I'm not sure how you can square that.

The only difference between civil partnerships and marriage, so I understand, is that the former must be non-religious in content. But if you're appalled by Christianity, it's hard to understand why you're so keen for the 'right' to have a Christian marriage.

Nevertheless, surely it's currently possible for gay couples to marry. The only problem is that a couple can't have both a religious and legally-binding ceremony combined into a single event. I'm sure that the Unitarians, Quakers and other faith groups would conduct religious wedding ceremonies for gay couples - it's only the legal aspect that would have to occur elsewhere.

"Nevertheless, surely it's currently possible for gay couples to marry."

No it isn't. And neither of us wants the right to a Christian marriage. We want the right to a civil marriage that is not a "different but equal" civil partnership for gays only.

How is it different?

You know more about this than I do. I know about the differences in terminology, and the lack of a religious element in civil weddings/partnerships. But I can't see what else is involved. The media has focused on the 'gay weddings in church' angle, but you seem to be implying that there are other more important differences to be fought for.

Thank you for your reply - although I'm sorry to have diverted this thread away from its original theme!

The legal effects of a Civil Marriage and a Civil Partnership are, for all practical purposes, the same. What I do dislike, however, is having to use a different drinking fountain to heterosexual people even though the drinking fountain I'm allowed to use is almost the same.

There is a requirement for a ceremony and vows for a CM but no such requirements for a CP - it is merely a written contract.

Also, if I entered a CP I would not be 'married' to my partner - though many people use the term colloquially.

To summarise, I would just like to be treated equally!

There are no requirements for a ceremony and vows re CP? So one could conceivably enter into a CP via post, for example? Interesting. I understand that in some countries this is the case for heterosexual marriage. The ceremony, in such cases, would presumably be an optional cultural extra. In the UK, I imagine that most gay couples enter into their CP via a ceremony where they make public vows to one another.

It seems to me that the gay marriage struggle is more about equality than it is about marriage as such. Legal equality is the goal, even though marriage isn't always defined as a legally-binding secular contract; many couples see themselves as 'married in all but name', and the concept of 'common law marriage' has been validated in various cultures at various times. In some countries, religious and civil marriage ceremonies and legalities are kept entirely separate, and there is no expectation that religious people and politicians need to agree on what marriage means. Sometimes marriage is polygamous, etc. So different things are prohibited or allowed at different times.

On this particular issue, some Christians are concerned about the future legal implications for their churches. Their lawyers can advise them on that. I'm a Christian myself, but since this whole business seems to be more legal than theological I can't really work myself up into a theological tizzy about it. From a cultural and legal point of view, I certainly accept that there will be evolving views of marriage.