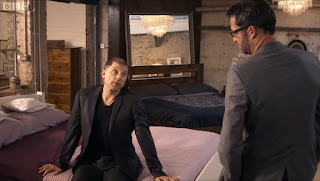 Undoubtedly there is a third series possible in Rev, but if it ended after two (and there's a Christmas edition coming next week) it would be a good finish with programmes that packed in known themes in the Anglican world in particular among the unmentioned denominations. It's as well written as say Fawlty Towers, which did stop, but it will always be hampered by the number of 'in' jokes and the absence of wider knowledge among the general public, whereas Fawlty Towers didn't require knowledge of the hotel sector in the tourist industry. 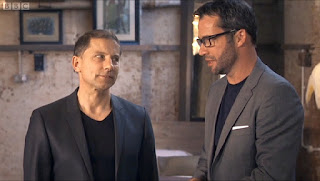 Anyone who saw the completely amoral archdeacon referee the football match in a previous edition realised that there was a secret there, and in the final one of the series the Rev and his Reader sidekick stumble across the Archdeacon and his boyfriend at a bed shop. The Reader is actually worse than the Archdeacon, and learns the tips about being ever so 'umble when going towards either getting ordained or becoming a bishop. Colin meanwhile gets a secular job, and immediately displays his inability to hold one down - he eats the Rev's pizza when he should have been delivering to others.

In all this the genuineness of the Rev is underlined. No, he really is without career ambition as all he ever wanted was to be was a priest in a place like this. 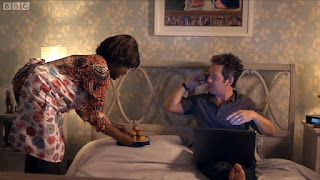 His frustrated wife walks off to walk with others to assess her marriage and as a result the Rev is jumped on by his eager cook and cleaner. Many male Revs know such doting congregants. In a third series the development would have to be with the headteacher. He fantasises about her, and she knows it and can manipulate him. I was interested though in how the Rev could talk to her on the level about the Archdeacon and his appalling personality preventing him from being a bishop, 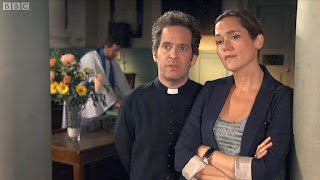 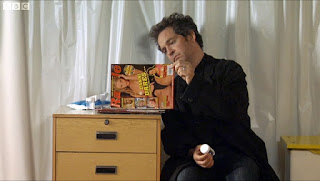 The point about the Archdeacon also was that behind his appalling bureaucratic personality was a human being, seen there in his relationship. The Reader's "Cherry" may be indeed a girlfriend or a pet or imagined as neccessary. 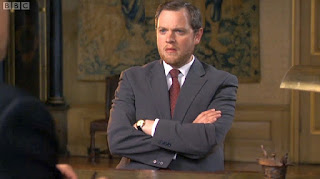 When faced with rejection by the interviewing Archdeacon, the Reader wields the big threat of potentially outing the Archdeacon. The Archdeacon, who'd said no, immediately folds and passes the Reader on to a clergy selection conference. But the suspicion was that the Archdeacon could see the Reader copying him and all the techniques and actually stopped him (until his interest was threatened). However, when the Archdeacon faced the now inevitable question when he was himself interviewed (he might have got through years ago), he had no choice but to admit his relationship. 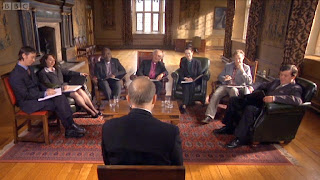 He could have gone either way, but to deny his relationship was a step too far. Of course he shouldn't really be a priest at all in an active relationship, and also if celibate he can be a bishop but these days no one would go through even on that basis. With the killer question asked, that's it and the game is up. Such is the Church of England today - corrupted by inequality and sex.

As a series it leaves everyone where they were. When Only Fools and Horses hit its peak it was because the characters had changed situations and the comedy was a matured 50 minutes a time. What went wrong then was that they became millionaires and the writer couldn't give up, so they lost the money again and the whole comedy was harmed as a result. So either it stops with the Christmas one coming or change has to take place.

For example, there are now divorced priests and remarried, and some simply don't tell the truth that allows them to move on. The only angle forward, given that the Reader is blocked and the Archdeacon cannot be bishop (and has lost a lot of his leverage), is for development with the Rev himself and for him not to be the self-doubting tortoise that beats all these careerist hares. We've had a high flying female curate but perhaps he needs another curate, and would certainly need one to counter what would always now be a frustrated Reader stuck in his ministry.

I have two criticisms that I think do stick out. 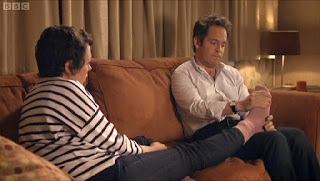 One is that the wife did not appear to be a solicitor at all, but a trapped vicarage-bound clergy wife. Secondly, after the headteacher lost her boyfriend she might have rebounded on the Rev in a far more dangerous way than this week's cook and cleaner filling the home vacuum.

Nevertheless the comedy has shown insight and hasn't had to contrive events too much; it would be a quick way to learn about the insides of the Church of England and the DVDs will have that potential. Church bureaucracies and discrimination create dishonesty where there should be expressions of honesty and love. This was a series that said the little guy can win through while all the mess goes on around, but perhaps the ethos of winning through needs challenging. Anyway, the writers clearly did manage to create an up to date Barchester Towers. 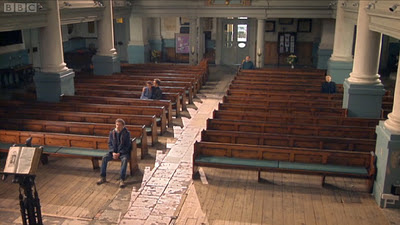 Note: all the images are from the BBC online broadcast and are here as illustrative.
Posted by Pluralist (Adrian Worsfold) at 02:26