Have a Postmodern Christmas: I'm Sure Yule Will

So here we are, where we all share in a holiday like we all use the common era dating system. It has its necessities, its various origins, and now we all join in one way or another.

The transient Muslim attender at the Unitarian church I attend, now back in Iran, sent an online Christmas card of Santa and sledge. So we can all join in. I have to say that putting carols to CDs to sing to has just about had me wasted. It was too much. I faciliatated a short informal singalong at the Friday coffee morning.

Sometime next year there will be more consideration of adding an extension to the Hull church at the front. It is practical, for better space inside and access, but there is the architectural side. I'm afraid that I am unimpressed: to me a concrete white front of two unequal curves has provided what an architect thinks a church might look like. I think it is minimalist modernism. And I had my own postmodern doodle, which is not to be taken too seriously. 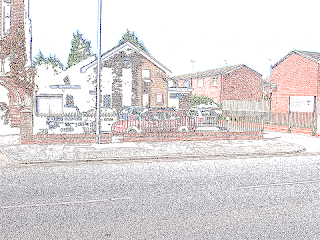 The idea is a postmodern frontage. Why is it postmodern? Because it has different styles in the one building, with a plastic top to light up that represents a flaming chalice, but a plastic window design below that represents the window of the old steepled church knocked down on this site in 1976. It's a bit playful.

So I was asked what is postmodernism in architecture, and it is in bringing several past styles together that didn't mix, and use them to point to the future. So postmodern art? Well, that is playful and a joining of styles that were once distinct. And postmodern theology? I said that represents the literary turn, so that there isn't any objectivity in the world as such, and you can't do history, so what you have is the text, and for conservative postmoderns you have the text as encounter and you identify and perform according to that text. For liberal postmoderns there are no boundaries, so different texts eclectically mix and match. Trouble is, some evangelicals that call themselves postmodern still go on about personal experience, which is not what it should be about. Liberal postmodernists should show a tension between the self and the collective - the intersubjectivity of conversations about constructing the meanings of things. There is the market place and the person in the market place.

So you can have a postmodern Christmas. That's the wrapping paper of the carols, and you discover such text is all you have! The wrapping paper is the message. But liberals will want to draw in other meanings, and the Pagan is the most obvious, but then also the ideas of the universal baby, new life, new beginnings, then that the Buddha was given a miracle birth, or some nativity ideas could well have come down the Silk Road as did ideas of resurrection at the other end of living. Buddha did actually beat Christ to recognition by about 500 years.

But as with all postmodernisms, some of this is just intensive modernity. Ideas of Christmas as the universal baby or new beginnings were subjective ideas anyway. It's just that the postmodern reaches out for ever more connections to the point of loss of overall meaning too. The conversation becomes almost chaotic, overflowing with different ideas on the meaning of Christmas. Like in architecture, all sorts of things jumble together. It becomes postmodern when the modernist intensity is such that there is a collapse of the sense of space and time.

Have whatever sort of Christmas you understand. I will. Yule will I'm sure.
Posted by Pluralist (Adrian Worsfold) at 20:28