What if One of Us

The service on Sunday is congregational, so I hope to be able to introduce this music to the 'divine worship'... [This happened - it formed a mini-sermon and music before the collection]

I've chosen a piece of music that I rather like as music and also theologically. One of Us is a song written by Eric Bazilian and released by Joan Osborne in March 1995 on her album Relish. The song was written in one night, to impress a woman and it worked in the sense that Eric Bazilian married her.

The song asks about how one relates to God; and whilst it ties in with both the Islamic chant that God is Great it also relates most closely to what can be called secular urban theology. Relating to the central Christian theme that God became one of us, the song makes the notion even more ordinary - as in God being just a stranger on a bus trying to make its way home.

Harvey Cox wrote a celebrated book in the 1960s called The Secular City, which is a theology particularly derived from German modernist evangelicals Karl Barth and Dietrich Bonhoeffer. 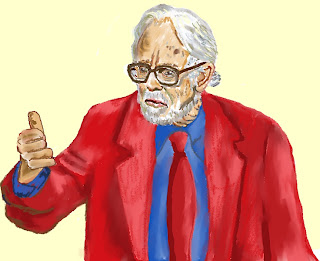 The idea is that instead of asking questions of our place in the language of religion, we are just busy, and trying to live ethically under an invisible God and, Harvey Cox says, a Christian revelation. The book is a complete theological acceptance of secularisation as the norm of thinking and living and therefore the freedom of humankind to organise itself in whatever way it cares within the city. This approach is highly critical of denominations, and sees a special role for Christians in universities rather than in inheriting mediaeval forms of religious understanding. Theology and social science, indeed theology and politics, overlap. This approach to theology was very much in opposition to the Paul Tillich approach of existential theology, that is the theology of asking lots of questions about existence for which there are systemic theological answers. People are too busy, too urban, to bother to speculate, but they meet the transcendent in both the big political changes and in the little - especially social - activities of life and yet the people who do so believe in such encounters share the same discomposure [269] as those who are non-theists and say no such transcendence exists.

If you think such secular theology contains the seeds of its own destruction, via a contradiction between the secular and the theological, then such a cultural rejection of religion has been tackled by making this modernist theology postmodern: in other words modernist secular theology of invisible realism became a theology of human doing and human performance based purely on text.

Although this landmark understanding of modernist secular action theology gained quite some popularity, and was fully agreeable with a sort of linear progress to secularisation, a human insistence on asking questions has persisted; and we can hardly be church without asking questions. And not everyone is quite so busy. There is nothing wrong in asking questions: it is the answers that have been the problem. Indeed this secular theology assumes too much about the givenness of the hidden revelation, and even the postmodern theology that followed later is too conserving about the core revelation. Harvey Cox went on to change his mind: secular modernity was too optimistic, and so he looked east and indeed embraced the religious questions of many faiths, faiths that are capable of inner transformation. He now says that the first three hundred years of Christianity were the Age of Faith, then came the Age of Belief that lasted until very recently, and now we have an Age of the Spirit with a deliberate move away from dogma in our religiousness: there is not a textual turn globally but a personal experiential turn. The song indeed asks questions, and one of the strongest questions for many is about the invisibility of transcendence - where has God gone? - and what it is to have any kind of belief today; but the song does say something like - and this is interesting - that if you were to meet God, such might be just "a slob like one of us". Some people celebrate Christmas with all its tinsel and jolly myth, but one central idea behind incarnation, especially in the secular city, is that it is utterly ordinary and unremarkable.

One of Us by Eric Bazilian sung by Joan Osborne.

'The book is a complete theological acceptance of secularisation as the norm of thinking and living and therefore the freedom of humankind to organise itself in whatever way it cares within the city. This approach is highly critical of denominations, and sees a special role for Christians in universities rather than in inheriting mediaeval forms of religious understanding.'

What about Christians who can't and don't want to get jobs in universities? I don't know how Theology as an academic subject is managing in this era of rising uni tuition fees. Maybe the future of Theology is in History or Philosophy Departments, etc. In any case, it's only a privileged few who can enjoy this kind of work environment.

I'm sorry, but it does seem terribly elitist for the author to suggest that 'Christians' ought to be working in universities!

The book looks interesting, but I don't think such a secular theology 'contains the seeds of its own destruction', for the simple reason that there doesn't really seem to be much left to destroy.