If You Don't Believe It Why Do It?

Oh dear. Now some want to sing carols on Friday, as there is no service on Sunday. We've had two services of these already. This along with mince pies on Friday. So I am not done yet with collecting and providing music. All I know is that New Years Day has a service completely clear of Christmas music, which is different from more standard Christian churches many of which won't touch a carol until Christmas Eve. In those days I went to the night time service, 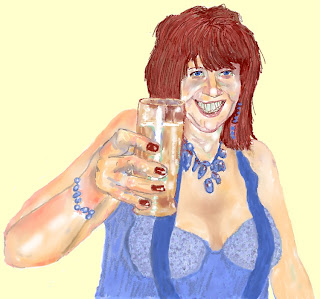 and then avoided carols from then on. So I sort of joined in with the myth, to some extent, given that it plugged in with the rest of the myth all year round and I was participating in it as a year-round calendar.

The point is that whilst I can see at least a point about Easter: the tragedy of life, cruelty and always the possibility of coming out on the other side, I've never really got on with Christmas at all. I know it can be about the universal baby, innocence, joy of new (human) life and all that, and a sort of second birthday for all, rather like the Queen has two birthdays, but it has never had meaningful significance once available to choice.

As for the Jesus stuff, well that has never been important. I've taken the view, from the beginning, that he was born in Galilee and unnoticed, probably (or as likely in) in Capernaum. Actually there is a not unexpected parallel with his death: around the passover period Paul as Saul would have been in Jerusalem and a crucifying of a certain Jesus drew no interest from him whatsoever. That's what the occupying Romans did: swept up the noise makers and kept up an example of oppression. It's the existence of the small community and last days thinking that brought Paul to the idea of the Law as limited and a Messiah for the last days as a breakthrough and contradiction to aspects of the Law. But let's leave that for now, as it is thirty years on. Incidentally the ministry of Jesus can have been extremely quick, perhaps no more than a year.

But to go back. The whole thing about either starting in Galilee and going to Bethlehem, or starting in Bethlehem and going for a long trip, is pure myth. 'Can any good thing come out of Nazareth ?' asks John's Gospel, and Jesus himself never made anything of coming from Bethlehem (which he surely would have, had he had such an origin, in terms of adding to his authority). There was no empire census requiring also women and children to travel, and indeed no taxation basis for Joseph alone to so travel. Herod died 4 BC so how could have he been alive when Quirinius was in office? Luke's account is pure fiction. Matthew's journey would have been 450 miles and Matthew even adds to prophecies to meet (to be called a Nazarene). There was no massacre of innocents. The universe didn't alter itself to provide some star, presumably a story because magi looked upwards and such predictive astrologers were wanted. Magi followed a star that fell from the sky when Mithras was born and Mithraic legend also provides shepherds. Isaiah 1:3 helps the birthplace, as does Hermes, and 7:14 is the origin via the mistranslation into Greek of virgnity at birth. All human beings need two parents.

The fact that these things can be written is evident of what passes for 'truth' in the Bible once the myth grabs its place and gets developed, this in particular by a later community to backtrack and announce the birth of a great prophet (whose titles were undergoing escalation). The source of these stories is the Jewish scriptures and the need for consistency. Some evangelicals today ask why writers would put in deliberate and known non-truths, and thus demand that all of it must be true (like some historian working with first hand documents). Er, no; unfortunately for them, it isn't like that. It is why the New Testament is full of mythical interpretation and is only ever biography-like.

I've over purchased food like the rest, and the sweeties I normally shun (looking at my budget and body size) have been let through. I suppose I regard the present as a kind of festival of lights, when it is coldest and darkest and yet we, as humans, make light and also keep eating for when things grow again. But I'm as little into the Pagan thing either about the round of the year: OK, it is but so what. I'm much more interested in the puzzles and explanations of science, where the mysteries are far more fascinating and that is because they do provide workable explanation. There is so much that is incredible and I'd rather busy my brain with this material, to the extent that I can understand it and then to push to understand it a little more. For me, theology ought to be humanist (in the most general sense) or it is about the "woo woo" that Brian Cox mentioned most recently. Theology needs to be about parameters of the possible and impossible.

Ernst Troeltsch said the Christian myth was powerful simply because it had shaped Western society, almost like a truism. It's internal truth or falsehood was irrelevant culturally. But, even not as a literalist, this is no excuse to centre one's own story on something far more insignificant than its historical impact. It annoys me even that I 'sacrifice' my myth making from a larger minority into a small group that particularly denies a narrow incarnation through the year, and one that also looks at other insights, I find that it capitulates at Christmas time and repeats the Christian season's worst and most gooey features.
Posted by Pluralist (Adrian Worsfold) at 18:10

Christmas as commonly understood is a popular festival, isn't it? The Puritans banned it, and even when it was reinstated, Christmas carols were not allowed to be sung in church, so I understand.

I'm a Christian, but more and more I'm coming to the conclusion that Christmas should be left to non-religious or to non-specific 'spiritual' contexts. Or simply to secularism.

Church leaders seem to think that Christmastime can have an evangelistic purpose, since it's the one time of the year when Christian language is acceptable to the wider public, but I'm unconvinced. During the Christmas season, Christianity doesn't absorb popular religious feeling, but rather, popular religious feeling absorbs Christianity. Christmas forces the church to recognise the strength of extra- or post-Christian spirituality and popular culture, but the reverse is not true.

I don't know where this leaves Unitarianism. Perhaps Christmas could be a way for Unitarians to reach out to 'cultural Christians', to people who enjoy singing carols, but don't even pretend to believe in their content. After all, even Richard Dawkins likes singing them! There was an article in the Guardian once, about how only atheists should be singing carols. Maybe that sort of attitude could work to the Unitarians' advantage....