No Rev for Me

I received a letter this morning from the Director of Ministry for the Unitarians saying the interview panel has decided not to interview me on this occasion. I've taken up the offer for a conversation on Monday at which the Director will have papers in front of her. I'll be more informed then, so this blog entry is before all that and in general terms.

First of all, I am not surprised. I thought they might just interview me, but wouldn't be enthusiastic to have me admitted for training. This just saves on the travel.

When I was told to leave Unitarian College in 1990, after a largely wasted academic year there, I said to myself this would take ten years to sort out. In the end it took more than twenty to arrive at a point that actually is a form of closure. I needed to make the application and then to see what happened, to leave it in the hands of others.

It seems to me that the Unitarian denomination wants people for its ministers who are like Unitarian sticks of rock, with the name going right through. The people have to be deeply within the denomination, active at several levels, and without any doubt to their commitment. When it comes to ministers, what they want (I think) is denominational workers and co-ordinators: principally people's people (quite right too) but then not intellectual carriers and creators of a movement as well. There is plenty in the way of writing warm prayers but theology has died. There is no theology of diversity, no working through the postmodern in the context of past Unitarian thinkers applied to today. So if we think of 'workers and intellectuals', the Unitarian denomination is now, really, purely congregationalist and about workers.

Not that I would not have worked. But let's be clear. What was lost was the last twenty of so years. In that time I would have been creative and dynamic, and made all sorts of risky enterprises with action and thought. I would have been a bit of a loose cannon only in the sense that some of the available congregations were small and stuffy, often producing a very limited and rather clapped out form of liberal Christianity (not even a radical Christianity of some mainstream churches), and I'd have wanted to make something more creative and diverse. People then didn't trust my neo-Pagan-Humanism as was.

Today I am definitely not that through and through denominational person. After all, in 2002 I was right on the margins of the church I attended, and left in 2004. I made a religious life on the other side of the river and only returned about 2009/2010, having become marginal in the Anglican world. The reasons were different: my marginality in Hull was in how people related to each other, whereas my marginality in Barton was simply belief and practice. I was thoroughly post-Christian.

The problem has been I've seen myself in ministry - as a stipend receiving fully rounded minister in all aspects, including that of reflection - since before I even took up any formal religious affiliation. It began back in agnostic days at the University of Essex, during a stay where the academic course collapsed, but where I saw a model of ministry that made a lot of sense. That then was put into action in Anglicanism some years later, but I've never believed the basics in the C of E and so have always struggled to stay with that. It was my decision in the end, once in contact with the Unitarians, to go down that route, and after dismissing myself at the first interviews was accepted a year later - only to discover within training that the denomination was not as 'free' as it makes out within each committee possessed congregation.

When I have thought of myself having take a different road, I think by now I'd be utterly frustrated. I can't say the Anglican words and don't wish to; had I been doing it I'd have become like some old soak, I think. I would have lost credibility with myself mouthing and representing things beyond belief. 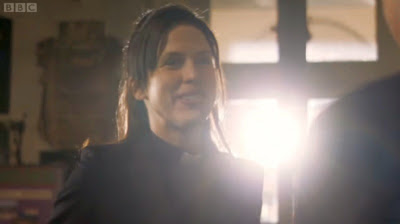 BBC online image from Rev - and no light of appearance with me!
Technically I don't even qualify as a candidate for Unitarian ministry in that I have never taken up membership of a congregation since. I attend weekly and I am as active as anyone, now back at Hull, but although I am now seen here and there beyond Hull I remain more ecumenical and free thinking. I justify that in Unitarian terms too, after Martineau himself, but the pressure to be reliable is to be a dyed in the wool denominationalist.

There is something else as well. I keep looking at something that seems to be dying. At 52 and ageing, I'm looking at something that would have received still creative effort but the situation is becoming chronic. There are successful congregations where there is a community setting or a radical urban ministry, but too many places are handfuls of people. They are where I am; we went to a place that once had turned itself around only to be disappointed. In such a situation, the role of ministry (paid for from historic money) as a beacon of a changing tradition and as pastoral needs some serious thinking through, but too many efforts are in propping up the ship. All denominations are falling fast, but being small the Unitarians are facing the critical structural issues earliest.

I don't think many people know now why they are Unitarians. I see it as being a social gospel of diversity coming together - people of difference who try to get on with each other. (Actually the people look rather of the same sources, so it is mainly difference in thinking and even then it isn't so much different.) Difference able to focus together is what our society needs. But others still think of the continued Unitarian existence as some sort of gentle Christianity, or easy listening religion. It actually isn't, because it is the difficult business of trying to work out an ethos of compassion from diversity and taking the risk of being open to the plain and romanticised, the rational and the irrational. But there is a real risk, that I would have tried to counter, that the Unitarian denomination is becoming a thought-less denomination. This, it seems to me, is a bleak prospect.

I wouldn't have wanted to train at Unitarian College in Manchester, and not because of the ecumenical aspect (which I rather like). It is because the Unitarianism is defined there in a constrained manner. I would have preferred Oxford (or however linked to it at distance learning) but apparently that also has 'right wing' tendencies within. It's as if the radical edge is condemned to be edged, as if there is no sharpness or definition.

My view is that the denomination doesn't just need workers and pastoral people. It needs characters that are odd and at the margins, for that extra creativity and risk. Such people are always a bit shifting along and different, and my offer was something like that and use of intellect.

If I sound too independent, I have to say that I find some independents I've encountered yet again disappointing. I'm really not into dressing up and grand titles and all that. I like the notion of a lay movement in which the ministers are facilitators, which was my intention - to use the time to reflect and pass on. But then, so what? Isn't the Unitarian denomination, as it structurally creaks and cracks, simply becoming a loose collection of lay people doing just about everything? That's probably where the future lies. Lacking a progressive education model of ministry, the basis of ministry is being lost. We'll probably end up locking up most buildings and quietly meet in houses, probably with a web presence too. These are interesting times for formal religion, maybe for some end times in a way no one once quite believed.
Posted by Pluralist (Adrian Worsfold) at 17:52

Actually this blog makes for interesting reading. As someone also blackballed from the Unitarian Ministry training board but from a very different perspective it is interesting to hear someone speak out. As someone formerly trained in another denomination and someone holding the Title Reverend for many years, I do wonder at times as to how inclusive Unitarianism is? "All are Unitarian but some are more Unitarian than others", often shouts out to those of us on the fringe of the movement.

The problem is that Unitarianism does present round holes and if you are a square peg you then do not fit the requirement. My view of ministry has always been something more of 'being' than doing, and the shape of the peg should not as such matter.

After reading this, I feel that I am now even closer to hearing the bells which will sound a death knell.

It will be for the hope that Unitarianism in the UK might come to actually provide what it often appears to promise in it's publications and cyber-presence - an inclusive way for spiritually-aware people of diverse personal faith to work together to enable their own and each others' spiritual growth free of the dead weight and divisiveness of creedal requirement.

However close the bells might be however, there is still time for the change in self-definition necessary to free that potential.

'The problem is that Unitarianism does present round holes and if you are a square peg you then do not fit the requirement.'

A few thoughts occur to me.

Ministry does have its formal structures and requirements, and these often seem more rigid in liberal churches than in evangelical ones! Declining churches worry a lot about keeping congregations happy, and if you don't 'fit in', the worry is that you'll end up driving even more people away. This may be an inadequate reponse, but this is how things are.

What's wrong with religious groups meeting in homes? That's what the early Christians did. Maybe Unitarians could take up the cell church model and run with it. Do the Unitarians have church plants? Perhaps building a group of people who want to engage in theological exploration together would be better for you than trying to run an established congregation that's set in its ways and has its own ideas. The history of the church is full of people who've committed their lives to founding new spiritual communities.

However, you say you're not keen on 'membership', yet you want to minister to people who do, which does strike me as a problem. You seem to want to lead and instruct a faith group while remaining permanently aloof from it. This doesn't seem very 'friendly', and congregations will pick up on that feeling.

If you don't really believe in institutionalised faith it's unsurprising that your chosen institution has its reservations about you.

This is sad. I think it is very frustrating when someone feels called / led / wants to be a minister, but it is not possible to be one.
The who/what/when/why/where is a separate issue..

but still, it is sad. I wonder, but do not know, what would have had to be different for it to come about?