[Updated below...] So this week's Rev theme was interfaith, with football as a religion too. Indeed the Archdeacon runs an interfaith competition (football is also war without killing) and, when he turns up to prance about as referee, he says to Rev. Adam, "Today my Bible is the FA Code of Conduct."

When Adam gets aggressive with losing, he scrums and tells it like it is regarding the nasty side of other religions, and then takes advantage of his after party wife throwing up to score a goal that the referee allows - it is, after all, in the rules. 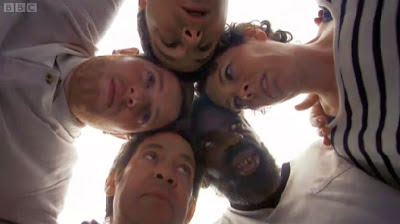 Colin, not long ago having been baptised conditionally is suddenly Buddhist orientated. He even reacts against the Rev.'s smoking (after all, Colin laced his drink previously). He says that, "unlike Christianity", Buddhism is about non-violence and not telling lies. Colin though loses that peaceful Karma to the alternative religion of the game when the Rev. goes forward and scores his goal.

The Reader prefers play bowls; his objection to football is illustrated in not many signing up - due to "congregations of over 60s with hip problems". There is even a reference to the feminisation of Anglican Christianity, as Rev and Reader smooth each other's 'dresses'. 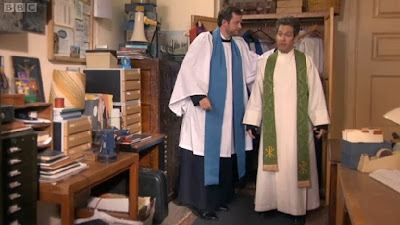 But all through this is the ongoing sub-plot, with the headteacher that the married Rev. fancies, and she knows it and even plays on it. Plus there is the frustrated vicar's wife and the prospect of a dull vicar's wives' party. One turning up to what turns out to be a good night is a Rev. herself; Adam asks her about the chances of a vicar married to a vicar. She replies, "I know - quite high."

Yes, Revs. get to marry Revs., don't they. I can think of one recently in the blog world, which my own imaginary side of my blog rather predicted. (Go back and look at the story of Radio Chadderbox...) 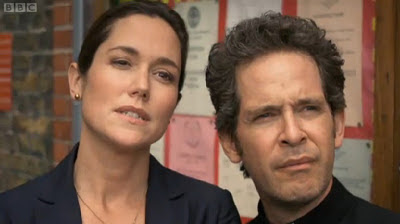 As for Adam's professional fancy, she dominates him. She asks Adam if he would like to see her in her shorts? Er, no... The new teacher (who was in Channel 4's Teachers and much differently) represented the New Atheists, and he clashes with the Rev. all right. He even knows his religions better than the Rev., in an Anglican schools with 60% Muslims. But he doubly clashes because she falls for him and he starts calling the headteacher 'Babes' (surely unusual?). He builds her a bicycle. This teacher was employed because he was "good", she says, not because he had lied about being a Roman Catholic (a reference to the ongoing corruption of faith schools) - and then he also comes and plays football for the Roman Catholics. Which is a reference to people retaining denominational labels when the belief isn't there. 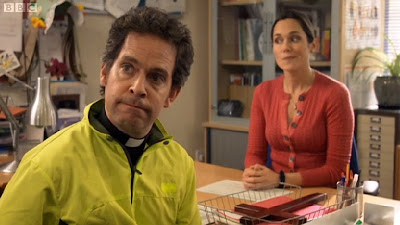 But the bicycle killed him and allowed the Rev. to take an assembly with a story about heaven and thus to quite easily pass the test (score 1 indeed) as to whether the school was being true to its religious foundation or not. The Rev. has to say that the teacher did not believe in heaven but he does, although he does not know what it is.


So although when I watched it first I thought not as good as the two previous editions, I think they bunged a lot in again and it is a good insight into the Anglican world. 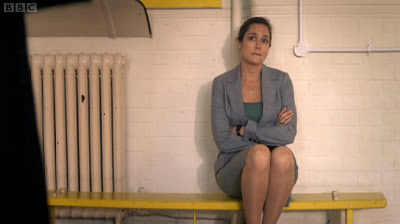 Two more to go, this series, and I wonder if he gets any closer to his attractive headteacher... If the series is cumulative, she might turn to him (after all his wife wanted a baby over a few of them; no mention this time after that horrid kid), but the episodes are also self-contained. It's very good, and of course the comedy writers must also know when to stop.

Oh, and he shows the cross to the atheist teacher is if in a horror film to something satanic, who takes it and subsequently holds it upside down. And bicycling is also represented, like football, as another religion - as in the Rev. didn't know she was... not Catholic but a bicyclist, when she turns up with "Matty" for the football game (to play for the Catholics). Once again the teacher is another successful figure that the Rev. is jealous about. The series is all about the story of the hare and the tortoise, and many an evangelical doesn't like the Rev. because he is a tortoise and not one of their hares.

Note: all the images are from the BBC online broadcast and are here as illustrative.
Posted by Pluralist (Adrian Worsfold) at 03:25

you've started my day off the right way, Adrian