Is the Rowan Williams to resign soon? The Advent Letter 2011 suggests he is. In his own words he puts:

Throughout the time of my service as Archbishop I have tried to keep before my own eyes and those of the Communion the warnings given by St Paul about the risks of saying 'I have no need of you' to any other who seeks to serve Jesus Christ as a member of His Body.

He says we all live in imperfect Churches, but he wants to improve what he sees as one. 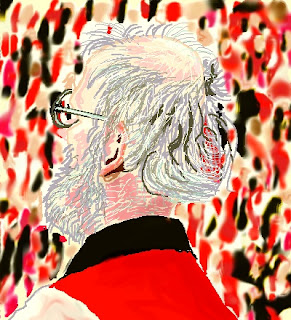 Four years on from the infamous, even fundamentalist-accepting, Advent Letter of 2011, the one written for this year is still banging on about the Anglican Communion Covenant.

First of all there's a list of his travels and then the matter of one voice in the world comes with the 'holistic mission' within the Anglican Alliance for development, relief and advocacy, the activities around which:

...have shown the importance of Anglicans speaking with one voice on issues of poverty and injustice.

It is one of the true signs of hope for the Communion that we are capable of meeting and working together...

Thus the Archbishop of Canterbury gets to the Anglican Communion Covenant, via the Primates needing to discuss further the proper extent of Primates discussing. (Well, if they don't know this, how can they have a Covenant?) He still wants one, despite the negative responses that have been building up from whole provinces, from within provinces, and via campaigning. He clearly realises that there is opposition:

In spite of many assurances, some Anglicans evidently still think that the Covenant changes the structure of our Communion or that it gives some sort of absolute power of 'excommunication' to some undemocratic or unrepresentative body. With all respect to those who have raised these concerns, I must repeat that I do not see the Covenant in this light at all. It sets out an understanding of our common life and common faith and in the light of that proposes making a mutual promise to consult and attend to each other, freely undertaken. It recognizes that not doing this damages our relations profoundly. It outlines a procedure, such as we urgently need, for attempting reconciliation and for indicating the sorts of consequences that might result from a failure to be fully reconciled. It alters no Province's constitution, as it has no canonical force independent of the life of the Provinces. It does not create some unaccountable and remote new authority but seeks to identify a representative group that might exercise a crucial advisory function. I continue to ask what alternatives there are if we want to agree on ways of limiting damage, managing conflict and facing with honesty the actual effects of greater disunity. In the absence of such alternatives, I must continue to commend the Covenant as strongly as I can to all who are considering its future.

But it is not how he sees this Covenant that matters. It's how others would see it and use it. Obviously he won't be around when it operates: not that he could stop a bureaucratic process once in motion. Later, he continues:

The question remains: if the moratoria are ignored and the Covenant suspected, what are the means by which we maintain some theological coherence as a Communion and some personal respect and understanding as a fellowship of people seeking to serve Christ? And we should bear in mind that our coherence as a Communion is also a significant concern in relation to other Christian bodies - especially at a moment when the renewed dialogues with Roman Catholics and Orthodox have begun with great enthusiasm and a very constructive spirit.

And also on a uniformity of views in the Communion, seen to be a Church:

Yet we have to pray continually to be made more truly the Church by being set free to receive more of Christ, more of the gifting of the Spirit. As St Augustine wrote in his treatise on baptism, if we were a perfect Church, we should no longer need to pray the Lord's Prayer, asking for the Kingdom to come and for our sins to be forgiven.

But there is actually some more to this, too, and with something of a dig at the unmentioned:

This year has been the anniversary of the great 1611 Bible, the King James or 'Authorized' Version, and in the UK we have had a large number of very powerful and imaginative celebrations of this. It has focused for me yet again the question of what a Church looks like that is authentically biblical. It is clear enough that Christian communities that are vague or lukewarm about the unique miracle of the Word made flesh once and for all in Jesus of Nazareth, and about the revolutionary demands this makes on individual lives and relationships, are imperfectly biblical churches.

Whilst, he says, don't attack or undermine them, like he just did. He's not talking about the Quakers and Unitarians, after all, and he ain't no liberal anyway.

What he doesn't get is that a Communion already so divided up won't come together because some piece of paper outlining a process says so. One third of the Communion's Primates absent at Dublin would not trust this process as adequate: it isn't doctrinal enough. Many wider afield are disappointed. Other provinces do see that the process affects their autonomy and ability to make decisions. After all, either the process does or it is pointless.

The contractual agreement that is this document (it isn't a Covenant) purports to offer is not one that carries sufficient trust to make the agreement. The Standing Committee is not seen as 'representative' and indeed the most representative body, the Anglican Consultative Council, is the least involved.

He keeps misunderstanding a basic fact, that the Anglican Communion is not a Church, but consists of Churches. There will always be sharp differences within such a Communion. It does not have to agree. It is not some body to show off as unified to the Orthodox and Roman Catholics, Churches for which there are also differences with many Anglicans (and not with some Anglicans in each case). Anglicans have had a more general view of unity on core elements; but in as much as some are adding to these core elements then the disagreeing will inevitably be more obvious and something for his successor to handle rather more loosely and with less of a sense that he is presenting a Church to other Churches.

Unless, of course, the Covenant is passed, and then the next Archbishop is forced into a bureaucratic role, and the Church of England that provides him is frozen as regards what it can ever decide for itself. This is why Rowan Williams's 'inability to see' is basically due to wearing blinkers.
Posted by Pluralist (Adrian Worsfold) at 04:58

Whoever replaces Rev Dr Williams is going to get slammed just as much, sooner or later. They need to have a thick skin and be presentable, but does it matter otherwise?

Yes, someone who's mastered the basics of personal grooming would be a start.