It's good when a new person brings along a new person, as today. And there was another unseen face, but unfortunately (and city centre churches do get this) he decided to go into the kitchen, steal some money and go. I'm amazed how quietly such a disturbance gets handled, and how sad it is that some folks who are welcomed many times over as they sit with hymn book are clearly there just to jump at the main chance and run. We can guess what his theft was for.

The service was taken by the most influential of the small denomination's music people, who remarked on the pleasure of seeing faces unseen before. His service was on a variation of the idea that you sing your group's theology. The 'problem' of having diversity and difference as the basis of coming together is clearly a difficult one to get across to the outsider, however valued it may be and 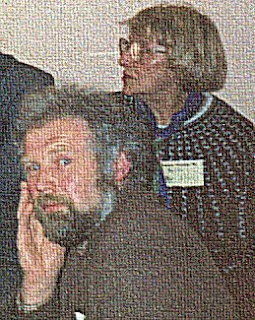 understood on the inside. Professing Freedom, Reason and Tolerance is limited in terms of content or behaviour. So he has had his small project of generating some sort of statement of values and principles that Unitarians profess, and do, as indeed the Yorkshire Unitarian Union wants to inject into the General Assembly Executive Committee's activity. Note that this is about values and principles rather than beliefs.

So he pointed out that principles and values can be found in the hymns we sing, and indeed produced a list of common themes in the hymn books readily used. The preacher and music maestro has himself been involved in producing the large new hymn book supplement Sing Your Faith and adding to its tunes. I didn't get to say that I have already bought my own copy, but he said it has since sold out and needs another print run - and this congregation has not bought copies (partly for music provision problems). I see that the book we have is available for sale in India!

He and I talked about recent controversies (for others) that made page three in The Times recently, when Unitarians should be able to extend the provision for rites of passage to fully registered gay partnerships.

By the way, the photo followed an extensive search. It's from the 1980s, at a General Assembly, is a zoomed-in detail of a group photo, rendered and textured, and the time I spent looking and diverted left me with no moments to do a cartoon likeness!

Asked by the priest in charge after the evening service about how I'd score - my life presently, like 1 to 10 - I said, "Oh, 4 out of ten." One thought "Oh dear," yet he how optimistic for me (probably true). But I said I thought the scoring was for his service (or sermon with prayers, and the curate who led it); but not so because the service done is tomorrow's chip paper. "Oh well I'll put my scorecards away then," I said, as I opened my car.
Posted by Pluralist (Adrian Worsfold) at 18:01