At present I am listening to the various sound files of the Forward in Faith conference, and indeed writing notes from these directly into a text editor. I think it is rather good that they provide these files and so quickly, and so far (only the introduction and part way through the second PEV bishop) the presentation is rather calm and rational and upbeat.

But I'm thinking, whilst listening, about the Catholic Anglicans who come from the Charles Gore tradition - those, for example, who do 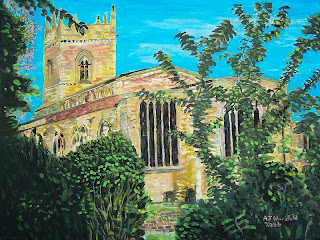 accept the ordination of women to the priesthood and to the episcopate. There is a complete division here. I have heard Forward in Faith describe them as 'Faux Catholics' as a put down, as much a put down as the rather nasty reference by Geoffrey Kirk about Christina Rees as "that graceless woman".

Nevertheless, the Roman Catholic Church and the Orthodox, and this grouping, do regard Catholics who accept full inclusive ordination as say 'flavour of Catholics', and it must be from this institutional position that the Catholics that remain in the Church of England will be 'Protestant Catholics'.

Of course there is the argument, and set against that of Geoffrey Kirk's (surely unnecessary repetition in that company), that there is good evidence of female headship in the early Churches, and not just Gnostic, and that Paul was revolutionary in his last days equalitarian outlook, and that it is in later patriarchy that women become squeezed out of full ministry from the proto-orthodox stream. Within the period of the wandering Nazarite grouping in Judaism, there is plenty to suggest a very high status for Mary Magdalene, whatever position the developing proto-orthodox Gospels may give to and deny from her (though, with Judas, the wrong choice, the twelve to head the twelve mythic tribes of Israel in the coming Kingdom do not include this companion in a leadership role), and of course she is not recorded as an Apostle of the earliest Jewish 'Churches'.

Nevertheless, it was the left wing of the Reformation that recovered women's ministry as in the early Gentile Churches, and then for social reasons not as quickly as it could have. This recovery started in the most radical of sects and Churches, then moved to liberal Churches, and only in these days has it reached the orthodox strand (in terms of acceptance of the Nicene and other Creeds and the various Councils). But because of the institutional conservation of the other larger credal Churches, it is just a fact that women's ministry (for now, and probably for a very long time indeed) is part of Protestant Catholicism.

There is another Catholic grouping that also accepts women's ministry in full, which is the esoteric liberal Catholic strand that tends to be anti-Reformation. There is one Bishop in England of this ilk. This is a tiny grouping as such, but still important. It also picks up the argument about the earliest and full leadership of women with men in the earliest Christian Churches, but further continues the inclusion through the Gnostics. It combines its Catholicism with other faith expressions (as in Theosophy), and very partly through some left wing Reformation expressions that are almost post-Protestant in their rush to early radicalism (but then were Protestant). It has produced a flexible form of Catholicism found in tiny and sometimes inflexible groupings.

Personally I regard Catholicism, as in the Church of England and elsewhere, as no more than a set of styles and flavours,

like an addition of sauces to the cooking. The idea of ontological ordination is so much puff and magic, and indeed ordination itself is puff and magic, just a ceremony of recognition (but important for that), and this is available in many ways that uses and does not use the language of ordination. Nevertheless, institutionally, if Forward in Faith people make the break then, in a sense, they seal the institutional deal. It means not a unity between Anglicans and Rome, or between Lutherans or Old Catholics and Rome, but a wider gap, and one would now expect this Pope in his few years available to make gigantic gestures towards the Orthodox too. His hands are on the accelerator and the steering wheel, at least while his brain works.

From the Forward in Faith sermon, at a Votive Mass of Our Lady on Saturday, 24th October 2009 delivered by Revd. William Davage SSC:

You cannot dilute the Faith as would the liberal catholic: that suppurant oxymoron.

[Supparation is the formation act of becoming converted into and discharging pus.]

Posted by Pluralist (Adrian Worsfold) at 21:59