The Chickens at Blue Velvet

We need to go back in time one day to understand a little more about the previous episode in the Blue Velvet parish saga. The first episode was about a midweek morning. Remember that this is the Blue Velvet parish, so those of a younger mind or with a delicate religion may not believe it all.

It was mid-afternoon. A semi-dressed Reverend Alan Peart, 51, was flapping a towel over Mrs Janice Capron, 31, lying full length on his double bed 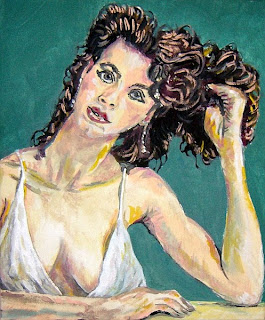 with the sheets completely to the side, she giggling and saying that she was very hot. She added, "I'd like to use your new shower." This was the one finally put in by the Church authorities.
"I'll get on with some work - the agenda and preparation for a difficult PCC meeting tomorrow in the Church Hall," he replied, and he stopped flapping the towel.
She sat up and took it off him. She said, "If you want me to come more often, you'd better have some reasons for our gossiping locals."
"Back to Church Sunday, I'll put it on the agenda."
"I'm not coming to your church. Not me, nor Eugene. Especially not Eugene."
"I know that, it's just like, then, you're clearly someone else. Someone to attract back. It's cover. I'm pleased though you want to come back here again - not just a delayed birthday present."
"I'll come again with you," she said. "OK. Do that, but we need something else."
"Domestic work?" Julia is busy in her parish, so, you know, like, I am busy, could do with domestic help, that sort of thing."
"Too obvious and people don't have me down as the domestic sort."
"You, a kept housewife?"
"Tell you what. Ask my mother about chickens. When I was a girl I used to do everything with the family chickens; I used to love my chickens: loved the eggs and, when a bit older, I even used to go and wring their necks."
"Ooh."
"So you start to keep chickens. I can then come and look after them. Everyone of my mum's generation knows about me and the chickens. Then I can even do the vacuuming too."
"Where can I get them from?"
"Oh my mate Johnny, the milkman, he will bring them for you - a cockerel and hens; he'll even make the compound and henhouse like after he's done his round each day. I'll tell him; he'll do you it all. Do you know where he is this afternoon?"
"No. Of course I don't. Do you?"
"Buying loads of towels wholesale, loads of people in this town suddenly want towels!"

At the next weekday service, Reverend Peart stood in front of the congregation. "Just an addition to the announcements, then; I'm going to put part of the vicarage garden over to keeping chickens. Doing my bit for animal welfare, and should be all done and ready for Animal Welfare Sunday some weeks ahead."
Mr Peter Ward, 70, sat alongside Mrs Janet Ward, 62, raised his hand. "I can tell you everything you need to know about chickens, Reverend. We used to keep them."
"Oh, perhaps you or... maybe you can help me set up and look after the chickens? Yes, I mean, yes you could help me perhaps or..."
Mrs Janet Ward said, "My daughter loved those chickens when we had them, and I bet she can still tell you all about chickens too, Reverend. It might even be a way to get her to come back to church."
"What a good idea," he said. "Good good. Well that's a good thought. Rather your daughter than you, then, Peter."
"Call round to her," then, said Mr Peter Ward, turning to see his wife looking straight at him. "Yes, you see her. I'm sure she could be pleased to help."
"She'll be pleased to see you," said Mrs Ida Cartwright, 81.
"Good good. Then, then I'll go and, yep, have a word. Have a word and see what happens."

So it was that Mr Johnny Levrithe, 35, the milkman, came to the vicarage each day, with wood and materials, and tools, and an extension cable for electricity, to build a large compound for at least twenty chickens and a proud cockerel. And many a day along came Mrs Janice Capron to help, especially as she had been given a house key for when the Rev. Alan Peart was out, and sometimes both of them were there but no one was in the garden.
And so the day came when indeed twenty hens were introduced by Johnny Levrithe and Janice Capron to their new home, and a cockerel, and so yet one more cockadoodle-doo could be heard in the town at daybreak. That and the ringing of the church bells every waking hour.

It was Sunday morning, before dawn, and Janice Capron sat up in bed and took a call on her mobile phone from her husband. He would be home later that day; his dentists' conference had gone well and hoped he would not be over the limit driving home from about midday.
"I knew he was a dentist before he told me," she said.
"Oh, how come?" asked Alan Peart, coming back into the world of the awake and screwing his eyes.
"Because when we first made love I never felt a thing."
She said she would dress up and nip out to let the chickens come out of their large hutch and into their new compound for the day. He said he would get up too, for the eight o'clock service was not far off.
She was soon back and speaking to him into the shower cubicle: "The cockerel, the rooster, isn't there. He is missing. Some people might be wondering if I, you, we, have been looking after all the chickens well enough."
This played on his mind a little, and he said nothing after the eight o'clock communion, but decided to speak after the 10 am parish communion. Janice herself had looked about the streets but only on a direct route back to her house.
"Well, em, everyone," said Reverend Peart; "those of you who have been to the vicarage will have noticed the new compound and hutches for my new chickens. I was, well, very pleased to give work to people in the parish to do this - Johnny Levrithe for his skill, and Janice Capron was recommended by her mum and dad here to look after them and to tell me how to look after them. She is quite an expert, I can say."
"In quite a few things, I hear," said Mrs Ida Cartwright.
"But unfortunately I have to ask you, today, has anyone seen a cock?"
Everyone put their hands up.
"What, all of you?" he asked. "You don't all keep chickens now do you? Has there been a run on chickens? No, well, I mean has anyone seen a cock not belonging to them?"
Some women raised their hands slowly.
"When was this?" he asked.
"About five years ago, vicar," muttered Mrs Eva Carter, 64.
"Well it obviously wasn't my cock then," said Reverend Peart. "Of course I meant has anyone seen a cock recently."
Some of the younger women and most of the thinner men raised their hands.
"For goodness sake! I mean, has anyone seen my cock recently - the one Janice Capron was looking after?"
From opposite choirstalls, Miss Carolyn Matthews, 28, and Miss Janet String, 35, raised their hands slowly and both started to stare at one another. Reverend Peart had to turn around to see them as their hands slowly went down.
"Oh I don't know; where is my cock?"
"It's there, it's there," some people were saying, and all the congregation seemed to be pointing at him. He went red - but then, from around the high altar table came the cluck cluck of a proud cock, that must have been in the vestry and perhaps behind the large desk some time and must have followed him over the road from the vicarage. Plus he'd opened the little vestry window - enough for a cock to pop in and out.
Later on in the day he called at Janice Capron's and told her he'd let them move about over the garden on the Saturday, and she told him that the compound is big enough not to let them out unless he watches them. A car was heard outside - it was her husband arriving back from the conference. The front door opened and in came her husband, Mr Eugene Capron, 40. So the vicar shook hands with her husband when both were in the lounge.
"What are you doing here?" asked Mr Capron.
"My cock has been going places it shouldn't have been," said Alan Peart. "Janice has told me it should stay in its home and not rove around. Anyway, I'm just going home."
He left, and Janice said, "Helping him with the chickens. His cock was found wandering in the church."
"Ah, what did I say about him?" asked Eugene Capron, passively. "But I had a good time. Amazing new methods in oral technique while keeping people numb - reassuring all our paying patients. You've been all right?"
"I've been fine. Plenty to do with his cock and the hens. He was in a bit of a flap about his cock. Hey, you could try your new method on me as my mouth needs seeing to. It aches a bit at the moment. Could be teeth, or nerves; could be my jaw."
"Well it takes some time to do something different, new, learn the techniques. Good that you keep busy. See if your mouth aches tomorrow. You too warm? He was in a flap? Do you fancy a bit of a flap?"
Posted by Pluralist (Adrian Worsfold) at 04:55