I Was Controversial Then

My article in the 1974 school magazine didn't win me many friends. My parents moved to Sutton when the railway to and from Hornsea closed. It had a village centre and historical layout, but the surrounding farmland was purchased and built upon. 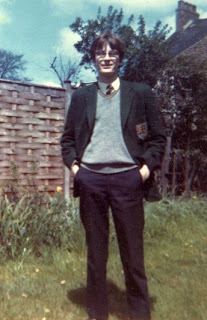 The complaint made then has since been answered: today housing and street patterns do not follow architecture's adventures. Still that is itself boring and tedious.

On the second page taken from the 1974 magazine is my friend's poem. I know it's his from the subject matter, the town mentioned and the slight non-event humour. The signatures are unclear about who did what, but he did the writing. He is the one who beats me at Scrabble.

Below on the third page is text extracted from the 1978 magazine, a much more boring and badly bound black and white production, with references to friends who had left the same time we had and their effect on the competitive chess club.

The .PDF file is 908kb. The image pages were scanned via Irfan View and Optic Pro scanner on my Windows 95 computer and saved as two .bmp files. The text was scanned via Pagis Scanner and Optic Pro to be processed by Textbridge and saved to pure text and Ultimashell Autocompletion helped with the processing of corrections before the text was then formatted in MS Word. I passed the contents over to my Windows XP computer, along with some storage, via CD writing. Then on the Windows XP computer a later Irfan View produced the two page images direct to .PDF files, and these were merged by PDFMerge for Code One. The processed text passed also over, it was displayed in Open Office Writer and checked again and then Open Office Writer exported the text directly to .PDF. I then merged the 1974 image pages with the 1978 text page (I missed a v showing that should have been a y - I later did this part again). The combined result went back to the Windows 95 computer by floppy disk, from where it was uploaded by dial up, along with changes to other web pages and a broken link restored, to my website (and this was done twice too). The website changes are always tested on my Windows XP computer using broadband.
Posted by Pluralist (Adrian Worsfold) at 20:44

Very observant. Looking in the school magazine there is g d b but no explanation.