The story continues from the previous episode with a change of location. The story began in September.

The priest of Blue Velvet, Reverend Alan Peart, 51, was walking with his wife through her parish church graveyard, with his wife Reverend Julia Peart, 45, in the parish town of Norton Velvet. She was looking out for needles and other items dropped and he had joined her, both wearing protective gloves and carrying plastic bags for deposits.
"Look," she said, "a pair of knickers left here by this new grave. It is awful what people do. Oh and that card has gone from the new grave just next to them. So you know what's happened."
"It's the old one. Some take them off and others move them to the side," he said. "Every man who's played the field knows that."
She said, "One woman will have returned home with no knickers, creating suspicion with her man, and the other with her knickers but a card inside saying the men at the Fire Station won't forget you. This graveyard is becoming a public toilet!"
"It will have been a public toilet ever since it existed," said Alan Peart. "Well they say behaviour has declined, but even Darwin looking after village affairs for his absent incumbent compromised with an evangelical when he got the drunks off the village streets. How's business?"
"Sort of religious recession," she replied. 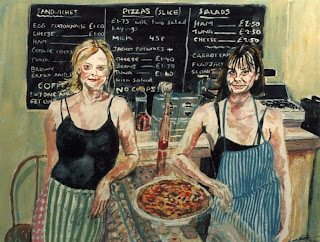 "I met the new bishop," he then mentioned.
"What a creep," she replied.
"He was our friend once. He wasn't a creep then."
"Not mine really, not like you. Though we gave him plenty of pizzas from our evening job."
"I fancied you, and you went out with both of us, but you weren't available to any of us. So I still did you a service. And still do."
"And me you. Nobody wanted to leave theological college even single, especially non-conformists. Coming here, after an extra year, and after transferring denomination," she said. "The old bishop, he was good; he maintained the vacancy to put me near you. But this new one knows too much," she said. "He won't replace me if I move on - they'll join this lot to yours."
"Or mine to this, if I was to go," he said. "He knows far too much."

They walked to her vicarage. Sue Clark's ten year old daughter Tina was in the vicarage sat down having her lunch, saying that this afternoon they will talk about history and the coming of industry and Tina wondered how to explain it.
"Capitalism," said Alan Peart. "Say Julia got the freehold of this place."
"Never. Not now," said Julia.
"Like she owns it. And Sue was just a part time worker. Then it would be like Julia is a property owner and your mum is a worker. So she is the capitalist and your mum is a worker. Does that help you?"
"Yes, Uncle Alan," said Tina, Sue's daughter, "because my friend Hamish said his dad says capitalists screw workers and leave lots of people without jobs like his dad."
The adults looked at each other.
"Eat your egg sandwiches," said Sue. "I think you'd better have an example, like Mr Barnes, your teacher's husband, owning the furniture shop and then you have the workers who carry furniture to people's houses. It's like Mr Barnes is always on top of the furniture, with them making him money."
So Tina chomped at her egg sandwiches, with an apple and mug of tea still to go.
"Do you know what's the reading offhand this Sunday?" asked Reverend Julia of Reverend Alan.
"I do. Joshua 5 and Matthew 11."
"Is there a Bible there on the table, Tina?"
"Yes, Julia."
"You find Matthew 11 for me."
"20 to 30 verses. What does it say?" asked Alan. Julia came closer to look.
"I've got 30," said Tina. "It's about eating egg sandwiches like me. The yoke is easy and 'burden' must be about it easy to swallow."
"No, no, it's not about that, Tina. OK, I know. And what about Joshua 5?" asked Julia. "First part of the book."
"A child who can find books in the Bible!" said Alan Peart.
"Is it about cavemen?" asked Tina once she found a passage that seemed to fit. "Make flint knives and circumcise. What's circumcise?"
"Going round the world," said Sue.
"Cavemen in Egypt," said Tina, chomping. "They must have got to Egypt. Did they eat eggs as well?"
"Men have never asked for directions," said Julia. "That's why they were in the desert for forty years."
Suddenly a seemingly naked man appeared in the kitchen, as if from nowhere. All were in a flap. Julia being nearest covered Tina's eyes and put out a protective hand. Sue was the furthest away and started coming forward. Alan decided to tackle him, as if playing rugby, but was tossed away behind the man as if with a touch of his finger.
However, for all his exposure, Sue realised she could not tell if the man was circumcised or not, indeed his bare feet were joined at the toes.
"Real apologoses shit that," said the man. "Is that sand glass?"
"Would you, you whoever you are, get out of this house?" Julia speaking stated shaking, as Alan got up.
"How the hell did you get in here?" Sue asked.
"How in I got? Escapio time!" He ran off into the hallway and Alan followed him, but he was gone.
Then an equally naked appearing man and woman too appeared out of the lounge. Julia recovered Tina's eyes. "A man about eighty comes about this way?" said the athletic man who again had no individual toes. He went away but the woman, curved and medium breasted, perfectly shaped like all of these arrivals, approached the occupants. "Very apologoses," she said. "It's lovely to see these olden buildings and olden techno. Can I taps the sandglass?"
"Eighty?" asked Alan Peart.
"It's actually new double glazing," said Julia. "Why are you naked?" she asked, still shaking.
"Noes. It's what we need, all we need, warm, dry, always the same. This glass has a moist resisting vacuum has ennee. Wow. What they did do! Is your currency euro coins?"
"Pounds," said Alan, looking at her up and down.
"OK. The archetechnos outside the shop bank. Money coins from there?"
"Yes. Notes. Who are you?" Alan asked. "Who are you all?"
"Give me your hand," she said. "Just touch me." He did, under her breasts, that on closer inspection did have some sort of surfacing on them. "That's enough. Good - you goes to one of those coins archetechnos and put your hand on the top. Bye." She ran off into the hallway, and then as he followed there was no sign of anyone.

Trying to discuss what they had encountered all three went with Tina to her school but via the ATMs. Alan Peart touched the metal with his hand, and immediately the machine produced money to the amount of two hundred pounds. They all looked at each other and took the money.
So the little girl in front of the class told her teacher that she looked in the Bible and found out that cavemen went around the world and ate eggs in Egypt, and stayed there for forty years because the men didn't ask for the way out, that a man and woman with no clothes on who just appeared were chasing a man who also had no clothes on who'd just appeared, and that her sort of vicar uncle touched a cash machine and it gave him £200 without him putting a card in - and he took the money and gave it to her mum. And she said that she was told Julia is a vicar capitalist and is screwing her mum who works hard while the workers carry Mr Barnes on top of his furniture. She said too that her uncle who isn't her uncle had married her mother's friend because their new boss would not marry her. Hearing this the teacher waited until break and took some time to write a note for her parent Sue, to ask her to investigate why her daughter was fantasising so much and saying these strange things to her and in front of all the children.
Posted by Pluralist (Adrian Worsfold) at 05:13