Crumbs! When the ACI and the Liberal Agrees

This is my last blog for a few days, so fittingly it's on the subject that is the running issue even for an outside commentator like me.

Modern Church opposes the Covenant of course and is providing more resources, but what of those who might have supported it but now seem to be luke warm?

One of the interesting developments recently has been how much people of the Modern Church end of the argument agree with the first level interpretation of the facts of the matter with people at the evangelical end. The fact that there is this bizarre coming together, despite the complete disagreement on purposes and the future, suggests that the Covenant as a solution is moribund (but can still be passed, can still be damaging - especially within the Church of England).

I know that the Anglican Communion Institute is a few men, a dog and a website, but then aren't we all? It's rather about the arguments produced. Even I agree with some of the points Philip Turner makes in his Communion on the Verge of a Breakdown: What Then Shall We Do?

Up to a dozen Primates who come from the most populous areas of the Anglican Communion refused to attend. They did so because the Archbishop of Canterbury, ignoring his pledge that there would be "consequences" resulting from the actions of The Episcopal Church (TEC), insisted nonetheless on inviting its Presiding Bishop. 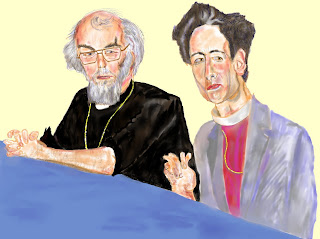 This is right, as far as it goes: that there was a moment of actions mean consequences and now this seems not to be the case. Then there is this:

From an ecclesiological perspective, the meeting itself proved vacuous, producing little more than points gathered on newsprint by a facilitor.

When people discuss at a meeting why they come to the meeting, you know things are going wrong. It is the desperate stage of naval gazing. So it becomes interesting that there can be this sort of agreement. What of this then?

Sadly, as things now stand, the Archbishop of Canterbury has lost his ability to serve as an effective symbol and focus for the unity of Anglicans.

Presumably this is not the case for those who went to the Dublin Primates' Meeting, but it could be for many more across the spectrum. Now Philip Turner regards these present as a 'rump' (it is not so clear cut: some were present who he'd include in his Global South "opposition") but leaves a difficulty that the opposition - those who were not present - is divided, apparently. There are to parties and the first has:

...what I will call a "relational" view of church unity. When disputed matters arise, they favor mechanisms that will help the provinces to "recognize" whether a disputed innovation within a Province is or is not in accord with the witness of Holy Scripture. The other party has a more "confessional" view of communion.

This seems to be factually about right too. In terms of strategy, for him the danger is that:

...they will further divide and in so doing offer no effective alternative to the rump communion over which the Archbishop of Canterbury now presides.

His road to unity (for them) is for the two to do more theology on communion, for at present they are limited to tactical practice:

It appears that the dissidents from both north and south of the equator have decided to play the game on terms set by the liberal leadership of the Instruments. They have rightly resisted the change in moral practice TEC has undertaken, but they have neither exposed the shallow nature of the theology behind these changes nor proposed a more robust alternative.

I wouldn't know about this, because there is plenty of theology to be developed that leads to the inclusion of various classes and types of people in their relationships that evangelicals would exclude. Still, be as that may as a solid disagreement, there is a question to ask in general:

There is the argument for a confederal (and it is not federal - federal means a strong centre!) arrangement of churches that allows for a friendship and relational communion and gives the flexibility for the 'Holy Spirit' to work. Personally I can't comment on that, as I think it is a 'God on our side' argument, but flexibility does allow for innovation and change.

There is, of course, a rich literature on the notion of Communion. The writings of John Zizioulas and Jean Tillard have exerted enormous influence on the ecumenical discussions Anglicans have had with Eastern Orthodox and Roman Catholics.

May be this is so, or not, and is or is not applicable to Anglicans, but again it can be agreed that:

In short, those in dissent have, like their opponents, abandoned theological work and given themselves to political strategies.

So in the end he thinks it is up to the Global South to do the work on Communion, and on the basis of numbers he, a Westerner, is glad to take a back seat.

Where there really is disagreement is the assumption by Philip Turner that this is all there is and this has some permanence.

Rather, it could still be the case that this Primates' Meeting was just the most recent example of the ducking and diving strategy of Rowan Williams: this time trying to get the Western Churches to sign up to his beloved Covenant. He is sort of saying, 'Look, here is an example of relational getting together that does not involve disciplining and restriction!'

Well, we've been in zigzag land before. Next year, or the one after, it could all be very different again: that once again actions have consequences.

There does seem to be very little theology in this at all. The man at the top is the most politicised: he keeps dribbling the ball and people either side seem temporarily impressed or deflated. But if the 'rump' has a memory that can reach to about six months, it might recall its own deflation. The fact that the liberal voice now remains anti-covenant is a testimony to the extent that the boss is no longer trusted, that to keep undermining those who'd once support you is, in the end, to lose them.

This is now happening on the evangelical side. The problem is, the boss might still get the Covenant into the goal mouth, and this is remains the most likely outcome in the Church of England at least. Again, a short memory is needed. The laity in the current General Synod were set up as soon as they walked through the door, so that House will pass it, and the bishops will, so it is only the House of Clergy that might reach a majority the other way and actually sink the thing.

The Covenant process is getting more distrusted and redundant by the day, and yet as a piece of text to act upon could still be quite a disaster, and just look at the recently released Study Guide as to the assumptions behind how it has impact - on every church in the land and believer called Anglican.

Doesn't include me, however, as I am just a Terror Blogger these days on such an issue.
Posted by Pluralist (Adrian Worsfold) at 03:44