Come on, come on: punk blogging is dangerous. Madpriest, Rev. Jonathan Hagger, has received a letter, and looks like it is from an ex-parishioner or someone in his area. 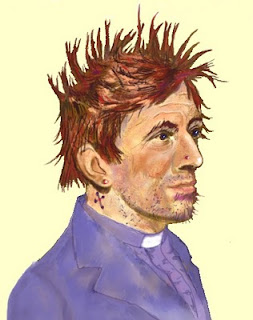 It is extremely nasty, casting aspersions and intending to stick the knife in.

Earlier on Madpriest himself wrote about Christian bloggers being pioneers and rather uncomfortable with what they do.

Here is the problem. Congregations expect their ministers to serve them.

In the Church of England, they expect them also to connect with the parish and do all those duties. They expect propriety, obeying the rules, being within the boundaries and doing the dance. In other credal denominations, there may be a greater focus among the gathered.

In the Unitarians they expect them also to connect with reasonable relevant institutions (like interfaith groups, cultural societies), represent the congregation and other ministers (to some extent) and do some deliberate outreach to get some bums on seats.

Unitarians should give the minister absolute and exclusive space to order and conduct worship. The minister in turn should make that worship pastorally sensitive to who is there, whilst being themselves in that worship. The minister may well delegate and facilitate others to conduct worship, which does then open it out, or, if part time, this further element happens anyway. A Unitarian minister must jealously guard the privilege of designing and conducting worship.

Now I think that if the Unitarian minister has a blog then that blog ought to craft all the kinds of debates within the denomination, and some wider afield. It may well explain the minister's own faith stances. Much will be analytical and much critical. Having a bash at the denomination may well earn brownie points locally, but the minister nevertheless does represent the brand (and the need to improve the brand).

I suggest that the situation in the Church of England and other credal denominations are much more restrictive regarding blogging, especially when it looks like punk blogging.

In the Church of England, a priest is an extension of the person of the bishop. The bishop is the main presbyter, and all the other ordained folk are his extended mobility and tentacles. So the job of the priest and deacon is indeed to be local. Of course they are not clones, but nor do they have the independence expected of, say, a Unitarian minister (and a minister whose risk is dependence on the congregation for his or her living - risky eh?).

It is not a job description, then, for a priest in situ to go blogging to the world. Now it might not matter, because the blog could be a set of photographs of the changing seasons and an online version of 'Down your Way'. It might include the odd sermon, given under normal house rules of 'preaching the Gospel', that took place in church. It might be an exposition of evangelical theology, ancient, modern or postmodern. No problem.

The problem comes when the blog starts criticising the institution, either the Church of England or the Anglican Communion, indeed becomes by repetition relentless in that direction. Who cares what Reverend Fred Blogger thinks? Then we have blogs that spew out theological opinions that seem to be at some variance from the expected official line. If the blog engages with matters to do with sex, again at variance from the official line, well that is asking for trouble. Any combination of these adds to the risk. To do these relentlessly constitutes punk blogging.

Now, of course, the blogger might have freehold, and even if still a bishop's representative a thumb on the nose and waggling of fingers is possible back up the chain. The practicalities of what the bishop can do in such circumstances is rather limited. However, common tenure has come in for new appointments, with different and contractual obligations, and many will still have less that that (if not quite the old priest in charge posting that used to be virtually without protection).

But the blogger may also be looking for a job, or even be an ordinand, and one cannot be surprised if the blogger's reputation has run ahead of that person. If your blog attacks the hierarchy and its policies, has a 'flaky' liberal theology that doesn't quite make the grade, and takes an inclusive even permissive line on sex and relationships, or any of these, then many a congregation is going to be rather wary of this person as secure and sure. The candidate needs to find a particular congregation that is in tune with things expressed, or at least couldn't care less, or is just desperate to fill the post after a long period without a settled minister.

An ordinand might not even make it to ordination; the hierarchs apply the brakes when the blog has created alarmist reactions in the bureaucracy. This could be in the Church of England, among Lutherans, with Methodists: in all sorts of such denominations. For example, if this Methodist were an ordinand or a candidate for a ministry, who would employ him? - and yet the postings are all very valid.

Otherwise such a blog becomes a reason in the end to get out (that is, either change denomination or become independent, or be in a half-way house of effective independence attached to a Church).

Now where a blog is crucial is where it is your identity, and part of your ministerial outreach, and this is for those priests who go it alone or join one of those looser membership Churches where they still have to self-subsist. The leading Queer theologian of the UK doesn't need a blog herself but she is the Archbishop of the Liberal Catholic Church International. That's the tiny group with links to Old Catholicism and broke away in a liberal direction and still has a faint smell of Theosophy about it. There is also the Liberal Catholic Apostolic Church, and they are a now reaffirmed liberal grouping with both trinitarian and Unitarian origins (a semi-detached Unitarian minister was involved in its pre-origins, and that background is reaffirmed). I am on its mailing list. The LCCI has a very light touch regarding affirmations and promises for ordained ministers and I gather that the LCAC has none. To be a little more orthodox, but with space to breathe, and still completely socially inclusive, there is the Open Episcopal Church. All these Churches and more retain valid Catholic ordinations and the threefold ministry. They get their liberalism not from the Protestant Reformation but from a broad view of incarnation and, in some cases, syncretism (LCAC claims Francis David - Ferenc Dávid - as a reference point but that's more than pushing it).

But anyone operating in those groups is effectively independent, because they have to live by either doing enough ministry (plenty of funerals and all sorts of negotiated weddings) or by having a second job. Madpriest is trying to do it via a website, but this is very difficult, and also I would say that his attachment to the Church of England is something he should consider dropping: it spat him out so reciprocate. It will hold him back from conducting a website ministry. Nothing is stopping him from being a priest and plying his trade, so to speak. The other Jonathan (Blake) managed it, and went to court and won over those who disparaged his ordination.

If you want to stand out by blogging to the world, then you may well have to pay the price. That price is independence, or at least being prepared to be more mobile than most to find some odd corner that will absorb you. If you are on the edge, don't be surprised if your blog pushes you off. Punk rockers have a habit of falling off the stage, and this may be so with punk bloggers.
Posted by Pluralist (Adrian Worsfold) at 20:04

Once a punk-blogger leaves his or her denomination he or she is no longer a punk-blogger. Such bloggers then become commentators, like yourself. I took the decision after only two months of starting my blog to stop being anonymous. Anybody (or any mouse) can attack authority from behind a pseudonym and they might gain a loyal readership. But signing your name to criticism given makes such criticism costly and valid or, as John Henry would put it, "real."

I'm not a punk blogger as regards the Church of England - quite so - but I am potentially as regards the Unitarians. I could though be regarded as a 'terrorist blogger' as regards upsetting individuals who do blog when I come in with my not so welcome comments.

Exactly. We each find our own role.

Interesting. I came here via a link to MadPriest's site. I had to leave a comment because I blog - though not I think terribly controversially, though I do blog about my mental health & the interplay with faith, and I am quite liberal - but I am also thinking about serving the CofE in the ordained ministry. I do not wish to be turned down!