Rachel Marszalek carries on with her marriage discussion, and therefore so do I. For the life of me I cannot comment on her blog (nor on the Changing Attitude one for that matter - both require selecting a profile and no matter what I do the comment is lost). 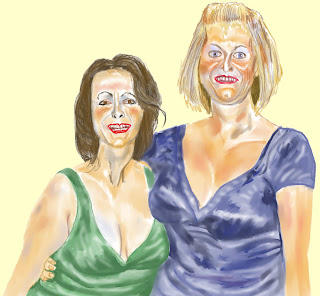 So I have to add comment at the Facebook notification end of things and on that basis these comments were made based on her blog entry and use made of this article recommended by 'ex-gay' Conservative Evangelical, Rev. Peter Ould.

Adrian John Worsfold: Full of assumptions: the article is ignorant about marriage and family in the world, and bodily contact forms a union of two for the sexualities, not only for opposites. The article you use is nonsense.

Rachel Marszalek: I think it is intelligent. The points it makes about the sexual act make sense. By the very designs of our bodies and the consequences of 'right' sex - children ultimately...

It goes on to explore however that children are not the requirement. Some people choose not/ can not have children. That's fine.

Union is different for those who are not opposites, it is not 'one flesh union' - our very anatomies are designed to complement one another.

Adrian John Worsfold: Discuss how our anatomies are so designed regarding say oral sex. Sexual expression is not about plugs and sockets.

Rachel Marszalek: I was not saying that it is about plugs and sockets. It is just that same gender bodies do not fit together. "Discuss how our anatomies are so designed regarding say oral sex-" I reckon you can work that one out.

I want to pick up on By the very designs of our bodies and the consequences of 'right' sex and also our very anatomies are designed to complement one another.

These are statements, are they not, about plumbing. Natural sex follows the design of our bodies and our very anatomies are designed to complement one another. Given that we are not jigsaw pieces, male and female, other than with some of the plumbing, then this 'argument from design' is clearly about plugs and sockets - the plug delivers the sperm and the socket receives it.

The problem here is that is all they actually do.

It is rather like people confuse child making and rearing, couples and families. There are societies, for example, where groups of women in the village bring up children. The men are uninvolved. The young fertile women are available, the men come back from their trips away, have sex, and lose all interest in any of them or the child rearing. The fathers are collective. Other places have one men to many women in marriages, and some mountainous regions of low resources have many men married to one woman in marriages (it keeps the population down - one man always goes to the monastery).

So it is just as legitimate for men to raise children together or women to do so, and in various arrangements, from any 'natural' point of view. There is no natural point of view.

Now the female clitoris is a protrusion from the body, and is stimulated by action upon it or its hood, and one of the best ways is with the tongue. Indeed, the more it is stimulated, the more it protrudes from its hood. Now I guess that male or female can be equally as good at this. Indeed women engaging in a kind of scissor actions are very good at mutual and direct stimulation. Of course there is a G spot inside the female, but then there is equivalent stimulation inside the male anus, put the male penis alone is very inefficient at stimulating that area as well as stimulating the clitoris. Now some people think, yukky, when it comes to the male anus, but then the female vulva shares the removal of urine close to the 'tube' for insertion of a penis for reproduction. The issue then is being safe and separating out the actions. Again there is no natural plumbing for the stimulation of breasts, as they are biologically for feeding. The penis can be stimulated in many ways, and one of the best ways is inside someone's mouth. It might just be after all that one wants to lie together and stroke or lick other areas of skin, or stroke one's hair - and there is nothing of plumbing in that regarding opposites.

So, when you actually look at the pipework and the different actions, you soon realise that very little is concerned with what is 'natural' at all. For what it is worth, you can reproduce using a syringe, which isn't very 'loving' but even that can be the insignificant bit of all that surrounds the event. As for who is the father, or indeed who is the mother, I refer back to the varieties of families and thus the delivery of sperm and the availability of the egg is the part of reproducing, but sexual expression and society is rather more complex.

We think that pair bonding assists social stability in our kind of individualistic and partly collective societies. In so much as it does, we should then have these symbolised (we communicate into society) and this involves blessings of couples gay and straight quite equally as married or partnered.

(By the way, Rachel is married to a man and I am separated from a woman.)
Posted by Pluralist (Adrian Worsfold) at 16:42

I do not feel embarrassed. Perhaps I can learn how to communicate better, that's probably certain. I am not embarrassed about thinking marriage is between a woman and a man. Can any amount of reading persuade me otherwise?

Rachel
you could try.
You won't know until you try.

Tobias Haller, Reasonable and Holy.
The book was written based on a series of essays you can also find on his website http://jintoku.blogspot.com/


If he's wrong, it would be fascinating to have proper conversation about where and why.
So far, not a single person has succeeded to demolish a single one of his arguments (long comment threads at the end of each essay).

If you have genuine respect of Scripture you should be open to someone opening your eyes to where we have previously got it wrong.

"I am not embarrassed about thinking marriage is between a woman and a man," Rachel said obdurately.

“When I use a word,” Humpty Dumpty said, in a rather a scornful tone, “it means just what I choose it to mean—neither more nor less.”

Words don't have meanings, they have uses. The Roman Catholic Church would deny marriage to divorced persons, but elsewhere, usage has moved on. Marriage used to mean an exchange of property between families (a bride for a dowry). It now refers to contracts between equals. Perhaps Rachel prefers the older practice.

As Adrian details, the argument from nature has failed, as it has been noted that homosexual practice is common amongst vertebrates. Some same-sex pairs of birds will raise chicks, given the chance. And observers have commented that most giraffes are gay. Paul was off in his premise that the purposes of God could be clearly seen in nature, and he was wrong in the illustration that he offered of the principle.

I'm glad that Adrian pointed out that the male has a major organ of sexual pleasure just inside the anus. Evidently the parts do fit together. But that's a mere fact, which has nothing to do with a deep religious conviction.

Rachel seems proud of her ignorance. She says she has been thinking about marriage but her writing undermines that claim.

She smuggles value-laden terms, such as marriage having a natural origin or purpose and gender complementarity, into a discussion which ought to be based on facts. The fact is, marriage, both civil and religious, is not an ahistorical, transcultural reality. I wish she had read some anthropoloogy.

If she wants to biologize everything, then she would have to admit the argument of misogynists that women cannot be authority figures because they lack an appendage (as if men succeed in that role!!!) Interesting that she falls into a rhetoric that echoes that of little boys obsessed with genitalia, as if she has swallowed the discourse of the oppressors.

There's thinking and thinking. I can think quietly among myself and come to very pleasing conclusions.

And then there's genuinely engaging with the depth and serious thoughts other people have, being prepared to genuinely think things through from unexpected perspectives and engaging in unfamiliar and challenging arguments.

In an ever changing public dialogue it's the latter that informs shifts in opinion and awareness and the former that eventually seems embarrassing.

This is NOT about the conclusion one comes to but about the process of coming to conclusions.

Since many animals do engage in same-sex encounters it's highly likely that there were also same-sex acts in early humans and pre-humans. Since somewhere back in time this would pre-date religion in humans, that makes it more natural than any religious proscriptions on same-sex acts. More natural than religion.