What Happens to a Deconvert?

Not everyone who does theological reading ends up being a deconvert. If they did, there'd be few clergy left for one thing. Nevertheless, there are casualties of discovering belief isn't quite like you once thought, and these folks need to adjust.

I have a Facebook friend, whom I have never met, with whom I once discussed religious matters on a discussion board. He was then a theist, a Christian, and well read enough. He promoted a liberal Christianity like me, though mine was more towards religious humanism. He is also gay. All the time we discussed, he was the realist and I was the non-realist in religion. Now he is a secular humanist. He misses church worship at times, but came to the conclusion that the Church and the religion itself is unethical. Whatever belief he had has gone. I've ended up the more religious; it might be said that I'm the more persistent. On the other hand, perhaps we are a couple of agnostics, one without and one with religious practice.

What happens to deconverts depends on a number of factors, but two essential short term reactive responses are psychological and institutionally based.

The fact is that some deconverts are scared and lost, and feel like they are looking into a black hole. All that there was that held them together has gone. The psychology of this loss is so strong that they hit a rebound, and some become almost impossible fundamentalists. Doubt that had invaded them, and stripped them, leaves them in a kind of personal danger, and a point comes where doubt - all doubt - is the enemy. They put on a highly rigid armour, and fight. Such a person may be conservative in other areas of opinion, for example in politics or in attitudes towards the family and so on. To become doubtful in religion is to have a gap of inconsistency that just needs to be filled, and also concreted over and you even lash out.

A variant of this is the the Catholic one, where, although the doubts had taken over regarding all the theology, there is still the tradition and the clothing provided by the Church. At first the reactions are pretty much as with the new-born fundy, as the Church is promoted lock, stock and barrel, but the dressing up and the 'authority of the Church' can allow for a slow mellowing over a long time. Such a person may become all dressed up and quite a liberal Catholic, once the clothing and the spirituality etc. is well bedded in.

Both of these are psychological. But then there is another response, which is the institutional. It is the 'What am I going to do now?' question, and that needs some pretty rapid affirmations, particularly in public. The importance of leadership, of showing all the right faces, takes over, and no matter what is read in private, the public performance remains the same. For such people, there will be friends who know otherwise, with whom there is plenty in the way of dismissals, jokes and the rest. But the outward is performance, rather like the postliberal theology which has itself as 'identity' and 'standards of role performance'. Some justify this simply by saying they are representatives of the Church. But why are they representatives of the Church if in private they think something else? Such folks might be attracted to Catholic or Protestant forms; again, the Catholic allows more outer show.

If deconversion happens to a serving minister, the institutional and personal necessity of keeping going (especially if receiving a stipend) will produce a long performance 'as if' for quite a long time. It becomes a surprise to many others when the person gets out for another job or, free of obligations, drops the public act. The sense of ministering may remain important; it's just that the once regulative beliefs have gone. In some cases, like for academic appointments, you can just carry on: Michael Goulder is the celebrated case of a person who deconverted, handed in his collar (so to speak) and carried on teaching the New Testament. Bart Ehrman is a present day New Testament scholar who has also deconverted recently.

For some people, of course, that is it. The beliefs are dropped and the matter is rested. Yet after a long time - many years and even decades - they remember their own theistic childhood and there are ways in to belief. It won't be the same belief as they once had, but it starts to build up. Perhaps one reason is they connect with people and go churchgoing again. It can be via the arts, or perhaps a series of passage of life experiences like the death of someone close.

Some people, but few really, change denomination or religion. I remember corresponding with a one time book reviews editor of Faith and Freedom. She was a liberal Christian who became a Buddhist. She acquired all the Buddhist language and this made sense to her after the Christianity had died a death.

She needed an orthopraxy that had replaced the dead orthodoxy. I wonder if John Hick the theologian can be called a deconvert: I don't think so, in that he just evolved his theology towards an interfaith theism and this involved deliberative change rather than loss.

Others become Quakers and Unitarians. My late spiritual mentor in the late 1980s was an Anglo-Catholic priest (ordained at St. Pauls) who had become a Unitarian minister. One Sunday he presided at the Eucharist, said all the right things, and preached the Gospel as required, but told the congregation that he had now resigned. The next weekend he started as a Unitarian minister and he was a religious humanist. I note that Graham Shaw and Don Cupitt now have gone the Quaker way. Some might become Liberal Catholics in the esoteric tradition sense, those whose ancestors bumped into Theosophy (the problem there being some views of the Eucharist are almost magical - and such hardly suits a deconvert).

And there are some folks who, despite having the faith of a deconvert (and it is faith) continue in 'orthodox' Churches and do so with intention. 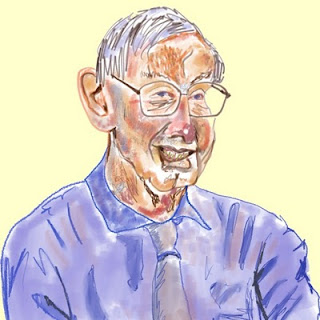 David Paterson is one who puts himself about a bit. Another Facebook friend of mine was ordained recently into the Open Episcopal Church, which is broad and liberal (but more socially and ethically - it still follows the Nicene Creed as such). This is quite an act of faith, to get ordained, and indicates the vitality of something that becomes a faith-path. Christianity here ceases to be an orthodoxy of beliefs and becomes a kind of spirituality dharma or orthopraxy. This is not as such a conservative postmodern bubble, like John Milbank's make-believe Platonist Radical Orthodoxy, but simply a means of spirituality and ministering. Oh and I have a friend who carries on serving and reading in church, and for whom none of it matters at all, and it is all water off a duck's back (by her own telling).

Most of all, though, a deconvert who has given up just stays that way. Life is busy and has plenty to occupy oneself. They are not strange people like me, chewing over the fat forever. However, most people who do leave active religion do not leave for belief reasons. They move away or have a social dispute, and walk off. After walking off the religion they observe is found not to have quite the pull that was assumed and it degrades. These folks are, as such, deconverts after the event.

So there we are: the deconvert violently reacts back for psychological or institutional reasons, or it rests but then creeps back slowly (and then more decisively with the right social connections or a decision to go into a church), but a few change religion or denomination, or carry on deliberately with a change of perspective, while others deconvert after leaving a religious practice.
Posted by Pluralist (Adrian Worsfold) at 04:14

Hello again, Adrian--Thanks for this very interesting series of posts. You have described my situation perfectly--deconverted, struggling for some sense of religious integrity, keeping up a few liturgical connections and, in moments of honest examination (or despair), admitting that it all amounts to nothing or maybe worse than nothing, deception and error. So, I'm sure you've thought about this, I ask the question--is not the whole process a pathology that needs to be overcome and moved beyond? Yes, there's the attraction, the remembering, the positive things, but here and now, as it is, is the whole thing a pathology and if not, why not? Thanks again. It really was a gift to come across these posts this Sunday morning here in the USA. Fred Slimp, Seattle

It depends. If the religious activity is just a memory, something you can't let go, something that goes round and round in circles, then it is better if dropped. If though it is still a means to search and find meaning, then carry on. It just depends on how appropriate is the language, really. Nothing will be perfect, there's plenty of allegory, but if the language is more miss than hit then also it's better to move on. Otherwise it is useful and use it.