This was my effort at a poster using Microsoft Publisher (after more than a decade of not touching it), made while at Great Hucklow (and thanks Louise for telling me about the online means to make it a .PDF and emailing it to my computer).

It is a spoof, as if the Anglican Communion Covenant has been passed and then a load of liberal ministers of the Church of England wish to come out and carry on but in a denomination actually based on diversity, reason, freedom and tolerance in social and theological terms. Some information displayed is just wrong: the Unitarian Headquarters is not found at Great Hucklow, for example. 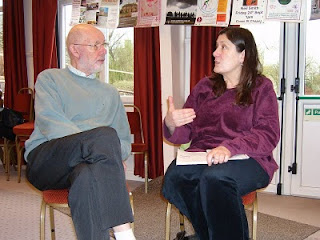 The serious point is that the Covenant will force the Church of England in particular to self-restrict its own diversity given its international role.

Also arguments made against the Covenant often seem to be proto-Unitarian arguments, that is not unitarian (small u) theology but Unitarian in terms of Bishop Francis David's motto: You do not have to think alike to love alike. And Francis David was a Roman Catholic, then Lutheran, then Calvinist, then Unitarian.

Do Unitarians grow their own? Not much these days. Rev. Bob Wightman (ex-Congregationalist minister) and I were saying no in our pub and other chats. Unitarians come from other denominations: people interested in our churches usually come through their doors having been elsewhere. Unitarians have also taken in denominational sectors - e.g. English Presbyterians (of course), Unitarian Baptists, Cookite Methodists, and then Lindsey and Disney themselves were Anglicans.
Posted by Pluralist (Adrian Worsfold) at 06:00