I wrote a sermon rapidly on Sunday, in one go and since then I've edited it only briefly and won't change it further. I can say easily that it is unlike any sermon you'll hear in a usual church and I doubt if any sermon like it is given in a Unitarian church either. But if follows Bill Darlison's recent advice after Ralph Waldo Emerson of "life passed through the fires of thought".

If I keep all the hymns selected, there'll be five. Four have instant choirs - they are from CDs with a Unitarian choir singing. The other I wrote across myself, and can show that otherwise one available tune is too high, and another has the wrong meter (or you'd have to know where to put the words in order to use it). T 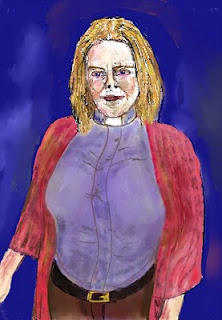 hat'd be a nice diversion from the service as well as using the hymn with the right words. I used an old hymn for words after the chalice lighting, and old hymns can be liturgical too.

I should choose a meditation piece, but I've always fancied playing the punk version of Jerusalem too by Suzi Pinns. As I usually do the music, there ought to be some, and this is my choice. If we have the 'Lord's Prayer' at all, then I fancy Rick Wakeman's from the original The Gospels. Just listen.

I wanted, though it is proving difficult, to use the book our Muslim attender bought me - some words by Ali (the founder of Shia Islam). She's now left Hull for Iran or Dubai if she takes up that job, but it adds a human touch. Maybe that'll do as enough reading. Not sure, but I might pick some short scientific piece as well: the thought element related to my sermon. There's enough on my shelves.

As well as that I'll do a pattern of prayers and meditations using sorry, must do better, thanks and what and who to think about. Ali advises: "When you lead a congregational prayer it should be neither too long to be tiresome nor too short that you may lose some parts of it."

That's how to plan a service. There's well enough there. Chuck the ingredients in a pot and stir.
Posted by Pluralist (Adrian Worsfold) at 05:28