Who Can Fill the Vacancy?

It is no secret that the Hull Unitarian church is looking for a minister, and that there is bizarrely a shortage of ministers or those who have completed training to take up the post. The church has the finance (indeed has recently received more) for this move forward.

A long time ago I used to listen to sermons which claimed an enormous breadth of belief within the Unitarians because of its non-credal basis, and I used to think this was ridiculous because it sits within a certain place in the sociology of institutional religion. Plus there is a Unitarian subculture that develops and produces forms of argument within the denomination.

So although a minister is never asked what beliefs he or she may have (and it does not discriminate on the basis of sex or sexuality) there is effectively a more or less contained range of beliefs. So much of this is relational and based on what is beyond.

Let's say the mainstream breaks down into conversionist beliefs of fundamentalist, evangelical and charismatic kinds, and then there are traditionalisms (at least one per denomination) that include traditional Protestant and traditional Catholic. Now if we say the first three are by approved persons deciding on interpretations, usually about the Bible and discipline about its use, then the second form is much more about the institution and the sacred. But so is the third form, the bureaucratic, where individuals are important but so long as they occupy their proper place and as such function for the benefit of the organisation (this is, by the way, how to best understand the Anglican Covenant). So what you get then is a kind of negotiation throughout the denomination, and partly with the outside and even Erastianism. The upshot is more moderate, but held, theologies upholding incarnation and resurrection, with reference out to science and other philosophies, and an adoption of more, protective, liturgical symbols without necessarily the equivalent theology (as in liberal Catholicism).

Currently there is more emphasis on boundary drawing and being inward looking, with a reaction against the New Atheists and sexualities from outside. The result is a shift from bureaucratic liberal orthodoxy towards an increasingly institutional evangelical. Traditionalist Catholicism is becoming a Roman and Eastern Orthodox preserve.

At the same time postmodernism amongst the liturgical conservativism produces inverted versions of the above. Radical Orthodoxy is traditionalism in a platonic bubble without objective foundation, and there is a performance related evangelicalism of the text, again with leading figures to stop such being individualistic even if it includes the individualism you get in capitalist ideology. Some of these inverted theologies that maintain orthodoxy are very sophisticated and hardly communicable to the ordinary woman in the pew (although a few get it).

However, the educated specialists of liberal subjectivity and open postmodernism form a theological heterodoxy, a group of people who after training and education and teaching are pretty scientific, social scientific, secular and open ended with their various theologies. They tend to undermine the Church as a sacred inheritance or a stable bureaucracy (the rationality of purple or the presbyteries) because they take on authority to their own publications - and now, even, blogs. We might call these systemic, if they are absorbed and productive: though they might also be regarded as anti-systemic if the Church is becoming more sectarian, sacred and authoritarian by bureaucracy.

Some of these heterodox individuals are in quite a bind: even off the scale regarding the boundaries of belief but still in love with the culture and conditions of the Church they are in. 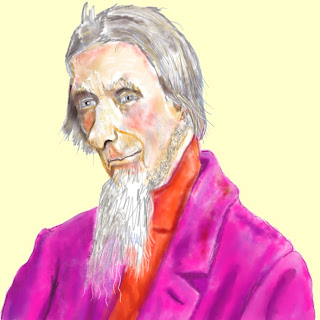 We have seen this recently with the sexuality debate: progressives who wonder whether they should seek ordination in the Church of England and yet some of its individualists under threat still advise them to join up, even as some kind of ballast of defence and towards 'progressive results one day'.

But imagine there is no belief written out, except elsewhere (and rejected), and imagine there is no authority to keep, except what is elsewhere (and rejected). Who is going to populate a 'human relations' type group like this? Such a group is indeed the Unitarian grouping. The answer is the individuals who are like those in the systemic group above, those individualists and heterodox types, and seen as incomplete (as regards the rest in their Churches).

So if a minister where to come to a Unitarian church and start to go in about the saving power of Jesus, it won't be long before such a minister would cheese off the congregation. If God is regularly intervening in history, it will be puzzling to a group who, by and large, reckons that if there is a God it isn't that sort.

It can be that a minister might believe in the incarnation and resurrection, and might believe in Jesus being the first born of creation (classical Arianism), or that Jesus has actual divinity but less divinity than the Father (Reformation Arianism). Indeed I knew of one who thought the Trinity was about right, but who couldn't accept credal details. I never understand why they cannot do what many an Anglican does with the creeds, and that is just ignore the details - if you can more or less hold the scheme together, the details don't matter (they just get debated endlessly and pointlessly - and disagreement is put into shadow or the usual show of duplicity).

All this is not the main bulk of Unitarianism now. Some of it, much of it, retains voluntarily a kind of Christian culture of sorts: by performance, by some prayers, by some hymns, by the demands of architecture even. Most extend beyond that and the direction is a bottom-up 'common sense' religious humanism. It is not very intellectual. Most Unitarianism is pitched around a middle secondary school RE lesson for its level. Most sermons are reflections and there is very little of the supernatural at all, so the liturgical element still drags behind the actual meaning involved.

So a prospective minister ought to be in this ball-park at least. Beyond this you get the extra doses and flavours of greater rationality, of the irrational-spiritual (to make it opposite), and of the different faiths especially from the East, and then the neo-Pagan. There is a sort of territory to explore, and most ministers will explore these territories.

A Unitarian minister then should be something of a shaman, that is who goes out into new territories and investigates (and reports back on) new ideas and spiritual claims, across the liberal-Christian religious-humanist Eastern and neo-Pagan fields. For some, this will be a frequent adventure and may result in a resettlement (a minister who becomes, basically, say, Buddhist in outlook) and then has outings from the new base. Others may stay roughly in the Christian-humanist area with much less obvious pluralism.

Over the years a Unitarian minister will change beliefs and will change style, and this can contribute to changing the local church itself.

This should all be reflected in the services, and a minister must guard jealously the right (and duty) to give these services as he or she decides. Pastoral sensitivity is a duty too, and relating to the group, but a minister is expected to be an autonomous individual.

Beyond this comes the immediate pastoral work, some administration, and making those contacts outside that is to build the congregation (the congregation should be kept 'open' to the outside too). The stress is on a unity that involves difference.

So if any minister is fed up with making promises about beliefs that they don't actually hold, and is stale from liturgical repetition, as well as frustrated by the person-hierarchy that imposes from above, plus the deception generated by the conformist expectations from below, they might consider the vary rare move which is to change denomination.

Very few do, and the reason is because size matters, because the devil you know is better than the one you don't, because of the guilt that you 'should' believe what you don't, in that the conditions of service are like nurse and soft blankets, and because few people mentally can cut the rope. Remember too that in nature the 'parasite' actually wants to be on the host body - it is the host that has to remove the parasite.

It is cold out there and there are few guarantees, though bizarrely one of them seems to be enough money.

Any active minister would be employed but would have plenty of time to do some Unitarian ethos and history courses for a year that would probably be required at denominational level at least.

The picture is of Francis William Newman: he was an evangelical Anglican who had some frightening encounters during foreign mission; back home he went in a liberal direction even via full baptism and ended up being a high up Unitarian, the leading and pioneering English Vegetarian, and a pure theist who preached against the moral superiority of Jesus of Nazareth - something I can do more than a century later within the Unitarians without controversy.
Posted by Pluralist (Adrian Worsfold) at 03:11

You argue that a minister should be an autonomous individual ; the problem is that he is also an employee and the congregation that employs him will have certain expectations of him, whatever they may declare publicly about his freedom to preach as he thinks fit.A classic liberal Christian will not satisfy a gathering that is basically humanist; a religious humanist will not satisfy a gathering that is mostly liberal Christian. Some ministers may be able to articulate a message that comprehends these diverse strands perhaps at the cost of the integrity of their own views; just as much a danger among Unitarian ministers as it is among liberal Anglicans,in my view. This year's GA president has stated that the denomination is 'probably too diverse';this may well be one factor in its decline over recent years.Your comparison of Unitarian worship with a middle range secondary RE class is apposite ; RE is supposed to be non-confessional in tone and delivery but a religious fellowship needs to offer something more than dispassionate exposition of religious alternatives if it is to expand beyond its core membership.

I think there is a danger that a minister can bend too far against themselves; but there are churches (like mine) where there is a spread of people and they're all entitled to the minister's ear and mouth.

The GA President was expressing the need for difference and a unique selling point - not just another church. He was quite robust I thought, when he was at Wakefield.

As for expanding, that can be via an ethical focus with theological diversity, that the claim being difference and space to change within one meeting place. This is how I see difference from other Churches, and difference within.