Physics: What if Lesley Went to the Toilet?

This is my theory regarding the establishing of a parallel universe.

First of all, it combines the conscious, subjective and objective: rather like a rainbow exists but every person sees a different one (the sunlight refracting in raindrops coming into one set of eyes).

A parallel universe is formed when an event involves a fork in the road, so to speak; it can form because we know that a photon particle can, unobserved at that point, split and go through both slits and thus two splits form three lines of arrival on a wall, not two. Observe the slit area and only two lines will form. So observation is critical. Furthermore we also have Schrodinger's cat that is in a sense both alive and dead until the lid comes off. 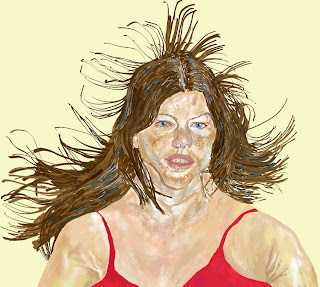 We might say that at the random point of death the creature in another universe is still alive.

Now I posit it is not enough to have a simple event change to form a parallel universe. Suppose a certain Rev. Lesley Fellows chooses to go to the toilet and as a result the local village tramp doesn't get his bun and cup of tea at the door. You might say that in a parallel universe she waited before going, he got his bun and cup of tea and events are different. Suppose, however, that the tramp then knocks at the Methodist manse, gets his tea and a bun, and ends up roughly in the same place at the same time inconsequentially. Not affecting the times of the weekly shop, the potentially split universes have come back together.

On the other hand, back in 1989 a parallel universe formed where my Principal preached caution to me and I subsequently became a Unitarian minister, the result of which followed in a difference to a congregation or two and changes due to my eagerness for publicity.

So here is another point then, that a parallel universe is necessarily a divergent universe. Now, supposing it forms at the 11th dimension (we know four) and initially it is but as little as a sixteenth of an inch away, but eventually it moves yards, even miles away. There are a number of universes that formed where a combination of decisions made meant that the Battle of Britain was lost and the Nazis invaded. There have since been millions of parallel universes come from those.

Incidentally you can go back in time but not backwards in time (increasing entropy law forbids that). If you go back in time and kill your own grandmother, you most certainly have formed a parallel and subsequently a diverging universe.

But I also want to introduce the notion of a consolidation universe. This is where a parallel universe did form a long time ago but environmental forces (of all kinds of environments) produce similarities.

Some people say that given the billions of inhabitable planets across the universe, some planets will have people and situations just like us and doing roughly what we do. Yes, but that is in this universe.

In a consolidation universe characters appear with different names doing similar things, making a still recognisable world, although obviously divergent in several respects. It is already a divergent universe by its nature.

I'm talking about the history of this life, our experiences and consequences. Then it is on this basis that, perhaps due to a significant fork in the road in say 1922 that we end up with characters like Lesley Bloke and Adam Tilgate, Rachel Marsovenus and Jade Stowaway, and Harry Tickpaper, and even Radio Chadderbox itself around the River Humber. I'm just mentioning this as an explanation ahead of the next and probable final outing (in some days I suspect, unless I go mad) of Radio Chadderbox on this blog.
Posted by Pluralist (Adrian Worsfold) at 14:49

ok that got my attention :)

Haven't you been following the story? What about that sermon, what about the visits to Wykkyfish?

Of course, there is always another parallel universe to that consolidated universe.

I've already agreed to Rachel singing in the toilet.

I've thought of how I could introduce this request.

I haven't written anything yet. It is simply forming in my head.