Let's join in with Rachel Marszalek's ongoing college-sourced debate, with my own take on things. 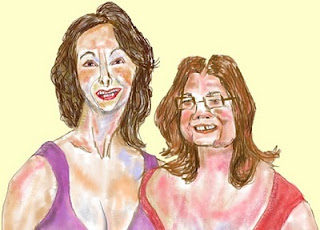 Pluralism, it seems to me, is largely misunderstood. John Hick is taken as an example of a pluralist, but whilst he accepts the plurality of religious he joins them all up as pointers to:

...such terms as the Ultimate, Ultimate Reality, Absolute Reality, the Real, the Transcendent, , the Divine, the Holy, the Eternal, the Infinite - with or without capitals. (Hick, J., 2004, The Fifth Dimension: An Exploration of the Spiritual Realm, Oxford: Oneworld, 9)

For him the Real is favoured as being "closest to the Sanskrit sat and the Arabic al-Haqq" (Hick, 2004, 9), whilst accepting that language is inadequate. Human consciousness led to forms such as the Trinity, Adonai, Allah rahman rahim, Vishnu and Shiva, and Dharma or Nirvana (Hindu, Taoist and Buddhist) (2004, 10).

It is plural and it is a form of theological unitarianism (the highest is the ineffable real, the transcendent) under which everything set out is but a human construction.

A Hindu might well agree with Hick, pointing to Brahman, but a Christian trinitarian would not, nor a Muslim (for whom Allah has 99 names but Allah is quite sufficient, thank you), nor a Buddhist for whom there is no equivalent Real transcendent.

This is why I am a pluralist, because whatever you do construct, or inhabit, is its own world of created existence. It is equivalent to the social anthropologist who accepts that one culture cannot be described in terms of another culture. Thus reporting back is inevitably an essay in one's own culture, and you'd better just read the essay as a report of an attempt to absorb and an attempt to translate, but inevitably the culture forms its own entity.

The alternative to that is to be a structuralist, and point out where structures of cultures repeat themselves and thus structure (ultimately binary) is objective. But is structure the be all and end all of existence? Not really, given the depth of thought - and poststructuralism is its active critic.

The old meaning of universalist is the person who's accepted that God would save everyone. Hick's own writing is in terms of salvation; the newer meaning of universalist is someone who brings the faiths together as each being a side of one mountain. They are all thus of the same thing, ultimately, and that is climbing the mountain upwards (and being saved at the top).

But the theological real is unitarian, small u, and the salvation business is the universalist.

Unitarian, large U, is a denomination that accepts that people will evolve their own beliefs and that beliefs evolve. Thus it is creedless and it brings individuals of difference together. Unitarianism did once have a theological unitarian period, of liberal biblical Christians, but that period was superseded by romantics of biblical criticism for whom the Bible was not the key source of faith but the individual. That is the later

Free Christian tradition, and the one that tips over into Religious Humanism and interfaith - indeed, individual subjectivity.

The debates generated by the likes of D'Costa and Newbigin are Christian trinitarians asking how much other people are saved beyond themselves (should they be so lucky). But those of us outside their net are not going to be rated on their terms. D'Costa is as bad as the rest of them, like Newbigin, and is only talking to his own audience.

Now John Hick claims to be Christian, but he is Christian on a subjective basis (and he is not a postmodernist: he retains objective and subjective - the objective is ultimately the Real). So that is fine in so far as he is not judging others by particular criteria. Unfortunately he is still having other faiths function according to superior criteria than they themselves provide.

As a pluralist I say that my package is but its own entity, and I know that my use of Buddhism is not the same as Buddhists using it, nor Christianity nor humanism, but I have plenty to talk about with followers of these three and other users of these three. For example, there are Unitarians who box these up together, and there are esoteric Liberal Christians (once of the Theosophical tradition) who come close in their use of Buddhism and Christianity). But it is just a series of dialogues because, as with Unitarianism, I value difference together. We are social beings after all.

For reasons of historiography and how postmodernism emphasises text I cannot be any sort of Christian exclusivist or inclusivist, and indeed do not believe in a doctrinal Jesus Christ at all. He is a first century, mistaken, last days rabbi for whom we have little historical data, and I am not prepared to turn him into a cosmic Christ. There is no cult of the individual that I find attractive, and even most Buddhists didn't turn Buddha into a figure to be deified (a statue of the Buddha in a worship room should be treated as if Buddha is present on the basis that this makes the meditation more serious - a huge as if being involved). I think there are possibilities of transcendence, and that is a much broader matter. On this I overlap with Hick, but I remain closer to Don Cupitt because religious language is closest to the artistic about which one might think one knows about high art but all stacking up is going to be without foundation in Western realist terms. The other basis is to just get on with doing the spirituality, which isn't Western realism at all, but it might be Eastern realised realism...
Posted by Pluralist (Adrian Worsfold) at 01:46